This etext was produced from Astounding Science Fiction, January, 1960. Extensive research did not reveal any evidence that the U.S. copyright on this publication was renewed.

Minor typographical errors have been corrected without note. Dialect spellings, contractions and discrepancies have been retained.

Legends do, of course, get somewhat distorted in the passage of time. In the future, the passage across space to other planets may cause a slight modification here and there ...

President O'Hanrahan of the planetary government of Eire listened unhappily to his official guest. He had to, because Sean O'Donohue was chairman of the Dail—of Eire on Earth—Committee on the Condition of the Planet Eire. He could cut off all support from the still-struggling colony if he chose. He was short and opinionated, he had sharp, gimlet eyes, he had bristling white hair that once had been red, and he was the grandfather of Moira O'Donohue, who'd traveled to Eire with him on a very uncomfortable spaceship. That last was a mark in his favor, but now he stood four-square upon the sagging porch of the presidential mansion of Eire, and laid down the law.

"I've been here three days." he told the president sternly, while his granddaughter looked sympathetic, "and I'm of the opinion that there's been shenanigans goin' on to keep this fine world from becoming' what it was meant for—a place for the people of Eire on Earth to emigrate to when there was more of them than Erin has room for. Which is now!"

"This world should be ready!" snapped Sean O'Donohue accusingly. "It should be waitin' for the Caseys and Bradys and Fitzpatricks and other fine Erse people to move to and thrive on while the rest of the galaxy goes to pot with its new-fangled notions. That's the reason for this world's very existence. What set aside Erin on Earth, where our ancestors lived an' where their descendants are breathin' down each other's necks because there's so many of them? There was no snakes there! St. Patrick drove them out. What sets this world apart from all the other livable planets men have put down their smelly spaceships on? There's no snakes here! St. Patrick has great influence up in Heaven. He knew his fine Erse people would presently need more room than there was on Earth for them. So he'd a world set aside, and marked by the sign that no least trace of a serpent could exist on it. No creature like the one that blarneyed Mother Eve could be here! No——"

"Our trouble's been dinies," began the president apologetically.

Like all Eire, he undoubtedly knew of the pious tradition that St. Patrick had brought the snakes to Eire, and he wasn't one to let St. Patrick down. So he'd returned and doubtless patrolled all the diny tunnels in the sagging structure. He'd cleaned out any miniature, dinosaurlike creatures who might be planning to eat some more nails. He now prepared to nap, with a clear conscience. But if Sean O'Donohue saw him—!

Perspiration stood out on President O'Hanrahan's forehead. The droplets joined and ran down his nose.

"It's evident," said the chairman of the Dail Committee, with truculence, "that we're a pack of worthless, finagling' and maybe even Protestant renegades from the ways an' the traditions of your fathers! There is been shenanigans goin' on! I'll find 'em!"

The president could not speak, with Timothy in full view. But then what was practically a miracle took place. A diny popped out of a hole in the turf. He looked interestedly about. He was all of three inches long, with red eyes and a blue tail, and in every proportion he was a miniature of the extinct dinosaurs of Earth. But he was an improved model. The dinies of Eire were fitted by evolution—or Satan—to plague human settlers. They ate their crops, destroyed their homes, devoured their tools, and when other comestibles turned up they'd take care of them, too.

This diny surveyed its surroundings. The presidential mansion looked promising. The diny moved toward it. But Timothy—nap plans abandoned—flung himself at the diny like the crack of a whip. The diny plunged back into its hole. Timothy hurtled after it in pursuit. He disappeared.

The president of Eire breathed. He'd neglected that matter for some minutes, it seemed. He heard a voice continuing, formidably:

"And I know ye'll try to hide the shenanigans that've destroyed all the sacrifices Earth's made to have Eire a true Erse colony, ready for Erse lads and colleens to move to and have room for their children and their grandchildren too. I know ye'll try! But unless I do find out—not another bit of help will this colony get from Earth! No more tools! No more machinery that ye can't have worn out! No more provisions that ye should be raisin' for yourselves! Your cold-storage plant should be bulgin' with food! It's near empty! It will not be refilled! And even the ship that we pay to have stop here every three months, for mail—no ship!"

"It's the dinies," said the president feebly. "They're a great trouble to us, sir. They're our great handicap."

"Blather and nonsense!" snapped Sean O'Donohue. "They're no bigger than mice! Ye could've trapped 'em! Ye could've raised cats! Don't tell me that fancy-colored little lizards could hinder a world especially set aside by the intercession of St. Patrick for the Erse people to thrive on! The token's plain! There's no snakes! And with such a sign to go by, there must've been shenanigans goin' on to make things go wrong! And till those shenanigans are exposed an' stopped—there'll be no more help from Earth for ye blaggards!"

He stamped his way into the presidential mansion. The door slammed shut. Moira, his granddaughter, regarded the president with sympathy. He looked bedraggled and crushed. He mopped his forehead. He did not raise his eyes to her. It was bad enough to be president of a planetary government that couldn't even pay his salary, so there were patches in his breeches that Moira must have noticed. It was worse that the colony was, as a whole, entirely too much like the remaining shanty areas in Eire back on Earth. But it was tragic that it was ridiculous for any man on Eire to ask a girl from Earth to join him on so unpromising a planet.

He moved away, his chin sunk on his breast. Moira watched him go. She didn't seem happy. Then, fifty yards from the mansion, a luridly colored something leaped out of a hole. It was a diny some eight inches long, in enough of a hurry to say that something appalling was after it. It landed before the president and took off again for some far horizon. Then something sinuous and black dropped out of a tree upon it and instantly violent action took place in a patch of dust. A small cloud arose. The president watched, with morbid interest, as the sporting event took place.

Moira stared, incredulous. Then, out of the hole from which the diny had leaped, a dark round head appeared. It could have been Timothy. But he saw that this diny was disposed of. That was that. Timothy—if it was Timothy—withdrew to search further among diny tunnels about the presidential mansion.

Half an hour later the president told the solicitor general of Eire about it. He was bitter.

"And when it was over, there was Moira starin' dazed-like from the porch, and the be-damned snake picked up the diny it'd killed and started off to dine on it in private. But I was in the way. So the snake waited, polite, with the diny in its mouth, for me to move on. But it looked exactly like he'd brought over the diny for me to admire, like a cat'll show dead mice to a person she thinks will be interested!"

"I reason," said the president morbidly, "she'll tell her grandfather, and he'll collar somebody and use those gimlet eyes on him and the poor omadhoum will blurt out that on Eire here it's known that St. Patrick brought the snakes and is the more reverenced for it. And that'll mean there'll be no more ships or food or tools from Earth, and it'll be lucky if we're evacuated before the planet's left abandoned."

The solicitor general's expression became one of pure hopelessness.

"Then the jig's up," he said gloomily. "I'm thinkin', Mr. President, we'd better have a cabinet meeting on it."

"What's the use," demanded the president. "I won't leave! I'll stay here, alone though I may be. There's nothing left in life for me anywhere, but at least, as the only human left on Eire I'll be able to spend the rest of my years knockin' dinies on the head for what they've done!" Then, suddenly, he bellowed. "Who let loose the snakes! I'll have his heart's blood——"

The Chancellor of the Exchequer peered around the edge of the door into the cabinet meeting room. He saw the rest of the cabinet of Eire assembled. Relieved, he entered. Something stirred in his pocket and he pulled out a reproachful snake. He said:

"Don't be indignant, now! You were walkin' on the public street. If Sean O'Donohue had seen you——" He added to the other members of the cabinet: "The other two members of the Dail Committee seem to be good, honest, drinkin' men. One of them now—the shipbuilder I think it was—wanted a change of scenery from lookin' at the bottom of a glass. I took him for a walk. I showed him a bunch of dinies playin' leapfrog tryin' to get one of their number up to a rain spout so he could bite off pieces and drop 'em down to the rest. They were all colors and it was quite somethin' to look at. The committeeman—good man that he is!—staggered a bit and looked again and said grave that whatever of evil might be said of Eire, nobody could deny that its whisky had imagination!"

He looked about the cabinet room. There was a hole in the baseboard underneath the sculptured coat of arms of the colony world. He put the snake down on the floor beside the hole. With an air of offended dignity, the snake slithered into the dark opening.

"Now—what's the meeting for?" he demanded. "I'll tell you immediate that if money's required it's impractical."

"'Twas called, it seems, to put the curse o' Cromwell on whoever let the black snakes loose. But they'd been cooped up, and they knew they were not keepin' the dinies down, and they got worried over the work they were neglectin'. So they took turns diggin', like prisoners in a penitentiary, and presently they broke out and like the faithful creatures they are they set anxious to work on their backlog of diny-catchin'. Which they're doin'. They've ruined us entirely, but they meant well."

The minister of Information asked apprehensively: "What 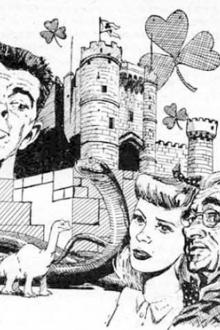 The Dialect of the West of England; Particularly Somersetshire by James Jennings (the mitten read aloud TXT) 📕 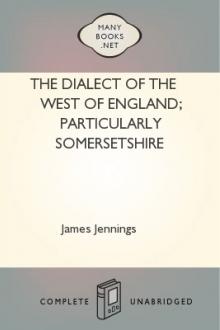