STAND BY FOR MARS!

ON THE TRAIL OF THE SPACE PIRATES

THE REVOLT ON VENUS


PRINTED IN THE UNITED STATES OF AMERICA

Extensive search has failed to uncover any evidence of renewal of copyright of this work.

With a hollow booming sound reminiscent of old eighteenth-and nineteenth-century clock towers, the electronic time tone rang out from the Tower of Galileo, chiming the hour of nine. As the notes reverberated over the vast expanse of Space Academy, U.S.A., the lights in the windows of the cadet dormitories began to wink out and the slidewalks that crisscrossed the campus, connecting the various buildings, rumbled to a halt. When the last mournful note had rolled away to die in the distant hills, the school was dark and still. The only movement to be seen was the slow pacing of the cadet watch officers, patrolling their beats; the only sound, the measured clicking of their boots on the metal strips of the slidewalks.

On the north side of the quadrangle near the Tower, a young watch officer paused in front of one of the dormitories and scanned the darkened windows of the durasteel and crystal building. Satisfied that all was in order, he continued on his lonely way. A moment later[Pg 2] a shadowy figure rose out of the bushes opposite the dormitory entrance and stepped forward quickly and cautiously. Pausing on the slidewalk to stare after the disappearing watch officer, the figure was illuminated by the dim light from the entrance hall. He was a young man wearing the royal-blue uniform of a Space Cadet. Tall and wiry, with square features topped by a shock of close-cropped blond hair, he stood poised on the balls of his feet, ready to move quickly should another watch officer appear.

After a quick glance at his wrist chronometer, the young cadet darted across the slidewalk toward the transparent crystal portal of the dormitory. Hesitating only long enough to make certain that the inner hallway was clear, he slid the portal open, ducked inside, and sprinted down the hall toward a large black panel on the wall near the foot of the slidestairs. On the panel, in five long columns, were the name plates of every cadet quartered in the dormitory and beside each plate were two words, IN and OUT, with a small tab that fitted over one of the words.

Out of the one hundred and fifty cadets in the dormitory, one hundred and forty-nine were marked IN. The slender, blond-haired cadet quickly made it unanimous, reaching up to the tab next to the name of Roger Manning and sliding it over to cover the word OUT. With a last final look around, he raced up the slidestairs, smiling in secret triumph.

In Room 512 on the fifth floor of the dormitory, Tom Corbett and Astro, the two other cadets who, with Roger Manning, made up the famed Polaris unit of the[Pg 3] Space Cadet Corps, were deep in their studies. Though the lights-out order had been given over the dormitory loud-speaker system, the desk lamp burned brightly and there was a blanket thrown over the window. The boys of the Polaris unit weren't alone in their disobedience. All over the dormitory, lights were on and cadets were studying secretly. But they all felt fairly safe, for the cadet watch officers on each floor were anxious to study themselves and turned a blind eye. Even the Solar Guard officer of the day, in charge of the entire dormitory, was sympathetic to their efforts and made a great deal of unnecessary noise while on his evening rounds.

His brown curly hair falling over his forehead, Tom Corbett frowned in concentration as he kept the earphones of his study machine clamped tightly to his ears and listened to a recorded lecture on astrophysics as it unreeled from the spinning study spool. As command cadet of the Polaris unit, Tom was required to know more than merely his particular duty as pilot of a rocket ship. He had to be familiar with every phase of space travel, with a working knowledge of the duties of all his unit mates.

Astro, the power-deck officer of the unit, paced back and forth between the bunks like a huge, hulking bear, muttering to himself as he tried to memorize the table of reaction times for rocket motors. Though the huge Venusian cadet was a genius at all mechanical tasks, and able to work with tools the way a surgeon worked with instruments, he had great difficulty in learning the theories and scientific reasons for all the things he did[Pg 4] instinctively. Suddenly Astro stopped, looked at his chronometer, then turned to Tom.

"Huh?" replied Tom, lifting one of the earphones from his ears. "What did you say, Astro?"

"Where's Manning?" reiterated Astro. "It's ten minutes after lights out."

"He was going to get those study spools for us, wasn't he?" mused Tom.

"He should've been back by now," grunted the Venusian. "The library closed an hour ago. Besides, he couldn't have gotten those spools. Every other cadet in the Academy is after them."

"Well, he's a pretty resourceful joker," sighed Tom, turning back to the study machine. "When he goes after something, he gets it by hook or crook."

"It's the crook part that bothers me," grumbled Astro. "Besides, if the O.D. catches him out of quarters, he'll be doing his studying while he's polishing up the mess hall."

Suddenly the door to the room burst open and slammed closed. Tom and Astro whirled to see their missing unit mate lounging against the doorframe, grinning broadly.

"Where've you been, blast you?"

Tom and Astro both jumped forward and spoke at the same time. The blond-haired cadet merely looked at them lazily and then sauntered forward, pulling six small study spools from his pockets.[Pg 5]

"You wanted these study spools, didn't you?" he drawled, giving his unit mates three apiece. "Be my guest and study like mad."

Tom and Astro quickly read the titles of the spools and then looked at Roger in amazement. They were the ones the unit needed for their end-term exams, the ones all the cadets needed.

"Roger," Tom demanded, "how did you get these spools? The library was out of them this afternoon. Did you take them from another unit's quarters?"

"I did not!" said Roger stoutly. "And I don't like your insinuations that I would." He grinned. "Relax! We have them and we can breeze through them in the morning and have them back where they belong by noon tomorrow."

"Where they belong!" Tom exclaimed. "Then you have no right to them."

"Listen, hot-shot!" growled Astro. "I want to know where you got these spools and how."

"Well, if that isn't gratitude for you!" muttered Roger. "I go out and risk my neck for my dear beloved unit mates and they stand around arguing instead of buckling down to study."

"This is no joke, Roger," said Tom seriously. "Now for the last time, will you tell us how you got them?"

Roger thought a moment and then shrugged his shoulders. "All right," he said finally. "When I went down to the library to see if it was our turn for them yet, I found that we were still twenty-seventh in line."

"That's right, spaceboy!" snorted Roger. "So I tried to[Pg 6] con that little space doll of a librarian into moving our names up on the list, but just then an Earthworm cadet came in with an order from Tony Richards of the Capella unit, an order for the very spools we needed."

"You mean, you took them from an Earthworm?" queried Tom.

"Well, I didn't take them exactly," replied Roger. "I waited for him out on the quadrangle and I told him he was wanted in the cadet dispatcher's office right away and that I would take the spools on up to Tony."

"And you brought them here!" howled Astro.

"Yup." Roger grinned. "Do you think that squirt will know who I am? Not in a million years. And by the time Tony and the others do find out who has them, we'll be finished. Get it?"

"I get it, all right, you crummy little chiseler," growled Astro. "Tom, we gotta give these back to Tony."

"Now wait a minute!" said Roger angrily. "I went to a lot of trouble to get these things for you—"

"Look, Roger," Tom interrupted, "I would rather have one night with those spools than a two-week leave in Atom City right now. But the Capella unit is having a tough time making the Spring passing lists. They need those spools more than we do."

"Yeah," said Astro. "We could probably take the tests now and pass, but they really have to study. I'm for getting them back to the Capella unit right now. How about you, Tom?"

The young cadet nodded and turned to Roger who stood there, frowning. "Roger," said Tom, "both Astro[Pg 7] and I really appreciate it. But you wouldn't want the Capella unit to flunk out of the Academy, would you?"

Roger gnawed at his thumbnail and then looked at his two unit mates sheepishly. "You're right, fellas," he said. "It was kind of a dirty trick. Give me the spools. I'll take them back to Tony right now."

"Wait a minute!" exclaimed Astro. "It's after hours. We're not supposed to be out of the dorm."

For a second the three boys looked at each other hesitantly. Then, as though they had telepathically conveyed their individual decisions to each other, they turned toward the door. Tom opened it and stepped out into the hall cautiously, then turned back and nodded. Roger and Astro followed him quickly.

As Roger closed the door behind him, he murmured, "There's no reason for all of us to go. I was the one who took the spools, so I should bring them back. Why should you two guys risk getting caught?"

Astro punched him in the shoulder fondly. "We always work together, don't we?" he declared. "If one's gonna get into trouble, we all should."

"Let's go," urged Tom in a sharp whisper, and they all raced silently toward the slidestairs.

Seconds later, the three cadets of the Polaris unit were down in the main hallway of the dormitory building, tiptoeing toward the front portal. Pausing only to look into the O.D.'s office to make sure the officer wouldn't spot them, they reached the portal and ducked out. Pausing again to scan the immediate area for any watch officers, they darted across the slidewalk and into the shadows of the shrubbery.[Pg 8]

Quickly and soundlessly, they raced across the green lawn of the quadrangle toward the dormitory where the Capella unit was quartered. Once they sprawled headlong on the turf and lay still as a watch officer suddenly appeared out of the darkness at the base of the Tower of Galileo. But he walked past without seeing them and they continued on across the quadrangle.

Reaching another clump of shrubbery right opposite the Capella unit's dormitory, the boys stopped and discussed their final move.

"This is getting ridiculous," whispered Roger. "I shouldn't have let you two come with me. But I'm going the rest of the way myself."

"We came this far, Roger," asserted Tom. "We'll go the rest of the way and 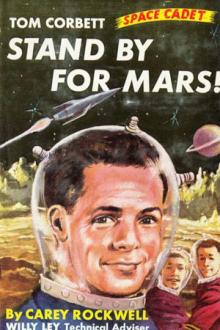 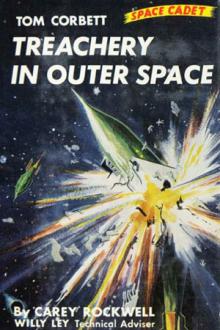 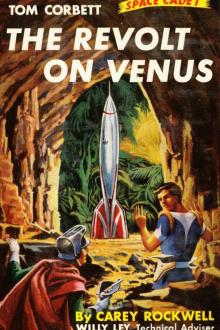 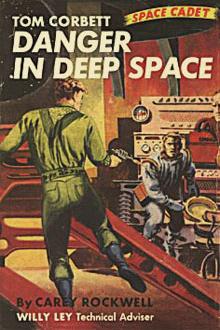