"In Shaman we live again an all but-forgotten chapter of American history, replete with adventure, violence, and eroticism—the compelling and often horrific account of a collision between two cultures so different that one of them has to be wiped off the face of the earth."

ALL THINGS ARE LIGHTS

THE SARACEN: LAND OF THE INFIDEL

THE SARACEN: THE HOLY WAR

All rights reserved under International and Pan-American Copyright Conventions. Published in the United States by Ballantine Books, a division of Random House, Inc., New York, and simultaneously in Canada by Random House of Canada Limited, Toronto.

Transcriber's Note: Minor typographical errors have been corrected without note. Variant spellings remain as printed, whilst inconsistent hyphenation has been standardised.

Thanks to Michael Shea for giving Project Gutenberg permission to distribute Shaman.

Although not present in the original publication, the following list of contents has been provided for convenience:

I'm most grateful for the help given me by Paul Brickman, Julie Garriott, David Hickey, the Illinois Historical Society, Jim and Paula Pettorini, George Weinard, Timothy J. Wheeler, and the Wisconsin Historical Society. And a special word of thanks to my bonnie wife, Yvonne Shea, who, having a sharp eye for a fine old book, brought Thomas Ford's History of Illinois into our home.

"Rock River was beautiful country. I loved my towns, my cornfields and the home of my people. I fought for them."

1
The Lodge of the Turtle

The black bearskin, softened by countless wearings, clasped Gray Cloud's arms and shoulders, protecting his body from the cold that cut like knives into his cheeks and forehead. The upper half of the bear's skull covered his head and weighed heavily on it, as heavily as the awful fear of the vision quest weighed on his spirit.

His moccasins whispered over the fallen brown grass that covered the trail. He had walked a long way, and his toes were numb in spite of the leaves stuffed into the moccasins.

Abruptly the path stopped, and he was facing sky. He stood at the edge of the bluff looking eastward over the frozen Great River. He gripped the deerhorn handle of his hunting knife.

For the feeling of strength it gave him, he slid the knife out of the sheath of hardened leather tied to his waist. The steel blade glistened, colorless as the sky above him, in the fading light.

The knife my father left for me, he thought. Where are you tonight, my father?

The clouds seemed close enough to touch. They rippled like snowdrifts painted with light and shadow. Upriver the sky was darkened almost to black, and Gray Cloud smelled snow in the air.

He saw the silhouette of a hawk, wing-tip feathers spread, circling over the Illinois country across the river, hunting in the last moments before nightfall.

Hawk spirit, help me to live through this testing. Help me to see a great vision and grow to be a mighty shaman.[4]

The tiny spot of black dwindled in the sky, till he could no longer see it.

Perhaps it flies over the winter silence of Saukenuk village.

He sheathed the knife. Turning his back on sky and river, he looked westward over the way he had come. A prairie of waving tan grass almost as high as his head stretched as far as he could see. Killed by the cold, the grass yet stood, held up by the stiffness in its dead stalks. Like a fur cloak, the brown covered the hills that rolled away to the west.

He could not see his people's winter hunting camp from here; it nestled back among those hills, sheltered in a forest that grew along the Ioway River. Looking in its direction, he saw Redbird in his mind. Her eyes, black as obsidian arrowheads, shone at him. He felt a powerful yearning just to see her, to speak to her and hear her voice, to touch her cheek with his fingertips. The thought that he might never see her again, never go back to his people, chilled him more than the winter cold.

O Earthmaker, grant that I live to return to Redbird.

He knelt and peered over the edge of the bluff, the bearskin cloak bunching around him. Gray limestone, wrinkled and pitted like the face of an old man, swept down to dark masses of leafless shrubbery at the river's edge. His eyes searched out and then found an especially black shadow in the bluff wall. If he had come any later on this day, he might not have been able to find the cave mouth in the dark.

Then he might have had to wait till morning. Or, trying to climb down to it, he might have missed the way and fallen to his death. A cold hollow swelled in his belly. It would be so easy to slip.

Enough of what might have been. It was what would be that frightened him now. He might die, not of falling, but of what he found in the cave.

Or what found him.

Forcing that thought, too, out of his mind, he lowered his body over the edge of the bluff, dug his toes into footholds and carefully climbed sideways and downward. In places, the path along the bluff face widened out and was almost as easy to walk on as a forest trail. But then the crumbling stone would slant steeply, so that he had to grip hard with his buckskin-shod feet, feeling as if he were clinging to nothing at all.[5]

A wide ledge spread before the entrance to the sacred cave. He let out a breath of deep relief as his feet stepped firmly on the flat stone.

From outside he could see nothing of the cave. But when he entered, he felt a sudden warmth, as if he were walking into a well-sealed lodge with a bright fire going. He could smell old fires—and something else. An animal smell that sent a ripple of cold through his bones. But not a fresh smell. He thanked Earthmaker for that, because he was sure it was the smell of bear.

But Owl Carver had been using this cave for his vision quests for winters beyond counting. And he had never spoken of a bear.

Gray Cloud stood uncertain in the entryway, letting his eyes adjust to the darkness. He saw round, gleaming shapes clustered against the back wall, and a motionless figure about as high as a man's waist, with a sharply curved beak and spreading wings.

Again, seeing these things, he felt the coldness of fear. Now he saw that the round objects on the floor were skulls, and he knew them for the skulls of ancestors, great men and women of the tribe. Green and white stones that had long ago been necklaces glittered around the jaws of the great dead ones. And the winged figure standing over them was the Owl spirit, who guided the footsteps of the dead along the Trail of Souls. Owl Carver had earned his name by carving this statue of the spirit and setting it here.

From a pouch tied to his belt Gray Cloud took a handful of sacred tobacco grains and sprinkled them on the cave floor as an offering.

He said, "Give me leave to enter your cave, Fathers and Mothers. You know me. I am your child."

He hesitated. Only through his mother, Sun Woman, was he the child of these ancestors who guarded the sacred cave. His father was a pale eyes, and the pale eyes had no ancestors. Would the ancestors reject him?

There was no sign or sound from the skulls on the floor, but now he could see farther into the shadows, and he saw that the cave went on around a bend, and that bend was guarded by another sacred figure. He peered at the shadowy figure for a moment and decided that it was a bear, but a bear such as he had never seen before. From head to foot this bear was white. Owl Carver had said nothing about this statue.[6]

He sighed in his dread, feeling a trembling in his stomach.

It was good for him to be here, he tried to tell himself. He had come here to learn the shaman's secrets. This was the moment he had dreamed of ever since the first time he had seen Owl Carver, with his long white hair and his necklace of small shells of the lake-dwelling megis and his owl-crested cedar stick, step into the firelight. That long-ago night Owl Carver had spoken, not with the voice of a man, but with the voice of a spirit, an eerily high-pitched singsong that frightened and fascinated Gray Cloud.

The shaman of the tribe was greater than the bravest brave, greater than any chief. He had the power to heal the sick and to foretell the future. Gray Cloud wanted to stand high among the Sauk and to go where the shaman went, into the spirit world. He wanted to penetrate the deepest mysteries and know the answer to every question.

After he began teaching Gray Cloud, Owl Carver had tried to discourage him—as a way of testing him, Gray Cloud was sure.

Owl Carver had said, Many times the people do not want to listen to the shaman. The truer his words, the less they hear him.

The warning had disturbed Gray Cloud. But he never saw the people refuse to listen to Owl Carver. And he did not lose his determination to become a shaman himself.

No one could gain such a great reward without risk. A warrior must kill an enemy at great peril to himself to gain the right to wear the eagle feather that marked him as a brave. A hunter had to kill an animal that could kill him before the tribe would consider him a man.

How, then, could one speak to these spirits of the tribe unless he, too, had faced death?

But what kind of a death? Would he freeze and starve here in this cave, his dead body remaining until Owl Carver came and found it? Or would an evil spirit come and kill him?

Whatever might come, he could only sit and wait for it in the way that Owl Carver had taught him.

He turned his back on the unknown depths of the cave and seated himself at its entrance, pulling the bearskin cloak around him for warmth. He dipped his fingers into a pouch at his belt and took out the bits of dried mushroom Owl Carver had given him from a medicine bag decorated with a beadwork owl. The sacred mushrooms[7] grew somewhere far to the south and were traded up the Great River. One by one he put them into his mouth and slowly chewed them.

You do not need to swallow, Owl Carver had said. Hold them in your mouth until they slide down your throat without your knowing how it happened.

His mouth grew dry as the mushrooms turned to paste. And it was as Owl Carver had said; they were gone without his knowing when they disappeared into his body.

His stomach heaved once and he thought with terror that he might fail this first small test. But he held his breath and slowly the sick feeling died away.

The last light faded from the sky, and the far horizon across the river vanished. Blackness fell upon him like a blanket, thick, impenetrable. It pressed against his face, suffocating him. 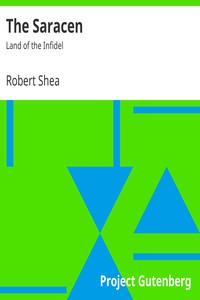 The Saracen: The Holy War by Robert Shea (novels for beginners .TXT) 📕 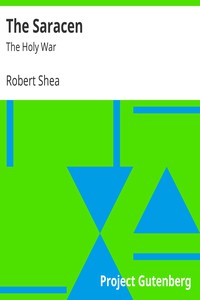 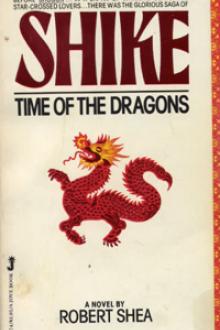