FUTURIA FANTASIA IS PUBLISHED IRREGULARLY AND GESTATED AT THE DOW-JONES BUYING LEVEL OF TEN CENTS AN ISSUE. THE FIFTH ISSUE WILL BE SCARING YOU AROUND ABOUT HALLOWEEN—SEND YOUR DIME TO EDITOR BRADBURY AT #3054 1/2 W. 12th St. Los Angeles, Calif. CONTRIBUTIONS WILL BE HAPPILY FONDLED AND SEWED UP IN A GREEN VELVET SACK. ALL STORIES SUBMITTED MUST BE SHAVED AND IN THE COMPANY OF ADULT MARTIANS.

"Let us, by all means, be lucid," said Gorgono to Slith. Slith fluttered his reptile tongue and turned his morbid eyes to me. "Yes," he said, "let us, certainly be lucid, Bradbury. From now on use a contents page in Futuria Fantasia." And he spanked his tail slickly on my typewriter.

I don't mind Slith so much, he's only a little anachronistic reptile, a descendent of happier days in dinosaurial dawndom. I never feared Slith. But Gorgono!

Gorgono pierced me with his slanting green, clear eyes, heavy-lidded, extending one claw and attempting to keep it from shaking while his pointed ears stood up straight. A moment before he had been hunting fleas in the fertile hair that clothed his muscular limbs, but now he was serious; so very serious it frightened me.

And when the thunder-voiced, evil-eyed, shaggy haired and monstrous Gorgono reclined on the shelf over my head, saliva drooling with silent precision from his pendulous lips, and gave orders I hastened to obey them. Gorgono was the voice of the critics—the ogre of opinion, the harsh guttural commandment of style and fashion. And now Gorgono had grumbled, "Number your pages from now on, MISTER Bradbury or else YOUR number'll be up. Why, Gad, man, the last issue of Futuria Fantasia I didn't know if I was coming or going, the way you heiroglyphed the sheets. And I might add, you're going to use even margins from here on in."

"Okay, okay, okay," I said, slinking with flushed visage behind my stencils. "But from now on Futuria Fantasia will be ten cents straight an issue. Ten cents straight." "Agreed," snapped Gorgono, "if you are neater. But you must be new, neotiric, different." Then I flashed them the newly processed cover done by Bok. "Gods!" bellowed Gorgono. "That is stupendous! A fine beginning, mortal, a very fine beginning!" Slith agreed by pounding vigorously on the table with his scaly rump. "And wait until you read Monroe's yarn," I jubilantly exclaimed. "It's not science-fiction, but it's certainly a fine bit of story." "Yes," said Gorgono, "this issue looks much better. Glad to see you've added two new authors, Damon Knight and Joe Kelleam from Astounding. I'll have to remind the fans to send in their dimes for this issue and perhaps support you a little more than they have with letters. But we'll see about that." He got up, stretched, yawned, and vanished in a belching ball of flame. "Yes," said Slith, "we'll see!" And he too vanished with a sharp pop. All was quiet. I went back to my stencils and my opium.

"How dare you make such a suggestion!"

The state physician doggedly stuck by his position. "I would not make it, sire, it your life were not at stake. There is no other surgeon in the Fatherland who can transplant a pituitary gland but Doctor Lans."

The medico shook his head. "You would die, Leader. My skill is not adequate. And unless the operation takes place at once, you will certainly die."

The Leader stormed about the apartment. He seemed about to give way to one of the girlish bursts of anger that even the inner state clique feared so much. Surprisingly he capitulated.

"Bring him here!" he ordered.

DOCTOR LANS FACED THE LEADER with inherent dignity, a dignity and presence that three years of "protective custody" had been unable to shake. The pallor and gauntness of the concentration camp lay upon him, but his race was used to oppression. "I see," he said. "Yes, I see ... I can perform that operation. What are your terms?"

"Terms?" The Leader was aghast. "Terms, you filthy swine? You are being given a chance to redeem in part the sins of your race!"

The surgeon raised his brows. "Do you not think I know that you would not have sent for me had there been any other course available to you? Obviously, my services have become valuable."

"You'll do as you are told! You and your kind are lucky to be alive."

"Nevertheless I shall not operate without my fee."

"I said you were lucky to be alive—" The tone was an open threat.

The Leader smiled. "True. But I am informed that you have a—a family...."

The surgeon moistened his lips. His Emma—they would hurt his Emma ... and his little Rose. But he must be brave, as Emma would have him be. He was playing for high stakes—for all of them. "They cannot be worse off dead," he answered firmly, "than they are now."

It was many hours before the Leader was convinced that Lans could not be budged. He should have known—the surgeon had learned fortitude at his mother's breast.

"A passport for myself and my family."

"My personal fortune restored to me—"

"—to be paid in gold before I operate!"

The Leader started to object automatically, then checked himself quickly. Let the presumptuous fool think so! It could be corrected after the operation.

"And the operation to take place in a hospital on foreign soil."

Lans stared straight back into his eyes without replying. The Leader struck him, hard, across the mouth. The surgeon made no effort to avoid the blow, but took it, with no change of expression.

"YOU ARE WILLING TO GO THROUGH WITH IT, SAMUEL?" The younger man looked at Doctor Lans without fear as he answered,

"I can not guarantee that you will recover. The Leader's pituitary gland is diseased; when I exchange it for your healthy one your younger one may not be able to stand up under it—that is the chance you take. Besides—a complete transplanting has never been done before."

"I know it—but I'm out of the concentration camp!"

"Yes. Yes, that is true. And if you do recover, you are free. And I will attend you myself, until you are well enough to travel."

Samuel smiled. "It will be a positive joy to be sick in a country where there are no concentration camps!"

"Very well, then. Let us commence."

They returned to the silent, nervous group at the other end of the room. Grimly the money was counted out, every penny that the famous surgeon had laid claim to before the Leader had decided that men of his religion had no need for money. Lans placed half of the gold in a money belt and strapped it around his waist. His wife concealed the other half somewhere about her ample person.

IT WAS AN hour and twenty minutes later that Lans put down the last instrument, nodded to the surgeons assisting him, and commenced to strip off operating gloves. He took one last look at his two patients before he left the room. They were anonymous under the sterile gowns and dressings. Had he not known, he could not have guessed dictator from oppressed. Come to think of it, with the exchange of those two tiny glands there was something of the dictator in his victim and something of the victim in the dictator.

DOCTOR LANS RETURNED TO THE hospital later in the day, after seeing his wife and daughter safely settled in a first class hotel. It was an extravagence, in view of his uncertain prospects as a refugee, but they had enjoyed no luxuries for years back there—he didn't consider it his home country—and it was justified this once.

He inquired at the office of the hospital for his second patient. The clerk looked puzzled. "But he is not here...."

"Why, no. He was moved at the same time as His Excellency—back to your country."

Lans did not argue. The trick was obvious; it was too late to do anything for poor Samuel. He thanked his God that he had had the foresight to place himself and his family beyond the reach of such brutal injustice before operating. He thanked the clerk and left.

THE LEADER RECOVERED CONSCIOUSNESS AT LAST. His brain was confused—then he recalled the events before he had gone to sleep. The operation!—it was over! And he was alive! He had never admitted to anyone how terribly frightened he had been at the prospect. But he had lived—he had lived! He groped around for the bellcord, and failing to find it, gradually forced his eyes to focus on the room. What outrageous nonsense was this? This was no sort of a room for the Leader to convalesce in. He took in the dirty white-washed ceiling, and the bare wooden floor with distaste. And the bed! It was no more than a cot!

He shouted. Someone came in, a man wearing a uniform of a trooper in his favorite corps. He started to give him the tongue-lashing of his life, before having him arrested. But he was cut short.

"Cut out the racket, you unholy pig!"

At first he was too astounded to answer, then he shrieked, "Stand at attention when you address the Leader! Salute!"

The trooper looked dumbfounded at the sick man—so totally different in appearance from the Leader, then guffawed. He stepped to the cot, struck a pose with his right arm raised in salute. He carried a rubber truncheon in it. "Hail to our Leader!" he shouted, and brought his arm down smartly. The truncheon crashed into the sick man's cheek bone.

Another trooper came in to see what the noise was while the first was still laughing at his wittcism. "What's up, Jon? Say, you'd better not handle that monkey too rough—he's still carried on the hospital list." He glanced casually at the bloody face.

"Him? Didn't you know?" Jon pulled him to one side and whispered.

The second man's eyes widened; he grinned. "So? They don't want him to get well, eh? Well, I could use a little exercise this morning—"

"Let's get Fats," the other suggested. "He's always so very amusing with his ideas."

"Good idea." He stepped to the door and bellowed, "Hey, Fats!"

They didn't really start in on him until Fats was there to help.

the phantoms by——Joseph E. Kellerman
All day they played among the purple flowers
That lay like frozen flames upon the lawn;
Or dreamed within the shadows of the towers
Whose turret tops were painted as the dawn.
Bright was the garden; peace went everywhere
There was no breath of movement nor any sound
Save butterflies that clove the heavy air,
Or when the bright fruit dropped slowly to the ground.
Then the flowers drooped, from sliver thorns that tore;
Too soon the sun had died in amber smoke,
And frightened now but silent as before
The phantoms watched the garden change its cloak.
Great sable moths flew out, and one by one
The towers melted with the fallen sun.


This is a plug for the Voice of the Imagi-nation. price 10c from Box 6475 Met Sta Los Angeles Cal.

THOUGHTS ON THE WORLDSTATE by henry kuttner
The hideous Mr. Kuttner returns with an equally hideous tale. We absolutely guarantee this story will induce nausea and slight regurgitation. Lead on, McKuttner!

I have, as usual, been brooding over the intricacies of modern civilization. It seems to me that life is a peculiarly futile business. This mood of mine may, perhaps, be attributed to my recent tragic encounter with a horse at the corner of 42nd and Broadway.

I shall not dwell upon that incident, save to mention briefly that horses should, 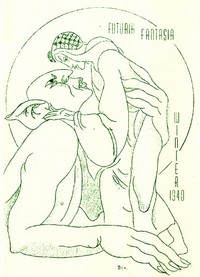 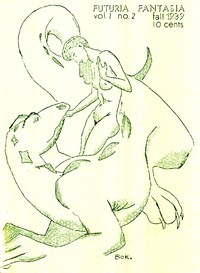 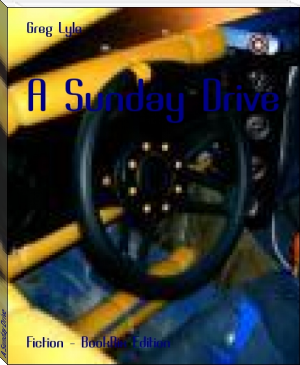