This is a work of fiction. All the characters and events
portrayed in this book are fictional, and any resemblance
to real people or incidents is purely coincidental.

A TRACE OF MEMORY

All rights reserved, including the right to
reproduce this book or portions thereof in any form.

A short version of this novel appeared serially in
Amazing, July-August-September, 1962.
Copyright 1962 by Ziff-Davis Publishing Company.

"Let's get out of here fast," I said. "We've probably set off an alarm already."

As if in answer, a low chime cut across our talk. Pearly light sprang up on a square panel. Foster and I stared at it.

I sat down in the single chair before the dusty control console, and watched a red blip creep across the screen.

"That blip is either a mighty slow airplane—or it's at one hell of an altitude." I sat upright, eyes on the screen. "Look at this, Foster," I snapped. A pattern of dots flashed across the screen, faded, flashed again....

"I don't like that thing blinking at us," I said. "It makes me feel conspicuous." I looked at the big red button beside the screen. "Maybe if I pushed that...." Without waiting to think it over, I jabbed at it.

"I'm not sure you should have done that," Foster said.

"There is room for doubt," I said in a strained voice. "It looks like I've launched a bomb from the ship overhead."

A TRACE OF MEMORY

Look for these other TOR books by Keith Laumer:

He awoke and lay for a moment looking up at a low ceiling, dimly visible in a faint red glow, feeling the hard mat under his back. He turned his head, saw a wall and a panel on which a red indicator light glared.

He swung his legs over the side of the narrow couch and sat up. The room was small, grey-painted, unadorned. Pain throbbed in his forearm. He shook back the loose sleeve of the strange purple garment, saw a pattern of tiny punctures in the skin. He recognized the mark of a feeding Hunter.... Who would have dared?

A dark shape on the floor caught his eye. He slid from the couch, knelt by the still body of a man in a purple tunic stained black with blood. Gently he rolled the body onto its back.

He seized the limp wrist. There was a faint pulse. He rose—and saw a second body and, near the door, two more. Quickly he went to each....

He went to the door, shouted into the darkness. The ranged shelves of a library gave back a brief echo. He turned back to the grey-walled room, noticed a recording monitor against a wall. He fitted the neurodes to the dying man's temples. But for this gesture of recording Ammaerln's life's memories, there was nothing he could do. He must get him to a therapist—and quickly.

He crossed the library, found a great echoing hall beyond. This was not the Sapphire Palace beside the Shallow Sea. The lines were unmistakeable: he was aboard a ship, a far-voyager. Why? How? He stood uncertain. The silence was absolute.

He crossed the Great Hall and entered the observation lounge. Here lay another dead man, by his uniform a member of the crew. He touched a knob and the great screens glowed blue. A giant crescent swam into focus, locked; soft blue against the black of space. Beyond it a smaller companion hung, gray-blotched, airless. What worlds were these?

An hour later he had ranged the vast ship from end to end. In all, seven corpses, cruelly slashed, peopled the silent vessel. In the control sector the communicator lights glowed, but to his call there was no answer from the strange world below.

He turned to the recording room. Ammaerln still breathed weakly. The memory recording had been completed; all that the dying man remembered of his long life was imprinted now in the silver cylinder. It remained only to color-code the trace.

His eyes was caught by a small cylinder projecting from the aperture at the side of the high couch where he had awakened his own memory-trace! So he himself had undergone the Change. He took the color-banded cylinder, thrust it into a pocket—then whirled at a sound. A nest of Hunters, swarming globes of pale light, clustered at the door. Then they were on him. They pressed close, humming in their eagerness. Without the proper weapon he was helpless.

He caught up the limp body of Ammaerln. With the Hunters trailing in a luminous stream he ran with his burden to the shuttle-boat bay.

Three shuttles lay in their cradles. He groped to a switch, his head swimming with the sulphurous reek of the Hunters; light flooded the bay, driving them back. He entered the lifeboat, placed the dying man on a cushioned couch.

It had been long since he had manned the controls of a ship, but he had not forgotten.

Ammaerln was dead when the lifeboat reached the planetary surface. The vessel settled gently and the lock cycled. He looked out at a vista of ragged forest.

This was no civilized world. Only the landing ring and the clearing around it showed the presence of man.

There was a hollow in the earth by a square marker block at the eastern perimeter of the clearing. He hoisted the body of Ammaerln to his back and moved heavily down the access ladder. Working bare-handed, he deepened the hollow, placed the body in it, scraped earth over it. Then he rose and turned back toward the shuttle boat.

Forty feet away, a dozen men, squat, bearded, wrapped in the shaggy hides of beasts, stood between him and the access ladder. The tallest among them shouted, raised a bronze sword threateningly. Behind these, others clustered at the ladder. Motionless he watched as one scrambled up, reached the top, disappeared into the boat. In a moment the savage reappeared at the opening and hurled down handfuls of small bright objects. Shouting, others clambered up to share the loot. The first man again vanished within the boat. Before the foremost of the others had gained the entry, the port closed, shutting off a terrified cry from within.

Men dropped from the ladder as it swung up. The boat rose slowly, angling toward the west, dwindling. The savages shrank back, awed.

The man watched until the tiny blue light was lost against the sky.

I crumpled the newspaper and tossed it in the general direction of the wire basket beside the park bench, pushed back a slightly frayed cuff, and took a look at my bare wrist. It was just habit; the watch was in a hock shop in Tupelo, Mississippi. It didn't matter. I didn't have to know what time it was.

Across the park most of the store windows were dark along the side street. There were no people in sight; they were all home now, having dinner. As I watched, the lights blinked off in the drug store with the bottles of colored water in the window; the left the candy and cigar emporium at the end of the line. I fidgeted on the hard bench and felt for a cigarette I didn't have. I wished the old boy back of the counter would call it a day and go home. As soon as it was dark enough, I was going to rob his store.

I wasn't a full-time stick-up artist. Maybe that's why that nervous feeling was playing around under my rib cage. There was really nothing to it. The wooden door with the hardware counter lock that would open almost as easily without a key as with one; the sardine-can metal box with the day's receipts in it. I'd be on my way to the depot with fare to Miami in my pocket ten minutes after I cracked the door. I'd learned a lot harder tricks than petty larceny back when I had a big future ahead with Army Intelligence. That was a long time ago, and I'd had a lot of breaks since then—none good.

I got up and took another turn around the park. It was a warm evening, and the mosquitoes were out. I caught a whiff of frying hamburger from the Elite Cafe down the street. It reminded me that I hadn't eaten lately. There were lights on at the Commercial Hotel and one in the ticket office at the station. The local police force was still sitting on a stool at the Rexall talking to the counter girl. I could see the .38 revolver hanging down in a worn leather holster at his hip. All of a sudden, I was in a hurry to get it over with.

I took another look at the lights. All the stores were dark now. There was nothing to wait for. I crossed the street, sauntered past the cigar store. There were dusty boxes of stogies in the window and piles of homemade fudge stacked on plates with paper doilies under them. Behind them, the interior of the store looked grim and dead. I looked around, then turned down the side street toward the back door—

A black sedan eased around the corner and pulled in to the curb. A face leaned over to look at me through lenses like the bottoms of tabasco bottles. The hot evening air stirred, and I felt my damp shirt cold against my back.

"Looking for anything in particular, Mister?" the cop said.

I just looked at him.

"Passing through town, are you?" he asked.

For some reason I shook my head.

"What Mr. Foster?" The cop's voice was wheezy, but relentless; a voice used to asking questions.

I remembered the ad—something about an adventure; Foster, Box 19. The cop was still staring at me.

He looked me over some more, then reached across and opened the door. "Better come on down to the station house with me, Mister," he said.

At Police Headquarters, the cop motioned me to a chair, sat down behind a desk, and pulled a phone to him. He dialed slowly, then swiveled his back to me to talk. Insects danced around the bare light bulb. There was an odor of leather and unwashed bedding. I sat and listened to a radio in the distance wailing a sad song.

It was half an hour before I heard a car pull up outside. The man who came through the door was wearing a light suit that was neither new nor freshly pressed, but had that look of perfect fit and taste that only the most expensive tailoring can achieve. He moved in a relaxed way, but gave an impression of power held in reserve. At first glance I thought he was in his middle thirties, but when he looked my way I saw the fine lines around the blue eyes. I got to my feet. He came over to me.

The desk sergeant spoke up. "This fellow says he come here to Mayport to see you, Mr. Foster."

Foster looked at me steadily. "That's right, Sergeant. This gentleman is considering a proposition I've made." 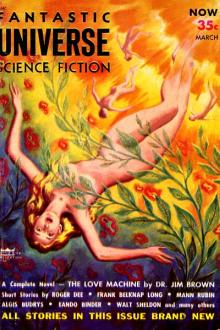