1 2 3 4 5 6 7 8 9 10 ... 34
Go to page:
*** START OF THIS PROJECT GUTENBERG EBOOK ASTOUNDING STORIES, JAN 1931 *** Produced by Greg Weeks, Barbara Tozier and the Online Distributed Proofreading Team at https://www.pgdp.net
This etext was produced from Astounding Stories January 1931. Extensive research did not uncover any evidence that the U.S. copyright on this publication was renewed.
Astounding Stories

That the stories therein are clean, interesting, vivid, by leading writers of the day and purchased under conditions approved by the Authors’ League of America; That such magazines are manufactured in Union shops by American workmen; That each newsdealer and agent is insured a fair profit; That an intelligent censorship guards their advertising pages.

VOL. V, No. 1 CONTENTS JANUARY, 1931 COVER DESIGN H. W. WESSO Painted in Water-Colors from a Scene in “The Gate to Xoran.” THE DARK SIDE OF ANTRI SEWELL PEASLEE WRIGHT 9 Commander John Hanson Relates an Interplanetary Adventure Illustrating the Splendid Service Spirit of the Men of the Special Patrol. THE SUNKEN EMPIRE H. THOMPSON RICH 24 Concerning the Strange Adventures of Professor Stevens with the Antillians on the Floor of the Mysterious Sargasso Sea. THE GATE TO XORAN HAL K. WELLS 46 A Strange Man of Metal Comes to Earth on a Dreadful Mission. THE EYE OF ALLAH C. D. WILLARD 58 On the Fatal Seventh of September a Certain Secret Service Man Sat in the President’s Chair and—Looked Back into the Eye of Allah. THE FIFTH-DIMENSION CATAPULT MURRAY LEINSTER 72 The Story of Tommy Reames’ Extraordinary Rescue of Professor Denham and his Daughter—Marooned in the Fifth Dimension. (A Complete Novelette.) THE PIRATE PLANET CHARLES W. DIFFIN 109 Two Fighting Yankees—War-Torn Earth’s Sole Representatives on Venus—Set Out to Spike the Greatest Gun of All Time. (Part Three of a Four-Part Novel.) THE READERS’ CORNER ALL OF US 132 A Meeting Place for Readers of Astounding Stories.

“Behold one of those who live in the darkness.”

The Dark Side of Antri

Commander John Hanson relates an interplanetary adventure illustrating the splendid Service spirit of the men of the Special Patrol.

An officer of the Special Patrol Service dropped in to see me the other day. He was a young fellow, very sure of himself, and very kindly towards an old man.

He was doing a monograph, he said, for his own amusement, upon the early forms of our present offensive and defensive weapons. Could I tell him about the first Deuber spheres and the earlier disintegrator rays and the crude atomic bombs we tried back when I first entered the Service?

I could, of course. And I did. But a man’s  memory does not improve in the course of a century of Earth years. Our scientists have not been able to keep a man’s brain as fresh as his body, despite all their vaunted progress. There is a lot these deep thinkers, in their great laboratories, don’t know. The whole universe gives them the credit for what’s been done, yet the men of action who carried out the ideas—but I’m getting away from my pert young officer.

He listened to me with interest and toleration. Now and then he helped me out, when my memory failed me on some little detail. He seemed to have a very fair theoretical knowledge of the subject.

“It seems impossible,” he commented, when we had gone over the ground he had outlined, “that the Service could have done its work with such crude and undeveloped weapons, does it not?” He smiled in a superior sort of way, as though to imply we had probably done the best we could, under the circumstances.

I suppose I should not have permitted his attitude to irritate me, but I am an old man, and my life has not been an easy one.

“Youngster,” I said—like many old people, I prefer spoken conversation—“back in those days the Service was handicapped in every way. We lacked weapons, we lacked instruments, we lacked popular support, and backing. But we had men, in those days, who did their work with the tools that were at hand. And we did it well.”

“Yes, sir!” the youngster said hastily—after all, a retired commander in the Special Patrol Service does rate a certain amount of respect, even from these perky youngsters—“I know that, sir. It was the efforts of men like yourself who gave us the proud traditions we have to-day.”

“Well, that’s hardly true,” I corrected him. “I’m not quite so old as that. We had a fine set of traditions when I entered the Service, son. But we did our share to carry them on, I’ll grant you that.”

“‘Nothing Less than Complete Success,’” quoted the lad almost reverently, giving the ancient motto of our service. “That is a fine tradition for a body of men to aspire to, sir.”

“True. True.” The ring in the boy’s voice brought memories flocking. It was a proud motto; as old as I am, the words bring a thrill even now, a thrill comparable only with that which comes from seeing old Earth swell up out of the darkness of space after days of outer emptiness. Old Earth, with her wispy white clouds and her broad seas— Oh, I know I’m provincial, but that is another thing that must be forgiven an old man.

“I imagine, sir,” said the young officer, “that you could tell many a strange story of the Service, and the sacrifices men have made to keep that motto the proud boast it is to-day.”

“Yes,” I told him. “I could do that. I have done so. That is my occupation, now that I have been retired from active service. I—”

“You are a historian?” he broke in eagerly.

I forgave him the interruption. I can still remember my own rather impetuous youth.

“Do I look like a historian?” I think I smiled as I asked him the question, and held out my hands to him. Big brown hands they are, hardened with work, stained and drawn from old acid burns, and the bite of blue electric fire. In my day we worked with crude tools indeed; tools that left their mark upon the workman.

I waved the explanation aside.

“Historians deal with facts, with accomplishments, with dates and places and the names of great men. I write—what little I do write—of men and high adventures, so that in this time of softness and easy living some few who may read my scribblings may live with me those days when the worlds of the universe  were strange to each other, and there were many new things to be found and marveled at.”

“And I’ll venture, sir, that you find much enjoyment in the work,” commented the youngster with a degree of perception with which I had not credited him.

“True. As I write, forgotten faces peer at me through the mists of the years, and strong, friendly voices call to me from out of the past….”

“It must be wonderful to live the old adventures through again,” said the young officer hastily. Youth is always afraid of sentiment in old people. Why this should be, I do not know. But it is so.

The lad—I wish I had made a note of his name; I predict a future for him in the Service—left me alone, then, with the thoughts he had stirred up in my mind.

Strange worlds, strange peoples. A hundred, a thousand different tongues. Men that came only to my knee, and men that towered ten feet above my head. Creatures—possessed of all the attributes of men except physical form—that belonged only in the nightmare realms of sleep.

An old man’s most treasured possessions: his memories. A face drew close out of the flocking recollections; the face of a man I had known and loved more than a brother so many years—dear God, how many years—ago.

Anderson Croy. Search all the voluminous records of the bearded historians, and you will not find his name. No great figure of history was this friend of mine; just an obscure officer on an obscure ship of the Special Patrol Service.

And yet there is a people who owe to him their very existence.

I wonder if they have forgotten him? It would not surprise me.

The memory of the universe is not a reliable thing.

Anderson Croy was, like most of the officer personnel of the Special Patrol Service, a native of Earth.

They had tried to make a stoop-shouldered dabbler in formulas out of him, but he was not the stuff from which good scientists are moulded. He was young, when I first knew him, and strong; he had mild blue eyes and a quick smile. And he had a fine, steely courage that a man could love.

I was in command, then, of the Ertak, my second ship. I inherited Anderson Croy with the ship, and I liked him from the first time I laid eyes upon him.

As I recall it, we worked together on the Ertak for nearly two years, Earth time. We went through some tight places together. I remember our experience, shortly after I took over the Ertak, on the monstrous planet Callor, whose tiny, gentle people were attacked by strange, vapid Things that come down upon them from the fastness of the polar cap, and—

But I wander from the story I wish to tell here. An old man’s mind is a weak and weary thing that totters and weaves from side to side; like a worn-out ship, it is hard to keep on a straight course.

We were out on one of those long, monotonous patrols, skirting the outer boundaries of the known universe, that were, at that time, before the building of all the many stations we have to-day a dreaded part of the Special Patrol Service routine.

Not once had we landed to stretch our legs. Slowing up to atmospheric speed took time, and we were on a schedule that allowed for no waste of even minutes. We approached the various worlds only close enough to report, and to receive an assurance that all was well. A dog’s life, but part of the game.

My log showed nearly a hundred “All’s well” reports, as I remember it, when we slid up to Antri, which  was, so far as size is concerned, one of our smallest ports o’ call.

Antri, I might add, for the benefit of those who have forgotten their maps of the universe, is a satellite of A-411, which, in turn, is one of the largest bodies of the universe, and both uninhabited and uninhabitable. Antri is somewhat larger than the moon, Earth’s satellite, and considerably farther from its controlling body.

“Report our presence, Mr. Croy,” I ordered wearily. “And please ask Mr. Correy to keep a sharp watch on the attraction meter.” These huge bodies such as A-411 are not pleasant companions at space speeds. A few minute’s trouble—space ships gave trouble, in those days—and you melted like a drop of solder when you struck the atmospheric belt.

“Yes, sir!” There never was a crisper young officer than Croy.

I bent over my tables, working out our position and charting our course for the next period. In a few seconds Croy was back, his blue eyes gleaming.

“Sir, an emergency is reported on Antri. We are to make all possible speed, to Oreo, their governing city. I gather that it is very important.”

“Very well, Mr. Croy.” I can’t say the news was unwelcome. Monotony kills young men. “Have the disintegrator ray generators inspected and tested. Turn out the watch below in such time that we may have all hands on duty when we arrive. If 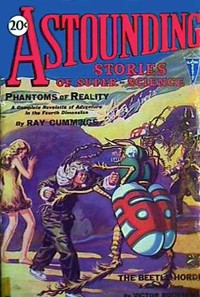