THE CHESSMEN OF MARS by Edgar Rice Burroughs


THE CHESSMEN OF MARS
PRELUDE JOHN CARTER COMES TO EARTH

Shea had just beaten me at chess, as usual, and, also as usual, I had gleaned what questionable satisfaction I might by twitting him with this indication of failing mentality by calling his attention for the nth time to that theory, propounded by certain scientists, which is based upon the assertion that phenomenal chess players are always found to be from the ranks of children under twelve, adults over seventy-two or the mentally defective—a theory that is lightly ignored upon those rare occasions that I win. Shea had gone to bed and I should have followed suit, for we are always in the saddle here before sunrise; but instead I sat there before the chess table in the library, idly blowing smoke at the dishonored head of my defeated king.

While thus profitably employed I heard the east door of the living-room open and someone enter. I thought it was Shea returning to speak with me on some matter of tomorrow's work; but when I raised my eyes to the doorway that connects the two rooms I saw framed there the figure of a bronzed giant, his otherwise naked body trapped with a jewel-encrusted harness from which there hung at one side an ornate short-sword and at the other a pistol of strange pattern. The black hair, the steel-gray eyes, brave and smiling, the noble features—I recognized them at once, and leaping to my feet I advanced with outstretched hand.

"None other, my son," he replied, taking my hand in one of his and placing the other upon my shoulder.

"And what are you doing here?" I asked. "It has been long years since you revisited Earth, and never before in the trappings of Mars. Lord! but it is good to see you—and not a day older in appearance than when you trotted me on your knee in my babyhood. How do you explain it, John Carter, Warlord of Mars, or do you try to explain it?"

"Why attempt to explain the inexplicable?" he replied. "As I have told you before, I am a very old man. I do not know how old I am. I recall no childhood; but recollect only having been always as you see me now and as you saw me first when you were five years old. You, yourself, have aged, though not as much as most men in a corresponding number of years, which may be accounted for by the fact that the same blood runs in our veins; but I have not aged at all. I have discussed the question with a noted Martian scientist, a friend of mine; but his theories are still only theories. However, I am content with the fact—I never age, and I love life and the vigor of youth.

"And now as to your natural question as to what brings me to Earth again and in this, to earthly eyes, strange habiliment. We may thank Kar Komak, the bowman of Lothar. It was he who gave me the idea upon which I have been experimenting until at last I have achieved success. As you know I have long possessed the power to cross the void in spirit, but never before have I been able to impart to inanimate things a similar power. Now, however, you see me for the first time precisely as my Martian fellows see me—you see the very short-sword that has tasted the blood of many a savage foeman; the harness with the devices of Helium and the insignia of my rank; the pistol that was presented to me by Tars Tarkas, Jeddak of Thark.

"Aside from seeing you, which is my principal reason for being here, and satisfying myself that I can transport inanimate things from Mars to Earth, and therefore animate things if I so desire, I have no purpose. Earth is not for me. My every interest is upon Barsoom—my wife, my children, my work; all are there. I will spend a quiet evening with you and then back to the world I love even better than I love life."

As he spoke he dropped into the chair upon the opposite side of the chess table.

"You spoke of children," I said. "Have you more than Carthoris?"

"A daughter," he replied, "only a little younger than Carthoris, and, barring one, the fairest thing that ever breathed the thin air of dying Mars. Only Dejah Thoris, her mother, could be more beautiful than Tara of Helium."

For a moment he fingered the chessmen idly. "We have a game on Mars similar to chess," he said, "very similar. And there is a race there that plays it grimly with men and naked swords. We call the game jetan. It is played on a board like yours, except that there are a hundred squares and we use twenty pieces on each side. I never see it played without thinking of Tara of Helium and what befell her among the chessmen of Barsoom. Would you like to hear her story?"

I said that I would and so he told it to me, and now I shall try to re-tell it for you as nearly in the words of The Warlord of Mars as I can recall them, but in the third person. If there be inconsistencies and errors, let the blame fall not upon John Carter, but rather upon my faulty memory, where it belongs. It is a strange tale and utterly Barsoomian.


CHAPTER I TARA IN A TANTRUM

Tara of Helium rose from the pile of silks and soft furs upon which she had been reclining, stretched her lithe body languidly, and crossed toward the center of the room, where, above a large table, a bronze disc depended from the low ceiling. Her carriage was that of health and physical perfection—the effortless harmony of faultless coordination. A scarf of silken gossamer crossing over one shoulder was wrapped about her body; her black hair was piled high upon her head. With a wooden stick she tapped upon the bronze disc, lightly, and presently the summons was answered by a slave girl, who entered, smiling, to be greeted similarly by her mistress.

"Are my father's guests arriving?" asked the princess.

"Yes, Tara of Helium, they come," replied the slave. "I have seen Kantos Kan, Overlord of the Navy, and Prince Soran of Ptarth, and Djor Kantos, son of Kantos Kan," she shot a roguish glance at her mistress as she mentioned Djor Kantos' name, "and—oh, there were others, many have come."

"The bath, then, Uthia," said her mistress. "And why, Uthia," she added, "do you look thus and smile when you mention the name of Djor Kantos?"

The slave girl laughed gaily. "It is so plain to all that he worships you," she replied.

"It is not plain to me," said Tara of Helium. "He is the friend of my brother, Carthoris, and so he is here much; but not to see me. It is his friendship for Carthoris that brings him thus often to the palace of my father."

"My bath, Uthia!" cried Tara of Helium. "That tongue of yours will bring you to some misadventure yet."

"The bath is ready, Tara of Helium," the girl responded, her eyes still twinkling with merriment, for she well knew that in the heart of her mistress was no anger that could displace the love of the princess for her slave. Preceding the daughter of The Warlord she opened the door of an adjoining room where lay the bath—a gleaming pool of scented water in a marble basin. Golden stanchions supported a chain of gold encircling it and leading down into the water on either side of marble steps. A glass dome let in the sun-light, which flooded the interior, glancing from the polished white of the marble walls and the procession of bathers and fishes, which, in conventional design, were inlaid with gold in a broad band that circled the room.

Tara of Helium removed the scarf from about her and handed it to the slave. Slowly she descended the steps to the water, the temperature of which she tested with a symmetrical foot, undeformed by tight shoes and high heels—a lovely foot, as God intended that feet should be and seldom are. Finding the water to her liking, the girl swam leisurely to and fro about the pool. With the silken ease of the seal she swam, now at the surface, now below, her smooth muscles rolling softly beneath her clear skin—a wordless song of health and happiness and grace. Presently she emerged and gave herself into the hands of the slave girl, who rubbed the body of her mistress with a sweet smelling semi-liquid substance contained in a golden urn, until the glowing skin was covered with a foamy lather, then a quick plunge into the pool, a drying with soft towels, and the bath was over. Typical of the life of the princess was the simple elegance of her bath—no retinue of useless slaves, no pomp, no idle waste of precious moments. In another half hour her hair was dried and built into the strange, but becoming, coiffure of her station; her leathern trappings, encrusted with gold and jewels, had been adjusted to her figure and she was ready to mingle with the guests that had been bidden to the midday function at the palace of The Warlord.

As she left her apartments to make her way to the gardens where the guests were congregating, two warriors, the insignia of the House of the Prince of Helium upon their harness, followed a few paces behind her, grim reminders that the assassin's blade may never be ignored upon Barsoom, where, in a measure, it counterbalances the great natural span of human life, which is estimated at not less than a thousand years.

As they neared the entrance to the garden another woman, similarly guarded, approached them from another quarter of the great palace. As she neared them Tara of Helium turned toward her with a smile and a happy greeting, while her guards knelt with bowed heads in willing and voluntary adoration of the beloved of Helium. Thus always, solely at the command of their own hearts, did the warriors of Helium greet Dejah Thoris, whose deathless beauty had more than once brought them to bloody warfare with other nations of Barsoom. So great was the love of the people of Helium for the mate of John Carter it amounted practically to worship, as though she were indeed the goddess that she looked.

The mother and daughter exchanged the gentle, Barsoomian, "kaor" of greeting and kissed. Then together they entered the gardens where the guests were. A huge warrior drew his short-sword and struck his metal shield with the flat of it, the brazen sound ringing out above the laughter and the speech.

"The Princess comes!" he cried. "Dejah Thoris! The Princess comes! Tara of Helium!" Thus always is royalty announced. The guests arose; the two women inclined their heads; the guards fell back upon either side of the entrance-way; a number of nobles advanced to pay their respects; the laughing and the talking were resumed and Dejah Thoris and her daughter moved simply and naturally among their guests, no suggestion of differing rank apparent in the bearing of any who were there, though there was more than a single Jeddak and many common warriors whose only title lay in brave deeds, or noble patriotism. Thus it is upon Mars where men are judged upon their own merits rather than upon those of their grandsires, even though pride of lineage be 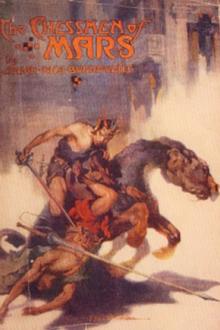 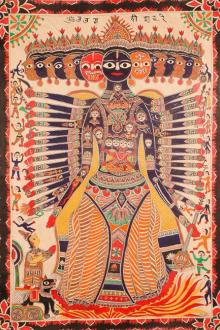 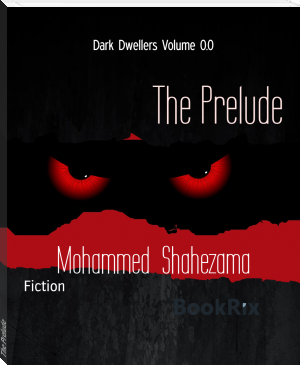