[Pg 1]Conn Maxwell told them: "There are incredible things still undiscovered; most of the important installations were built in duplicate as a precaution against space attack. I know where all of them are.

"But I could find nothing, not one single word, about any giant strategic planning computer called Merlin!"

Nevertheless the leading men of the planet didn't believe him. They couldn't, for the search for Merlin had become their abiding obsession. Merlin meant everything to them: power, pleasures, and profits unlimited.

Conn had known they'd never believe him, and so he had a trick or two up his space-trained sleeve that might outwit even their fabled Cosmic Computer ... if they dared accept his challenge.

[Pg 2] H. BEAM PIPER is rather enigmatic where his personal statistics are concerned. It may be stated that he lives in Williamsport, Pennsylvania, that he is an expert on the history and use of hand weapons, that he has been writing and selling science-fiction for many years to the leading magazines, and that he is highly rated among readers for his skill and imagination. He has had several novels published, including mysteries and juveniles.

His previous appearances in Ace Books include two novels written in collaboration with John J. McGuire: CRISIS IN 2140 (D-227) and A PLANET FOR TEXANS (D-299), and a longer entirely self-authored novel SPACE VIKING (F-225).[Pg 3]

1120 Avenue of the Americas

An Ace Book, by arrangement with G. P. Putnam's Sons

Conn Maxwell, at the armor-glass front of the observation deck, watched the landscape rush out of the horizon and vanish beneath the ship, ten thousand feet down. He thought he knew how an hourglass must feel with the sand slowly draining out.

The words echoed in his mind as though he had spoken them aloud, and then, realizing that he never addressed himself as sir, he turned. It was the first mate.[Pg 6]

He had a clipboard in his hand, and he was wearing a Terran Federation Space Navy uniform of forty years, or about a dozen regulation-changes, ago. Once Conn had taken that sort of thing for granted. Now it was obtruding upon him everywhere.

"Thirty minutes to Litchfield, sir," the first officer repeated, and gave him the clipboard to check the luggage list. Valises, two; trunks, two; microbook case, one. The last item fanned a small flicker of anger, not at any person, not even at himself, but at the whole infernal situation. He nodded.

"That's everything. Not many passengers left aboard, are there?"

"You're the only one, first class, sir. About forty farm laborers on the lower deck." He dismissed them as mere cargo. "Litchfield's the end of the run."

The mate looked again at his name on the list and grinned.

"Sure; you're Rodney Maxwell's son. Your father's been giving us a lot of freight lately. I guess I don't have to tell you about Litchfield."

"Maybe you do. I've been away for six years. Tell me, are they having labor trouble now?"

"Labor trouble?" The mate was surprised. "You mean with the farm-tramps? Ten of them for every job, if you call that trouble."

"Well, I noticed you have steel gratings over the gangway heads to the lower deck, and all your crewmen are armed. Not just pistols, either."

"Well, I guess you'd call them that. A gang'll come aboard, dressed like farm-tramps; they'll have tommy guns and sawed-off shotguns in their bindles. When the ship's airborne and out of reach of help, they'll break out their guns and take her. Usually kill all the crew and passengers. They don't like to leave live witnesses," the mate said. "You heard about the Harriet Barne, didn't you?"

"They didn't pirate her, did they?"

The mate nodded. "Six months ago; Blackie Perales' gang. There was just a tag end of a radio call, that ended in a shot. Time the Air Patrol got to her estimated position it was too late. Nobody's ever seen ship, officers, crew or passengers since."

"Well, great Ghu; isn't the Government doing anything about it?"

"Sure. They offered a big reward for the pirates, dead or alive. And there hasn't been a single case of piracy inside the city limits of Storisende," he added solemnly.

The Calder Range had grown to a sharp blue line on the horizon ahead, and he could see the late afternoon sun on granite peaks. Below, the fields were bare and brown, and the woods were autumn-tinted. They had been green with new foliage when he had last seen them, and the wine-melon fields had been in pink blossom. Must have gotten the crop in early, on this side of the mountains. Maybe they were still harvesting, over in the Gordon Valley. Or maybe this gang below was going to the wine-pressing. Now that he thought of it, he'd seen a lot of cask staves going aboard at Storisende.

Yet there seemed to be less land under cultivation now than six years ago. He could see squares of bracken and low brush that had been melon fields recently, among the new forests that had grown up in the past forty years. The few stands of original timber towered above the second growth like hills; those trees had been there when the planet had been colonized.

That had been two hundred years ago, at the beginning of the Seventh Century, Atomic Era. The name "Poictesme" told that—Surromanticist Movement, when they were rediscovering James Branch Cabell. Old Genji Gartner, the scholarly and half-piratical space-rover whose ship had been the first to enter the Trisystem, had been devoted to the romantic writers of the Pre-Atomic Era. He had named all the planets of the Alpha System from the books of Cabell, and those of Beta from Spenser's Faerie Queene, and those of Gamma from Rabelais. Of course, the camp village at his first landing site on this one had been called Storisende.[Pg 8]

Thirty years later, Genji Gartner had died there, after seeing Storisende grow to a metropolis and Poictesme become a Member Republic in the Terran Federation. The other planets were uninhabitable except in airtight dome cities, but they were rich in minerals. Companies had been formed to exploit them. No food could be produced on any of them except by carniculture and hydroponic farming, and it had been cheaper to produce it naturally on Poictesme. So Poictesme had concentrated on agriculture and had prospered. At least, for about a century.

Other colonial planets were developing their own industries; the manufactured goods the Gartner Trisystem produced could no longer find a profitable market. The mines and factories on Jurgen and Koshchei, on Britomart and Calidore, on Panurge and the moons of Pantagruel closed, and the factory workers went away. On Poictesme, the offices emptied, the farms contracted, forests reclaimed fields, and the wild game came back.

Coming toward the ship out of the east, now, was a vast desert of crumbling concrete—landing fields and parade grounds, empty barracks and toppling sheds, airship docks, stripped gun emplacements and missile-launching sites. These were more recent, and dated from Poictesme's second hectic prosperity, when the Gartner Trisystem had been the advance base for the Third Fleet-Army Force, during the System States War.

It had lasted twelve years. Millions of troops were stationed on or routed through Poictesme. The mines and factories reopened for war production. The Federation spent trillions on trillions of sols, piled up mountains of supplies and equipment, left the face of the world cluttered with installations. Then, without warning, the System States Alliance collapsed, the rebellion ended, and the scourge of peace fell on Poictesme.

The Federation armies departed. They took the clothes they stood in, their personal weapons, and a few souvenirs. Everything else was abandoned. Even the most expensive equipment had been worth less than the cost of removal.

The people who had grown richest out of the War had[Pg 9] followed, taking their riches with them. For the next forty years, those who remained had been living on leavings. On Terra, Conn had told his friends that his father was a prospector, leaving them to interpret that as one who searched, say, for uranium. Rodney Maxwell found quite a bit of uranium, but he got it by taking apart the warheads of missiles.

Now he was looking down on the granite spines of the Calder Range; ahead the misty Gordon Valley sloped and widened to the north. Twenty minutes to Litchfield, now. He still didn't know what he was going to tell the people who would be waiting for him. No; he knew that; he just didn't know how. The ship swept on, ten miles a minute, tearing through thin puffs of cloud. Ten minutes. The Big Bend was glistening redly in the sunlit haze, but Litchfield was still hidden inside its curve. Six. Four. The Countess Dorothy was losing speed and altitude. Now he could see it, first a blur and then distinctly. The Airlines Building, so thick as to look squat for all its height. The yellow block of the distilleries under their plume of steam. High Garden Terrace; the Mall.

Moment by moment, the stigmata of decay became more evident. Terraces empty or littered with rubbish; gardens untended and choked with wild growth; blank-staring windows, walls splotched with lichens. At first, he was horrified at what had happened to Litchfield in six years. Then he realized that the change had been in himself. He was seeing it with new eyes, as it really was.

The ship came in five hundred feet above the Mall, and he could see cracked pavements sprouting grass, statues askew on their pedestals, waterless fountains. At first he thought one of them was playing, but what he had taken for spray was dust blowing from the empty basin. There was a thing about dusty fountains, some poem he'd read at the University.

The fountains are dusty in the Graveyard of Dreams;
The hinges are rusty, they swing with tiny screams.

Was Poictesme a Graveyard of Dreams? No; Junkyard of[Pg 10] Empire. The Terran Federation had impoverished a hundred planets, devastated a score, actually depopulated at least three, to keep the System States Alliance from seceding. It hadn't been a victory. It had only been a lesser defeat.

There was a crowd, almost a mob, on the dock; nearly everybody in topside Litchfield. He spotted old Colonel Zareff, with his white hair and plum-brown skin, and Tom Brangwyn, the town marshal, red-faced and bulking above everybody else. Kurt Fawzi, the mayor, well to the front. Then he saw his father and mother, and his sister Flora, and waved to them. They waved back, and then everybody was waving. The gangway-port opened, and the Academy band struck up, enthusiastically if inexpertly, as he descended to the dock.

His father was wearing a black suit with a long coat, cut to the same pattern as the one he had worn six years ago. Blackout curtain cloth. It was fairly new, but the coat had begun to acquire a permanent wrinkle across the right hip, over the pistol butt. His mother's dress was new, 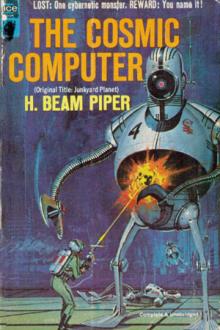 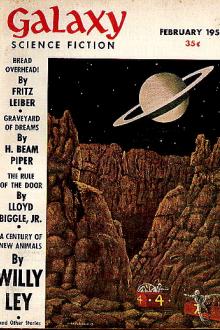