American library books » Fiction » Twenty Thousand Leagues Under the Seas: An Underwater Tour of the World by Verne (books to improve english TXT) 📕

A complete, unabridged translation of Vingt mille lieues sous les mers by Jules Verne, based on the original French texts published in Paris by J. Hetzel et Cie. over the period 1869-71.

The French title of this novel is Vingt mille lieues sous les mers. This is accurately translated as Twenty Thousand Leagues Under the SEAS—rather than the SEA, as with many English editions. Verne’s novel features a tour of the major oceans, and the term Leagues in its title is used as a measure not of depth but distance. Ed.

Portrait by Bertrand, engraved by Guillaumot
Ned Land stayed at his post
“I’ve collected every one of them”
We walked with steady steps
The dugout canoes drew nearer
A dreadful battle was joined
The Bay of Vigo
Picturesque ruins took shape
“Farewell, O sun!” he called
The poor fellow was done for

“The deepest parts of the ocean are totally unknown to us,” admits Professor Aronnax early in this novel. “What goes on in those distant depths? What creatures inhabit, or could inhabit, those regions twelve or fifteen miles beneath the surface of the water? It’s almost beyond conjecture.”

Jules Verne (1828-1905) published the French equivalents of these words in 1869, and little has changed since. 126 years later, a Time cover story on deep-sea exploration made much the same admission: “We know more about Mars than we know about the oceans.” This reality begins to explain the dark power and otherworldly fascination of Twenty Thousand Leagues Under the Seas.

Born in the French river town of Nantes, Verne had a lifelong passion for the sea. First as a Paris stockbroker, later as a celebrated author and yachtsman, he went on frequent voyages—to Britain, America, the Mediterranean. But the specific stimulus for this novel was an 1865 fan letter from a fellow writer, Madame George Sand. She praised Verne’s two early novels Five Weeks in a Balloon (1863) and Journey to the Center of the Earth (1864), then added: “Soon I hope you’ll take us into the ocean depths, your characters traveling in diving equipment perfected by your science and your imagination.” Thus inspired, Verne created one of literature’s great rebels, a freedom fighter who plunged beneath the waves to wage a unique form of guerilla warfare.

Initially, Verne’s narrative was influenced by the 1863 uprising of Poland against Tsarist Russia. The Poles were quashed with a violence that appalled not only Verne but all Europe. As originally conceived, Verne’s Captain Nemo was a Polish nobleman whose entire family had been slaughtered by Russian troops. Nemo builds a fabulous futuristic submarine, the Nautilus, then conducts an underwater campaign of vengeance against his imperialist oppressor.

Verne is often dubbed, in Isaac Asimov’s phrase, “the world’s first science-fiction writer.” And it’s true, many of his sixty-odd books do anticipate future events and technologies: From the Earth to the Moon (1865) and Hector Servadac (1877) deal in space travel, while Journey to the Center of the Earth features travel to the earth’s core. But with Verne the operative word is “travel,” and some of his best-known titles don’t really qualify as sci-fi: Around the World in Eighty Days (1872) and Michael Strogoff (1876) are closer to “travelogs”—adventure yarns in far-away places.

These observations partly apply here. The subtitle of the present book is An Underwater Tour of the World, so in good travelog style, the Nautilus’s exploits supply an episodic story line. Shark attacks, giant squid, cannibals, hurricanes, whale hunts, and other rip-roaring adventures erupt almost at random. Yet this loose structure gives the novel an air of documentary realism. What’s more, Verne adds backbone to the action by developing three recurring motifs: the deepening mystery of Nemo’s past life and future intentions, the mounting tension between Nemo and hot-tempered harpooner Ned Land, and Ned’s ongoing schemes to escape from the Nautilus. These unifying threads tighten the narrative and accelerate its momentum.

Other subtleties occur inside each episode, the textures sparkling with wit, information, and insight. Verne regards the sea from many angles: in the domain of marine biology, he gives us thumbnail sketches of fish, seashells, coral, sometimes in great catalogs that swirl past like musical cascades; in the realm of geology, he studies volcanoes literally inside and out; in the world of commerce, he celebrates the high-energy entrepreneurs who lay the Atlantic Cable or dig the Suez Canal. And Verne’s marine engineering proves especially authoritative. His specifications for an open-sea submarine and a self-contained diving suit were decades before their time, yet modern technology bears them out triumphantly.

True, today’s scientists know a few things he didn’t: the South Pole isn’t at the water’s edge but far inland; sharks don’t flip over before attacking; giant squid sport ten tentacles not eight; sperm whales don’t prey on their whalebone cousins. This notwithstanding, Verne furnishes the most evocative portrayal of the ocean depths before the arrival of Jacques Cousteau and technicolor film.

Lastly the book has stature as a novel of character. Even the supporting cast is shrewdly drawn: Professor Aronnax, the career scientist caught in an ethical conflict; Conseil, the compulsive classifier who supplies humorous tag lines for Verne’s fast facts; the harpooner Ned Land, a creature of constant appetites, man as heroic animal.

But much of the novel’s brooding power comes from Captain Nemo. Inventor, musician, Renaissance genius, he’s a trail-blazing creation, the prototype not only for countless renegade scientists in popular fiction, but even for such varied figures as Sherlock Holmes or Wolf Larsen. However, Verne gives his hero’s brilliance and benevolence a dark underside—the man’s obsessive hate for his old enemy. This compulsion leads Nemo into ugly contradictions: he’s a fighter for freedom, yet all who board his ship are imprisoned there for good; he works to save lives, both human and animal, yet he himself creates a holocaust; he detests imperialism, yet he lays personal claim to the South Pole. And in this last action he falls into the classic sin of Pride. He’s swiftly punished. The Nautilus nearly perishes in the Antarctic and Nemo sinks into a growing depression.

Like Shakespeare’s King Lear he courts death and madness in a great storm, then commits mass murder, collapses in catatonic paralysis, and suicidally runs his ship into the ocean’s most dangerous whirlpool. Hate swallows him whole.

For many, then, this book has been a source of fascination, surely one of the most influential novels ever written, an inspiration for such scientists and discoverers as engineer Simon Lake, oceanographer William Beebe, polar traveler Sir Ernest Shackleton. Likewise Dr. Robert D. Ballard, finder of the sunken Titanic, confesses that this was his favorite book as a teenager, and Cousteau himself, most renowned of marine explorers, called it his shipboard bible.

The present translation is a faithful yet communicative rendering of the original French texts published in Paris by J. Hetzel et Cie.—the hardcover first edition issued in the autumn of 1871, collated with the softcover editions of the First and Second Parts issued separately in the autumn of 1869 and the summer of 1870. Although prior English versions have often been heavily abridged, this new translation is complete to the smallest substantive detail.

Because, as that Time cover story suggests, we still haven’t caught up with Verne. Even in our era of satellite dishes and video games, the seas keep their secrets. We’ve seen progress in sonar, torpedoes, and other belligerent machinery, but sailors and scientists—to say nothing of tourists—have yet to voyage in a submarine with the luxury and efficiency of the Nautilus.

THE YEAR 1866 was marked by a bizarre development, an unexplained and downright inexplicable phenomenon that surely no one has forgotten. Without getting into those rumors that upset civilians in the seaports and deranged the public mind even far inland, it must be said that professional seamen were especially alarmed. Traders, shipowners, captains of vessels, skippers, and master mariners from Europe and America, naval officers from every country, and at their heels the various national governments on these two continents, were all extremely disturbed by the business.

In essence, over a period of time several ships had encountered “an enormous thing” at sea, a long spindle-shaped object, sometimes giving off a phosphorescent glow, infinitely bigger and faster than any whale.

The relevant data on this apparition, as recorded in various logbooks, agreed pretty closely as to the structure of the object or creature in question, its unprecedented speed of movement, its startling locomotive power, and the unique vitality with which it seemed to be gifted. If it was a cetacean, it exceeded in bulk any whale previously classified by science. No naturalist, neither Cuvier nor Lacépède, neither Professor 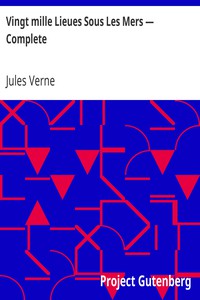 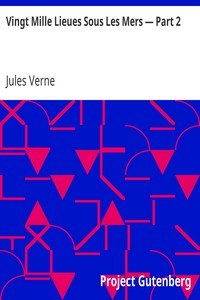 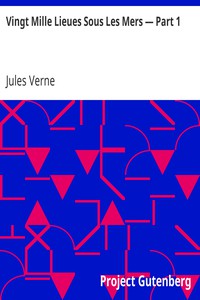 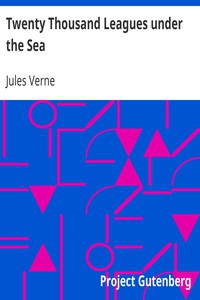