This book is a work of fiction. All of the characters, organizations, and events portrayed in this novel are either products of the author’s imagination or are used fictitiously. Sometimes both.

The distribution of this book without permission is a theft of the author’s intellectual property. If you would like permission to use material from the book (other than for review purposes), please contact [email protected] Thank you for your support of the author’s rights.

Thanks to our Beta Team:

Thanks to our JIT Team:

If I’ve missed anyone, please let me know!

“Are we there yet?” Jazai asked as he, Devol, and Asla continued to walk down the winding road. The massive field of golden grass around them was the only thing they could see.

“Why are you the most childish one of the three of us?” the wildkin questioned in return as she pointed farther down the road. “There—in the distance. Do you see the forest?”

Jazai squinted, his expression somewhat offended. He formed a circle with one hand and peered through it as a soft glow of blue mana covered his hand. “Damn, how good are your eyes?”

“Are you using a cantrip?” Devol asked and looked over his shoulder at the diviner.

“Yeah.” He nodded and moved his hand away from his face. “How is that surprising?”

“I didn’t hear you use an incantation. I thought you had to say the cantrip’s designation to get it to work.”

“For the more powerful ones or those you aren’t familiar with,” he explained and waggled his fingers in a parody of doing magic. “Anything you’ve done over and over, or simple things like using mana to light a wick, eventually simply become instinctive.”

The swordsman nodded and considered his use of magic. “Hmm, I guess I have done that, but I thought of it as a trick, not a cantrip.”

“I’m able to do a few without the incantations,” Jazai stated and peered at the forest again. “Most are simple things like this spell—farsight. The one I use the most is blink, obviously.”

“Both of those are transmutation spells, correct?” Devol asked and the scholar nodded in confirmation. He looked down the road at the forest far in the distance before he turned his head slowly to look at the other boy. “Have you had to look at things up close often?”

Jazai frowned and lowered his hand as he turned to address his teammate. “You’ve met Zier.” He shrugged as if that fact alone provided sufficient explanation. “Well, let me tell you, that posh dryad often has me read passages repeatedly and he likes to talk for hours about something that can be summarized in two or three sentences.” His teammates nodded in sympathy. “Is it a surprise that he would have me study things…” He jerked his head forward so he was only a couple inches away from Devol’s, whose eyes widened instinctively. “Very, idiotically, close?”

The young swordsman moved back a little and nodded slowly. “Oh. Well, when you put it like that, I guess I understand.”

“Your relationship with your mentor is rather concerning,” Asla commented as she continued to walk ahead of them. “The fact that you seem to get so agitated over such trivial things is not healthy.”

Jazai sighed, snapped his fingers, and blinked beside her. Devol had to lengthen his stride to catch up. “If it were only a few trivial things, I would let it slide. But it. Is. Every. Day. Asla!”

The wildkin frowned and she lowered her ear to shield against the irate magi’s words. “I worry that you will lose patience and attack Zier one day.”

The boy scoffed and folded his arms, his gaze fixed on where he’d seen the forest ahead. “No, I wouldn’t do something like that.” He grimaced and stared at the sky as if looking for answers. “I’m very sure that would mean he wins…something.”

Devol jogged past them, turned to face them, and walked backward. “You know, I don’t think we’ve come up with a plan for the mission. We should probably go over that before we get too close.”

“We only have to deal with some flayers, right?” Asla asked. “It should not be an issue.”

“I’ve seen a flayer in action,” he told her. “About three months ago, when I was on my way to the order, I walked through a forest when I met Mr. Lebatt. He took care of it in a single strike.”

“You can probably call him Vaust now,” Jazai suggested. “We might be younger but even Zier and Wulfsun are younger than him by about a century, at least.”

“We are supposed to be comrades in arms,” Asla agreed as she held her gloves out and examined them.

“I guess so, but I think he likes it so it is not a big deal.” Devol turned again to fall into step beside them.

Jazai shook his head and leaned closer to Asla. “Is he naïve or merely good-natured?”

“I think it is kindness,” she answered with a slight smirk as she fixed him with a teasing look. “Is that a foreign concept to you?”

He rolled his eyes and leaned away as the swordsman

The Three Musketeers by Alexandre Dumas (to read list txt) 📕 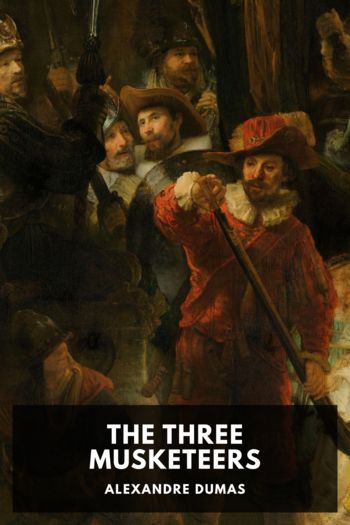