DEATH OF THE AYN RAND SCHOLAR

All rights reserved. No part of this book may be reprinted, distributed, or reproduced or utilized in any form or by any electronic or other means, including photocopying and recording, or in any information-storage or retrieval system without permission in writing from the author.

Thanks to Nancy Jurik and Francine Banner for their comments and support in the development and writing of this book.

DEATH OF THE AYN RAND SCHOLAR

Even though she was heading to what probably was a murder scene, Jillian smiled. First, because she was heading to a murder investigation…her first major crime in the new job and a most unlikely assignment for a campus cop, even one who’s a newly minted Detective Sergeant. And second, she smiled because she was driving a golf cart across campus, a scene she’d seen maybe a zillion times when she was an ASU student, but then she’d always seen someone else riding in those carts—students with broken legs fumbling with their crutches or deans or other university muckety-mucks, always with a student driver—and this time she was the one driving. “Funny,” she thought, “driving a golf cart as career validation.”

It was the second week of September so it was still hot on the Tempe campus—105 and muggy—and early enough in the fall semester that most of the students were still going to their classes. So, it was crowded as she drove on the wide sidewalk between the yellowish-orange brick Business Administration Building on her right and the grayish Discovery Hall, the one with the names of the dead scientists etched above the windows, on the left. When she was a student, Discovery Hall had been the Ag Building and was an interesting terracotta color. She’d once had a class in Ag: Justice Theory. The new color looked a little institutional, she thought, but at least ASU left the names of the dead scientists.

She had to drive the cart carefully, weaving through throngs of students, most walking, some on bikes or skateboards, others on motorized scooters, all of them texting, a FedEx van, and other carts. Also, there were cones and barriers along the right of the walkway, marking campus-wide construction that had been underway for weeks. She wished she had a magnetized blue light she could slap on the top of her cart.

But, once she reached the center of things at the Memorial Union, she hit the “Walk-only” zone and at least the bikes and skate boards and scooters were gone. She hung a right just past the MU—the area was crowded with students heading in for lunch or leaving with Red Bulls or cups of ‘to-go’ coffee—but soon the mall area opened up onto an actual road without much traffic so she made better time. Just before the Law School, Jillian took a right and snaked along a sidewalk. Actually, she meant the former law school. ASU’s Sandra Day O’Connor School of Law had moved to the downtown Phoenix campus and their old building was being renovated. That work really jammed-up the area with more construction barricades. The sidewalk was crowded with students who were heading toward her, walking or on bikes. ASU had erected opaque cloth fencing along the length of the building to protect passers-by or maybe keep people out of the construction site, but the fencing just made the sidewalk seem more crowded.

Behind the old law school building was the former Law Library, which now housed the English Department…her destination. Despite the student traffic, the construction, and all of that, she still made it door to door—ASU Police Headquarters to Ross-Blakey Hall—in under seven minutes. She was fast enough that she arrived seconds before an unmarked Tempe PD car. It rolled to a stop, siren wailing, blue light flashing in its grill.

The 911 calls had come in at almost the same time: 11:05 to Tempe PD (from the Assistant Director of the English Department), and to ASU PD at 11:08 (from an English professor). She dismounted the golf cart and waited a couple of seconds as Wes, her former partner, and his driver, a uniformed officer who Jillian didn’t recognize, left the police car. They entered the building together.

“Morning Jilly.” “Morning Wes.” This was a serious business so there was no time for hugs, but they smiled at each other. Then, “Jilly, this is Officer Peter Voss; Peter, Detective Sergeant, Jillian Warne.” As they exchanged their greetings, Jillian noted the English Department Office straight ahead at the end of the atrium, but glanced at her print-out, looked up and saw the staircase through a double glass door to the right, pointed and said, “It’s the second floor. Stairs OK?”

They took the stairs two at the time. As they emerged from the stairwell, Jillian looked at the print-out again, glanced at the office directory on the wall, and said, “It’s this way,” pointing straight ahead.

Even as she pointed, it was obvious where they were headed. At the far end of the long, wide corridor, a group of people milled about: some obvious professors, some people she assumed were staff, a couple of students…all clearly in shock, and all nervously watching the approach of the three—Jillian, Wes, and Officer Voss—people who hopefully could make some sense of the inexplicable.

Jillian and Wes were in plain clothes and Officer Voss was in his uniform, but all three displayed their IDs. Even as they did so, the crowd parted, naturally, deferring to the three cops. Because this was her turf—or at least it used to be and now was so again—Jillian, still in the lead, turned left at the end of the corridor and walked to an office at the right rear of the hallway. “It’s this one,” she said and pointed. The nameplate in the slot to the side of the door said Dr. Nelda Siemens. The front wall of the office as you faced it from the corridor was of a translucent glass.

If ASU was Jillian’s

The Murder on the Links by Agatha Christie (classic book list .txt) 📕 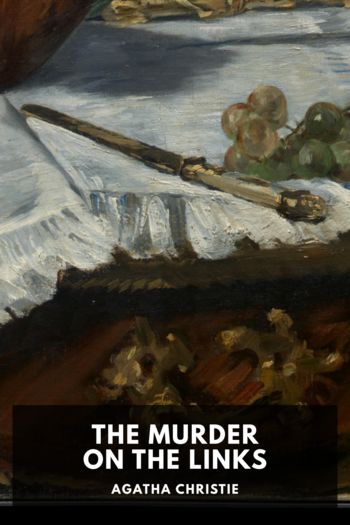