OTHER BOOKS BY BETH POWNING

Shadow Child: An Apprenticeship in Love and Loss

A Measure of Light

PUBLISHED BY ALFRED A. KNOPF CANADA

All rights reserved under International and Pan-American Copyright Conventions. No part of this book may be reproduced in any form or by any electronic or mechanical means, including information storage and retrieval systems, without permission in writing from the publisher, except by a reviewer, who may quote brief passages in a review. Published in 2021 by Alfred A. Knopf Canada, a division of Penguin Random House Canada Limited, Toronto. Distributed in Canada by Penguin Random House Canada Limited, Toronto.

“…each had…some remote and distant hope which, though perhaps starving to nothing, still lived on, as hopes will.”

Tess of the d’Urbervilles

9. Someone Who Talks Back

IN JOSEPHINE’S PARLOUR, Mr. Fairweather sat close to the Franklin stove, hands held open to its heat. His eyes were like a dog’s, trusting and earnest, and Josephine wondered at his distress. She enjoyed the rare occasions when they were alone together, remembering how, when they were schoolchildren, he had once slipped her a misspelled note, folded to the size of a pansy.

Dear Josephine, will you mary me?

“I apologize for this intrusion, Mrs. Galloway,” he said. “It is because of the urgency of the matter, a young girl.”

He sat back from the fire, turned to her.

“But first, tell me what you hear from your husband.”

“I have only my last letter from him when he was provisioning the ship in New York. Now, of course, he is at sea so I won’t hear from him for some time.”

She closed her eyes, briefly, rejecting even the possibility of sympathy. Her fingers stroked the nap of her cuffs, like petting a cat.

“It is the way for a sea captain’s wife.” Her voice was steady, held riches. “I am accustomed to it. But please, tell me. What young girl?”

“As you know, my duties are…extensive. We have no almshouse in Pleasant Valley.”

A year ago, when Harland Fairweather was appointed Overseer of the Poor by the Justices of the Peace, his wife, Permelia, had whispered the news to Josephine as they were leaving church. He does not want to do it. She smelled of the new wintergreen tooth cleaner from McClean’s Drug Store. He will have to pay a substantial fine if he refuses. I told him he must take the position.

Harland and Permelia lived with four daughters in a mansard- roofed brick house next to Fairweather’s Gentlemen’s Clothing at the lower end of Josephine’s street, where Creek Road met Main Street. Josephine often witnessed Harland in the office at the back of his store, stern and remote, like a display behind glass. All the men in her own family were business owners. Her husband’s father owned the town’s largest dry goods store; her own father, now in partnership with his two sons, owned a boot and shoe factory.

“I have seen the discussions about the almshouse in the paper,” Josephine said. “I concur with the opinion that the poor should have such a place, well-staffed and provisioned by the province.”

He paused, surprised, and she surmised that Permelia did not read the brand-new Weekly Record. Or perhaps, careful with her grammar, her manners, the people with whom she associated, she perused only the social notes. Growing up, Permelia had been, if not poor, at least disadvantaged; her widowed mother had worked at the steam laundry.

“There is much discussion, indeed,” he agreed. Relief, she saw, that he could discuss this with her; and a hint of yearning, quickly hidden by a return of his eyes, and hands, to the stove’s heat. “Based upon the exigencies of taxation rather than compassion.”

She brushed her hands down her skirts, looking at the tips of her shoes. His care for her held no threat or urgency, only made her feel the poignancy of such a friendship.

At the end of the room was an outflung octagonal turret, where the Christmas tree stood, filling the parlour with the aromas of moss and sap. Last night, Josephine and her daughters had decorated the tree with popcorn chains, gilded walnut shells, and stars made of paper-lace.

“I have read about the auction, Mr. Fairweather. Once a year, paupers are offered for sale.” The bidding went downward, rather than up. The lowest bidder won the pauper. “It saves the province money.”

“Precisely. There is a girl up for auction. I have visited her. Her name is Flora Salford.”

He folded his hands in his lap and watched the fire. She saw his lips tighten, pained.

“Evidently she was brought from England

Jude the Obscure by Thomas Hardy (snow like ashes .txt) 📕 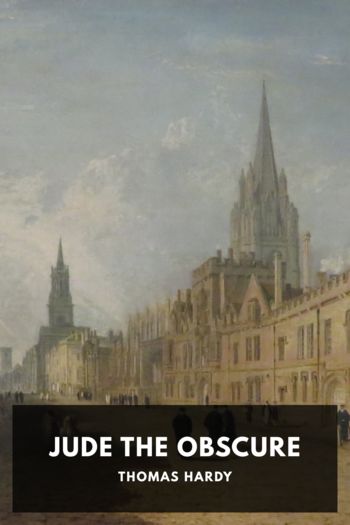