Transcriber's Note: This e-text was produced from Astounding Stories, March, 1932. Extensive research did not uncover any evidence that the U.S. copyright on this publication was renewed.

Off to the Rendezvous

Hawk Carse himself goes to keep Judd the Kite's rendezvous with the sinister genius Ku Sui.

Though it is seldom nowadays that Earthmen hear mention of Hawk Carse, there are still places in the universe where his name retains all its old magic. These are the lonely outposts of the farthest planets, and here when the outlanders gather to yarn the idle hours away their tales conjure up from the past that raw, lusty period before the patrol-ships came, and the slender adventurer, gray-eyed and with queer bangs of hair obscuring his forehead, whose steely will, phenomenal ray-gun draw and reckless space-ship maneuverings combined to make him the period's most colorful figure. These qualities of his live again in the outlanders' reminiscences and also of course his score of blood-feuds and the one great feud that shook whole worlds in its final terrible settling—the feud of Hawk Carse and Dr. Ku Sui.

Again and again the paths of the adventurer and the sinister, brilliant Eurasian crossed, and each crossing makes a rich tale. Time after time Ku Sui, through his several bands of space-pirates, his individual agents and his ambitious web of power insidiously weaving over the universe, whipped his tentacles after the Hawk, and always the tentacles coiled back, repulsed and bloody. An almost typical episode is in the affair which followed what has been called the Exploit of the Hawk and the Kite.

It will be remembered—as related in "Hawk Carse"1—that Dr. Ku laid a most ingenious trap for Carse on the latter's ranch on Iapetus, eighth satellite of Saturn. Judd the Kite, pirate and scavenger, was the Eurasian's tool in this plot, which started with a raid on the ranch. The fracas which followed the Hawk's escape from the trap was bloody and grim enough, and resulted in the erasure of Judd and all his men save one; but the important thing to the following affair was that Judd's ship, the Scorpion, fell into Carse's hands with one prisoner and the ship's log, containing the space coordinates for a prearranged assignation of Judd with Ku Sui.

All other projects were postponed by the Hawk at this opportunity to meet Dr. Ku face to face. The trail of the Eurasian was the guiding trail of his life, and swiftly he moved along it.

There was work to be done before he could set out. Three men had emerged alive from the clash between the Hawk and the Kite: Carse himself, Friday, his gigantic negro companion in adventure, and a bearded half-caste called Sako, sole survivor of Judd's crew. Aided sullenly by this man, they first cleaned up the ravaged ranch, burying the bodies of the dead, repairing fences and generally bringing order out of confusion. Then, under Carse's instructions, Friday and the captive brigand tooled the adventurer's own ship, the Star Devil, well into the near-by jungle, while the Hawk returned to the Scorpion.

He went into her control cabin, opened her log book and once more scanned what interested him there. The notation ran:

He mulled over it, slowly stroking his flaxen bangs. It was a chance, and a good one. Judd's ship would keep that rendezvous, but it would sheathe the talons of the Hawk. This time a trap would be laid for Ku Sui.

The plan was simple enough, on the face of it, but the Eurasian was a master of cunning as well as a master of science, and high peril attended any matching of wits with him. Carse closed the log, his face bleak, his mind made up. A shuffle of feet brought his gaze up to the port-lock entrance.

Friday, stripped to shorts, a sweat-glistening ebony giant, stood there. Shaking the drops of steaming perspiration from his face, he reported:

"All finished, suh—got the Star Devil in the jungle where you said to hide her. An' now what? You still figurin' on keepin' that date with Dr. Ku in this ship?"

"I'm not taking any crew, Eclipse."

Friday gaped in surprise at his master, then found words:

"I've lost enough men in the last two days," Carse cut in shortly. "And this meeting with Dr. Ku is a highly personal affair. You and I and Sako can run the ship; we've got to." One of the man's rare smiles relaxed his face. "Of course," he murmured, "I'm risking your life, Eclipse. Perhaps I'd better leave you somewhere?"

The Hawk's smile broadened at the spontaneous exclamation of loyalty.

"Very well, then," he said. "Now send Sako to me, and prepare ship for casting off."

But as Friday went aft on a final thorough inspection of all mechanisms, he muttered over and over, "Two of us—against Ku Sui! Two of us!" and he was still very much disturbed when, after Carse had had a few crisp words with the captive Sako, telling him that he would be free but watched and that it would be wise if he confined himself to his duties, the order came through to the engine room:

Gently the brigand ship Scorpion stirred. Then, in response to the delicate incline of her space-stick, she lifted sweetly from the crust of Iapetus and at ever-increasing speed burned through the satellite's atmosphere toward the limitless dark leagues beyond.

The Hawk was on the trail!

Carse took the first watch himself. Except for occasional glances at the banks of instruments, the screens and celestial charts, he spent his time in deep thought, turning over in his mind the several variations of situation his dangerous rendezvous might take.

First, how would Ku Sui contact the Scorpion? Any of three ways, he reasoned: come aboard from his own craft accompanied by some of his men; stay behind and send some men over to receive the remains of the Hawk—for either of which variations he was prepared; or, a third, and more dangerous, direct that the remains of Carse be brought over to his ship, without showing himself or any of his crew.

There was peril on every side. The Hawk considered that it would be wise to make provision against the odds proving too great. So, his gray eyes reflective, he strode to the Scorpion's radio panel and a moment later was saying over and over in a toneless voice:

He broke off as words in English came softly from the loudspeaker:

"Yes. Give me protected connection. Highly important no outsider overhears."

The Hawk relaxed and his face softened. "How are you, Eliot?" he asked almost tenderly.

"I'm concerned with Ku Sui again," the Hawk told him swiftly. "Please excuse me; I have to be brief. I can't take any chances of his hearing any of this." He related the events of the last two days: Judd's attack on the Iapetus ranch, the subsequent fight and outcome, and finally his present position and intention of keeping the rendezvous. "The odds are pretty heavily against me, M. S.," he went on. "It would be stupid not to admit that I may not come out of this affair alive—and that's why I'm calling. My affairs, of course, are in your hands. You know where my storerooms and papers are. Sell my trading posts and ranches; Hartz of Newark-on-Venus is the best man to deal through. But I'd advise you to keep for yourself that information on the Pool of Radium. Look into it sometime. I'm in Judd's ship, the Scorpion; our Star Devil's on Iapetus, hidden in the jungle near the ranch. That's all, I think."

"Carse, I should be with you!"

"No, M. S.—couldn't risk it. You're too valuable a man. But don't worry, you know my luck. I'll very likely be down to see you after this meeting, and perhaps with a visitor who will enable you once again to return to an honorable position on Earth. Where will you be?"

He paused, his hand on the switch. There came a parting wish:

The Master Scientist's voice trembled at the end. Through Ku Sui he had lost honor, position, home—all good things a man on Earth may have; through Ku Sui he, the gentlest of men, was regarded by Earthlings as a black murderer and there was a price on his head. Hawk Carse did not miss the trembling in his voice. As he switched off, the adventurer's eyes went bleak as the loneliest deeps of space....

The Coming of Ku Sui

Straight through the vast cold reaches that stretched between one mighty planet and another the Scorpion arrowed, Carse and Friday standing watch and watch, Sako always on duty with the latter. Behind, Saturn's rings melted smaller, and ahead a dusky speck grew against the vault of space until the red belts and one great seething crimson spot that marked it as Jupiter stood out plainly. By degrees, then, the ship's course was altered as Carse checked his calculations and made minor corrections in speed and direction. So they neared the rendezvous. And a puzzled furrow grew on Friday's brow.

What was bothering his master? Instead of becoming more impassive and coldly emotionless as the distance shortened, he showed distinct signs of worry. This might be natural in most men, but it was unusual in the Hawk. Often the negro found him abstractedly smoothing his bangs of hair, pacing the length of the control cabin, glancing, plainly worried, at the visi-screen. What special thing was wrong? Friday wondered again and again—and then, in a flash, he knew.

The Hawk nodded. "That's just the problem, Eclipse. For you'll remember Judd said that Ku Sui 'comes out of

Free e-book: «The Affair of the Brains by Anthony Gilmore (most important books of all time TXT) 📕»   -   read online now on website american library books (americanlibrarybooks.com) 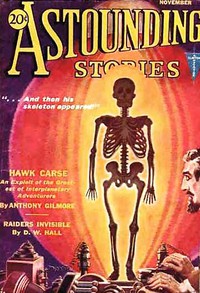