“And that,” said Colonel Fennister glumly, “appears to be that.”

The pile of glowing coals that had been Storage Shed Number One was still sending up tongues of flame, but they were nothing compared with what they’d been half an hour before.

The colonel turned his head and glowered at his adjutant.

“There are times, Grodski, when your sense of humor is out of place.”

“Yes, sir,” said the major, still sniffing. “Funny thing for lightning to do, though. Sort of a dirty trick, you might say.”

“You might,” growled the colonel. He was a short, rather roundish man, who was forever thankful that the Twentieth Century predictions of skin-tight uniforms for the Space Service had never come true. He had round, pleasant, blue eyes, a rather largish nose, and a rumbling basso voice that was a little surprising the first time you heard it, but which seemed to fit perfectly after you knew him better.

Right at the moment, he was filing data and recommendations in his memory, where they would be instantly available for use when he needed them. Not in a physical file, but in his own mind.

All right, Colonel Fennister, he thought to himself, just what does this mean—to me? And to the rest?

The Space Service was not old. Unlike the Air Service, the Land Service, or the Sea Service, it did not have centuries or tradition behind it. But it had something else. It had something that none of the other Services had—Potential.

In his own mind, Colonel Fennister spelled the word with an upper [61] case P, and put the word in italics. It was, to him, a more potent word than any other in the Universe.

Colonel Fennister was not a proud man. He was not an arrogant man. But he did have a sense of destiny; he did have a feeling that the human race was going somewhere, and he did not intend that that feeling should become totally lost to humanity.

Definition: Potential; that which has a possibility of coming into existence.

No, more than that. That which has a—

He jerked his mind away suddenly from the thoughts which had crowded into his forebrain.

And (Fennister grinned grimly to himself) what good did it do to calculate chances after the event had happened?

Surrounding the compound had been a double-ply, heavy-gauge, woven fence. It was guaranteed to be able to stop a diplodocus in full charge; the electric potential (potential! That word again!) great enough to carbonize anything smaller than a blue whale. No animal on Alphegar IV could possibly get through it.

Trouble was, no one had thought of being attacked by something immensely greater than a blue whale, especially since there was no animal larger than a small rhino on the whole planet. Who, after all, could have expected an attack by a blind, uncaring colossus—a monster that had already been dying before it made its attack?

Because no one had thought of the forest.

The fact that the atmospheric potential—the voltage and even the amperage difference between the low-hanging clouds and the ground below—was immensely greater than that of Earth, that had already been determined. But the compound and the defenses surrounding it had already been compensated for that factor.

That it would have been burning—that was something that could have been guaranteed, had the idea of the original toppling been considered. Especially after the gigantic wooden life-thing had smashed across the double-ply fence, thereby adding [63] man-made energy to its already powerful bulk and blazing surface.

But—that it would have fallen across Storage Shed Number One? Was that predictable?

Fennister shook his head slowly. No. It wasn’t. The accident was simply that—an accident. No one was to blame; no one was responsible.

Except Fennister. He was responsible. Not for the accident, but for the personnel of the expedition. He was the Military Officer; he was the Man In Charge of Fending Off Attack.

And he had failed.

Because that huge, blazing, stricken tree had toppled majestically down from the sky, crashing through its smaller brethren, to come to rest on Storage Shed Number One, thereby totally destroying the majority of the food supply.

There were eighty-five men on Alphegar IV, and they would have to wait another six months before the relief ship came.

And they didn’t have food enough to make it, now that their reserve had been destroyed.

Fennister growled something under his breath.

“What?” asked Major Grodski, rather surprised at his superior’s tone.

Major Grodski looked around him at the lush forest which surrounded the double-ply fence of the compound.

“Yeah,” he said. “‘Nor any drop to drink.’ But I wish one of those boards had shrunk—say, maybe, a couple hundred feet.”

“I’m going back to my quarters,” Fennister said. “I’ll be checking with the civilian personnel. Let me know the total damage, will you?”

“I won’t,” said Colonel Fennister, as he turned.

The colonel let his plump bulk sag forward in his chair, and he covered his hands with his eyes. “I can imagine all kinds of catastrophes,” he said, with a kind of hysterical glumness, “but this has them all beat.”

Dr. Pilar stroked his, short, gray, carefully cultivated beard. “I’m afraid I don’t understand. We could all have been killed.”

The colonel peeked one out from between the first and second fingers of his right hand. “You think starving to death is cleaner than fire?”

Pilar shook his head slowly. “Of course not. I’m just not certain that we’ll all die—that’s all.”

Colonel Fennister dropped his hands to the surface of his metal desk. “I see,” he said dryly. “Where there’s life, there’s hope. Right? All right, I agree with you.” He waved his hand around, in an all-encompassing gesture. “Somewhere out there, we may find food. But don’t you see that this puts us in the Siege Position?”

Fennister gestured with one hand and leaned back in his chair, looking at the scientist across from him. “I’m sorry,” he said. “I’ve let my humiliation get the better of me.” He clipped his upper lip between his teeth until his lower incisors were brushed by his crisp, military mustache, and held it there for a moment before he spoke.

“The Siege Position is one that no military commander of any cerebral magnitude whatever allows himself to get into. It is as old as Mankind, and a great deal stupider. It is the position of a beleaguered group which lacks one simple essential to keep them alive until help comes.

“A fighting outfit, suppose, has enough ammunition to stand off two more attacks; but they know that there will be reinforcements within four days. Unfortunately, the enemy can attack more than twice before help comes. Help will come too late.

“Or, it could be that they have enough water to last a week, but help won’t come for a month.

“You follow me, I’m sure. The point, in so far as it concerns us, is that we have food for about a month, but we won’t get help before six months have passed. We know help is coming, but we won’t be alive to see it.”

Then his eyes lit up in a kind of half hope. “Unless the native flora—”

But even before he finished, he could see the look in Dr. Pilar’s eyes.

Broderick MacNeil was a sick man. The medical officers of the Space Service did not agree with him in toto, but MacNeil was in a position to know more about his own state of health than the doctors, because it was, after all, he himself who was sick.

Rarely, of course, did he draw the attention of the medical officers to his ever-fluctuating assortment of aches, pains, signs, symptoms, malaises, and malfunctions. After all, it wouldn’t do for him to be released from the Service on a Medical Discharge. No, he would suffer in silence for the sake of his chosen career—which, apparently, was to be a permanent Spaceman 2nd Class.

Broderick MacNeil had never seen his medical record, and therefore did not know that, aside from mention of the normal slight defects which every human body possesses, the only note on the records was one which said: “Slight tendency toward hypochondria, compensated for by tendency to immerse self in job at hand. According to psych tests, he can competently handle positions up to Enlisted Space Officer 3rd Class, but positions of ESO/2 and above should be carefully considered. (See Psych Rept. Intelligence Sectn.)”

But, if MacNeil did not know what the medics thought of him, neither did the medics know what he thought of them. Nor did they know that MacNeil carried a secret supply of his own personal palliatives, purgatives and poly-purpose pills. He kept them carefully concealed[65] in a small section of his space locker, and had labeled them all as various vitamin mixtures, which made them seem perfectly legal, and which was not too dishonest, since many of them were vitamins.

On the morning after the fire, he heaved his well-muscled bulk out of bed and scratched his scalp through the close-cropped brown hair that covered his squarish skull. He did not feel well, and that was a fact. Of course, he had been up half the night fighting the blaze, and that hadn’t helped any. He fancied he had a bit of a headache, and his nerves seemed a little jangled. His insides were probably in their usual balky state. He sighed, wished he were in better health, and glanced around at the other members of the company as they rose grumpily from their beds.

He sighed again, opened his locker, took out his depilator, and ran it quickly over his face. Then, from his assortment of bottles, he began picking over his morning dosage. Vitamins, of course; got to keep plenty of vitamins in the system, or it goes all to pot on you. A, B1, B2, B12, C, ... and on down the alphabet and past it to A-G. All-purpose mineral capsules, presumably containing every element useful to the human body and possibly a couple that weren’t. Two APC capsules. (Aspirin-Phenacetin-Caffeine. He liked the way those words sounded; very medicinal.) A milk-of-magnesia tablet, just in case. A couple of patent-mixture pills that were supposed to increase the bile flow. (MacNeil wasn’t quite sure what bile was, but he was quite sure that its increased flow would work wonders within.) A largish tablet of sodium bicarbonate to combat excess gastric acidity—obviously a horrible condition, whatever it was. He topped it all off with a football-shaped capsule containing Liquid Glandolene—“Guards the system against glandular imbalance!”—and felt himself ready to face the day. At least, until breakfast.

He slipped several bottles into his belt-pak after he had put on his field uniform, so that he could get at them at mealtimes, and trudged out toward the mess hall to the meager breakfast that awaited him.

“Specifically,” said Colonel Fennister, “what we want to know is: What are our chances of staying alive until the relief ship comes?”

He and most of the other officers were still groggy-eyed, having had too much to do to even get an hour’s sleep the night before. Only the phlegmatic Major Grodski looked normal; his eyes were always about half closed.

Captains Jones and Bellwether, in charge of A and B Companies respectively, and their lieutenants, Mawkey and Yutang, all looked grim and irritable.

The civilian components of the policy group looked not one 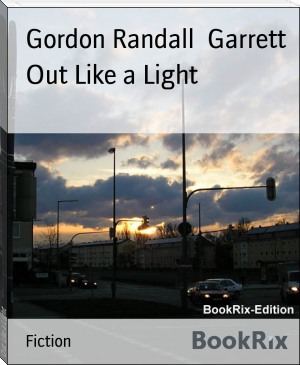