Joe Kenmore heard the airlock close with a sickening wheeze and then a clank. In desperation he turned toward Haney. "My God, we've been locked out!"

Through the transparent domes of their space helmets, Joe could see a look of horror and disbelief pass across Haney's face. But it was true! Joe and his crew were locked out of the Space Platform.

Four thousand miles below circled the Earth. Under Joe's feet rested the solid steel hull of his home in outer space. But without tools there was no hope of getting back inside. Joe looked at his oxygen meter. It registered thirty minutes to live.

Space Tug by Murray Leinster is an independent sequel to the author's popular Space Platform, which is also available in a Pocket Book edition. Both books were published originally by Shasta Publishers.

Of other books by Murray Leinster, the following are science-fiction:

THE LAWS OF CHANCE
(anthology)

[A] Published in a Pocket Book edition.

This Pocket Book includes every word contained in the original, higher-priced edition. It is printed from brand-new plates made from completely reset, clear, easy-to-read type.

No evidence has been found that the copyright of this book has been renewed.

All rights reserved. This book, or any part thereof, may not be reproduced in any manner without written permission of the publisher, except for brief quotations embodied in critical articles or reviews. For information, address: Shasta Publishers, 5525 South Blackstone Avenue, Chicago 37, Illinois.

Copyright, 1953, by Will F. Jenkins. This Pocket Book edition is published by arrangement with Shasta Publishers. Library of Congress Catalog Card Number: 53-7292. Printed in the U. S. A.

To the world at large, of course, it was just another day. A different sort entirely at different places on the great, round, rolling Earth, but nothing out of the ordinary. It was Tuesday on one side of the Date Line and Monday on the other. It was so-and-so's wedding anniversary and so-and-so's birthday and another so-and-so would get out of jail today. It was warm, it was cool, it was fair, it was cloudy. One looked forward to the future with confidence, with hope, with uneasiness or with terror according to one's temperament and one's geographical location and past history. To most of the human race this was nothing whatever but just another day.

But to Joe Kenmore it was a most particular day indeed. Here, it was the gray hour just before sunrise and already there were hints of reddish colorings in the sky. It was chilly, and somehow the world seemed still and breathless. To Joe, the feeling of tensity marked this morning off from all the other mornings of his experience.

He got up and began to dress, in Major Holt's quarters back of that giant steel half-globe called the Shed, near the town of Bootstrap. He felt queer because he felt so much as usual. By all the rules, he should have experienced a splendid, noble resolution and a fiery exaltation, and perhaps even an admirable sensation of humility and unworthiness to accomplish what was expected of him today. And, deep enough inside, he felt suitable emotion. But it happened that he couldn't take time to feel things adequately today.

He was much more aware that he wanted some coffee rather badly, and that he hoped everything would go all right. He looked out of the windows at empty, dreary desert under the dawn sky. Today was the day he'd be leaving on a rather[Pg 2] important journey. He hoped that Haney and the Chief and Mike weren't nervous. He also hoped that nobody had gotten at the fuel for the pushpots, and that the slide-rule crew that had calculated everything hadn't made any mistakes. He was also bothered about the steering-rocket fuel, and he was uncomfortable about the business of releasing the spaceship from the launching cage. There was, too, cause for worry in the take-off rockets—if the tube linings had shrunk there would be some rather gruesome consequences—and there could always be last-minute orders from Washington to delay or even cancel everything.

In short, his mind was full of strictly practical details. He didn't have time to feel noble aspirations or sensations of high destiny. He had a very tricky and exacting job ahead of him.

The sky was growing lighter outside. Stars faded in a paling blue and the desert showed faint colorings. He tied his necktie. A deep-toned keening set up off to the southward, over the sere and dreary landscape. It was a faraway noise, something like the lament of a mountain-sized calf bleating for its mother. Joe took a deep breath. He looked, but saw nothing. The noise, though, told him that there'd been no cancellation of orders so far. He mentally uncrossed one pair of fingers. He couldn't possibly cross fingers against all foreseeable disasters. There weren't enough fingers—or toes either. But it was good that so far the schedule held.

He went downstairs. Major Holt was pacing up and down the living room of his quarters. Electric lights burned, but already the windows were brightening. Joe straightened up and tried to look casual. Strictly speaking, Major Holt was a family friend who happened also to be security officer here, in charge of protecting what went on in the giant construction Shed. He'd had a sufficiently difficult time of it in the past, and the difficulties might keep on in the future. He was also the ranking officer here and consequently the immediate boss of Joe's enterprise. Today's affair was still highly precarious. The whole thing was controversial and uncertain and might spoil the career of somebody with stars[Pg 3] on his collar if it should fail. So nobody in the high brass wanted the responsibility. If everything went well, somebody suitable would take the credit and the bows. Meanwhile Major Holt was boss by default.

He looked sharply at Joe. "Morning."

"Good morning, sir," said Joe. Major Holt's daughter Sally had a sort of understanding with Joe, but the major hadn't the knack of cordiality, and nobody felt too much at ease with him. Besides, Joe was wearing a uniform for the first time this morning. There were only eight such uniforms in the world, so far. It was black whipcord, with an Eisenhower jacket, narrow silver braid on the collar and cuffs, and a silver rocket for a badge where a plane pilot wears his wings. It was strictly practical. Against accidental catchings in machinery, the trousers were narrow and tucked into ten-inch soft leather boots, and the wide leather belt had flat loops for the attachment of special equipment. Its width was a brace against the strains of acceleration. Sally had had much to do with its design.

But it hadn't yet been decided by the Pentagon whether the Space Exploration Project would be taken over by the Army or the Navy or the Air Corps, so Joe wore no insignia of rank. Technically he was still a civilian.

The deep-toned noise to the south had become a howl, sweeping closer and trailed by other howlings.

"The pushpots are on the way over, as you can hear," said the major detachedly, in the curious light of daybreak and electric bulbs together. "Your crew is up and about. So far there seems to be no hitch. You're feeling all right for the attempt today?"

"If you want the truth, sir, I'd feel better with about ten years' practical experience behind me. But my gang and myself—we've had all the training we can get without an actual take-off. We're the best-trained crew to try it. I think we'll manage."

"We may have to do better than that," admitted Joe wrily.

"True enough. You may." The major paused. "You're well[Pg 4] aware that there are—ah—people who do not altogether like the idea of the United States possessing an artificial satellite of Earth."

"I ought to know it," admitted Joe.

The Earth's second, man-constructed moon—out in space for just six weeks now—didn't seem nowadays like the bitterly contested achievement it actually was. From Earth it was merely a tiny speck of light in the sky, identifiable for what it was only because it moved so swiftly and serenely from the sunset toward the east, or from night's darkness into the dawn-light. But it had been fought bitterly before it was launched. It was first proposed to the United Nations, but even discussion in the Council was vetoed. So the United States had built it alone. Yet the nations which objected to it as an international project liked it even less as a national one, and they'd done what they could to wreck it.

The building of the great steel hull now out there in emptiness had been fought more bitterly, by more ruthless and more highly trained saboteurs, than any other enterprise in history. There'd been two attempts to blast it with atomic bombs. But it was high aloft, rolling grandly around the Earth, so close to its primary that its period was little more than four hours; and it rose in the west and set in the east six times a day.

Today Joe would try to get a supply ship up to it, a very small rocket-driven cargo ship named Pelican One. The crew of the Platform needed food and air and water—and especially the means of self-defense. Today's take-off would be the first attempt at a rocket-lift to space.

"The enemies of the Platform haven't given up," said the major formidably. "And they used spectroscopes on the Platform's rocket fumes. Apparently they've been able to duplicate our fuel."

Major Holt went on: "For more than a month Military Intelligence has been aware that rockets were under construction behind the Iron Curtain. They will be guided missiles, and they will carry atom bomb heads. One or more may be finished any day. When they're finished, you can bet that[Pg 5] they'll be used against the Platform. And you will carry up the first arms for the Platform. Your ship carries half a dozen long-range interceptor rockets to handle any attack from Earth. It's vitally important for them to be delivered."

"Not if they deny guilt," said the major ironically, "and if we have nothing to gain by war. The Platform is intended to defend the peace of the world. If it is destroyed, we won't defend the peace of the world by going to war over it. But while the Platform can defend itself, it is not likely that anyone will dare to make war. So you have a very worthwhile mission. I suggest that you have breakfast and report to the Shed. I'm on my way there now."

The major started for the door. Then he stopped. He hesitated, and said abruptly, "If my security measures have failed, Joe, you'll be killed. If there has been sabotage or carelessness, it will be my fault."

"I'm sure, sir, that everything anybody could do—"

"Everything anybody can do to destroy you has been done," said the major grimly. "Not only sabotage, Joe, but blunders and mistakes and stupidities. That always happens. But—I've done my best. I suspect I'm asking your forgiveness if my best hasn't been good enough."

Then, before Joe could reply, the major went hurriedly away.

Joe frowned for a moment. It occurred to him that it must be pretty tough to be responsible for the things that other men's lives depend on—when you can't share their danger. But just then the smell of coffee reached his 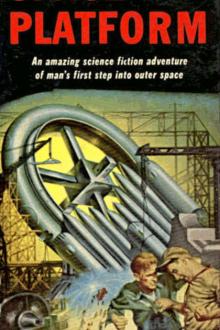