[Transcriber's Note: This etext was produced from
Galaxy Science Fiction February 1964.
Extensive research did not uncover any evidence that
the U.S. copyright on this publication was renewed.]

They came In friendship and love.
They couldn't help the way they looked!

Judge Carter Gates of the Third Circuit Court finished his chicken salad on whole wheat, thoughtfully crumpled the waxed paper bag and turned to drop it in the waste basket behind his chair—and sat transfixed.

Through his second-floor office window, he saw a forty-foot flower-petal shape of pale turquoise settling gently between the well-tended petunia beds on the courthouse lawn. On the upper, or stem end of the vessel, a translucent pink panel popped up and a slender, graceful form not unlike a large violet caterpillar undulated into view.

Judge Gates whirled to the telephone. Half an hour later, he put it to the officials gathered with him in a tight group on the lawn.

"Boys, this thing is intelligent; any fool can see that. It's putting together what my boy assures me is some kind of talking machine, and any minute now it's going to start communicating. It's been twenty minutes since I notified Washington on this thing. It won't be long before somebody back there decides this is top secret and slaps a freeze on us here that will make the Manhattan Project look like a publicity campaign. Now, I say this is the biggest thing that ever happened to Plum County—but if we don't aim to be put right out of the picture, we'd better move fast."

"What you got in mind, Jedge?"

"I propose we hold an open hearing right here in the courthouse, the minute that thing gets its gear to working. We'll put it on the air—Tom Clembers from the radio station's already stringing wires, I see. Too bad we've got no TV equipment, but Jody Hurd has a movie camera. We'll put Willow Grove on the map bigger'n Cape Canaveral ever was."

Ten minutes after the melodious voice of the Fianna's translator had requested escort to the village headman, the visitor was looking over the crowded courtroom with an expression reminiscent of a St. Bernard puppy hoping for a romp. The rustle of feet and throat-clearing subsided and the speaker began:

"People of the Green World, happy the cycle—"

Heads turned at the clump of feet coming down the side aisle; a heavy-torsoed man of middle age, bald, wearing a khaki shirt and trousers and rimless glasses and with a dark leather holster slapping his hip at each step, cleared the end of the front row of seats, planted himself, feet apart, yanked a heavy nickel-plated .44 revolver from the holster, took aim and fired five shots into the body of the Fianna at a range of ten feet.

The violet form whipped convulsively, writhed from the bench to the floor with a sound like a wet fire hose being dropped, uttered a gasping twitter, and lay still. The gunman turned, dropped the pistol, threw up his hands, and called:

There was a moment of stunned silence; then a rush of spectators for the alien. The sheriff's three-hundred-and-nine-pound bulk bellied through the shouting mob to take up a stand before the khaki-clad man.

"I always knew you was a mean one, Cecil Stump," he said, unlimbering handcuffs, "ever since I seen you makin' up them ground-glass baits for Joe Potter's dog. But I never thought I'd see you turn to cold-blooded murder." He waved at the bystanders. "Clear a path through here; I'm takin' my prisoner over to the jail."

"Jest a dad-blamed minute, Sheriff." Stump's face was pale, his glasses were gone and one khaki shoulder strap dangled—but what was almost a grin twisted one meaty cheek. He hid his hands behind his back, leaned away from the cuffs. "I don't like that word 'prisoner'. I ast you fer pertection. And better look out who you go throwin' that word 'murder' off at, too. I ain't murdered nobody."

The sheriff blinked, turned to roar, "How's the victim, Doc?"

A small gray head rose from bending over the limp form of the Fianna. "Deader'n a mackerel, Sheriff."

"That ain't no stranger. That's a varmint. Murder's got to do with killin' humerns, way I understand it. You goin' to tell me that thing's humern?"

Ten people shouted at once:

"—tell me you can simply kill—"

The sheriff raised his hands, his jowls drawn down in a scowl. "What about it, Judge Gates? Any law against Cecil Stump killing the ... uh...?"

The judge thrust out his lower lip. "Well, let's see," he began. "Technically—"

"Good Lord!" someone blurted. "You mean the laws on murder don't define what constitutes—I mean, what—"

"What a humern is?" Stump snorted. "Whatever it says, it sure-bob don't include no purple worms. That's a varmint, pure and simple. Ain't no different killin' it than any other critter."

"Then, by God, we'll get him for malicious damage," a man called. "Or hunting without a license—out of season!"

Stump went for his hip pocket, fumbled out a fat, shapeless wallet, extracted a thumbed rectangle of folded paper, offered it.

"I'm a licensed exterminator. Got a permit to carry the gun, too. I ain't broken no law." He grinned openly now. "Jest doin' my job, Sheriff. And at no charge to the county."

A smaller man with bristly red hair flared his nostrils at Stump. "You blood-thirsty idiot!" He raised a fist and shook it. "We'll be a national disgrace—worse than Little Rock! Lynching's too good for you!"

"Hold on there, Weinstein," the sheriff cut in. "Let's not go gettin' no lynch talk started."

"Lynch, is it!" Cecil Stump bellowed, his face suddenly red. "Why, I done a favor for every man here! Now you listen to me! What is that thing over there?" He jerked a blunt thumb toward the judicial bench. "It's some kind of critter from Mars or someplace—you know that as well as me! And what's it here for? It ain't for the good of the likes of you and me, I can tell you that. It's them or us. And this time, by God, we got in the first lick!"

"Now, hold on right there. I'm as liberal-minded as the next feller. Hell, I like a nigger—and I can't hardly tell a Jew from a white man. But when it comes to takin' in a damned purple worm and callin' it humern—that's where I draw the line."

Sheriff Hoskins pushed between Stump and the surging front rank of the crowd. "Stay back there! I want you to disperse, peaceably, and let the law handle this."

"I reckon I'll push off now, Sheriff," Stump hitched up his belt. "I figgered you might have to calm 'em down right at first, but now they've had a chance to think it over and see I ain't broken no law, ain't none of these law-abiding folks going to do anything illegal—like tryin' to get rough with a licensed exterminator just doin' his job." He stooped, retrieved his gun.

"Here, I'll take that," Sheriff Hoskins said. "You can consider your gun license canceled—and your exterminatin' license, too."

"Sure. I'm cooperative, Sheriff. Anything you say. Send it around to my place when you're done with it." He pushed his way through the crowd to the corridor door.

"The rest of you stay put!" a portly man with a head of bushy white hair pushed his way through to the bench. "I'm calling an emergency Town Meeting to order here and now!"

He banged the gavel on the scarred bench top, glanced down at the body of the dead alien, now covered by a flag.

"Gentlemen, we've got to take fast action. If the wire services get hold of this before we've gone on record, Willow Grove'll be a blighted area."

"Never mind what's legal, Judge. Sure, this calls for Federal legislation—maybe a Constitutional amendment—but in the meantime, we're going to redefine what constitutes a person within the incorporated limits of Willow Grove!"

"That's the least we can do," a thin-faced woman snapped, glaring at Judge Gates. "Do you think we're going to set here and condone this outrage?"

"Nonsense!" Gates shouted. "I don't like what happened any better than you do—but a person—well, a person's got two arms and two legs and—"

"Shape's got nothing to do with it," the chairman cut in. "Bears walk on two legs! Dave Zawocky lost his in the war. Monkeys have hands."

"Any intelligent creature—" the woman started.

"Nope, that won't do, either; my unfortunate cousin's boy Melvin was born an imbecile, poor lad. Now, folks, there's no time to waste. We'll find it very difficult to formulate a satisfactory definition based on considerations such as these. However, I think we can resolve the question in terms that will form a basis for future legislation on the question. It's going to make some big changes in things. Hunters aren't going to like it—and the meat industry will be affected. But if, as it appears, we're entering into an era of contact with ... ah ... creatures from other worlds, we've got to get our house in order."

"You tell 'em, Senator!" someone yelled.

"We better leave this for Congress to figger out!" another voice insisted.

The senator held up his hands. "Quiet, everybody. There'll be reporters here in a matter of minutes. Maybe our ordinance won't hold water. But it'll start 'em thinking—and it'll make a lots better copy for Willow Grove than the killing."

"What you got in mind, Senator?"

"What about a man who commits a violent act, then?" Judge Gates demanded. "What's he, eh?"

On the courthouse steps Cecil Stump stood, hands in hip pockets, talking to a reporter from the big-town paper in Mattoon, surrounded by a crowd of late-comers who had missed the excitement inside. He described the accuracy of his five shots, the sound they had made hitting the big blue snake, and the ludicrous spectacle the latter had presented in its death agony. He winked at a foxy man in overalls picking his nose at the edge of the crowd.

"Guess it'll be a while 'fore any more damned reptiles move in here like they owned the place," he concluded.

The courthouse doors banged wide; excited citizens poured forth, veering aside from Cecil Stump. The crowd around him thinned, broke up as its members collared those emerging with the hot news. The reporter picked a target.

"Perhaps you'd care to give me a few details of the action taken by the ... ah ... Special Committee, sir?"

Senator Custis pursed his lips. "A session of the Town Council was called," he said. "We've defined what a person is in this town—"

"—and also what can be classified as vermin," Custis went on.

Stump closed his mouth with a snap.

"Here, that s'posed to be some kind of slam at me, Custis? By God, come election time...."

Above, the door opened again. A tall man in a leather jacket stepped out, stood looking down. The crowd pressed back. Senator Custis and the reporter moved aside. The newcomer came down the steps slowly. He carried Cecil Stump's nickel-plated .44 in his hand.

"Here," he said. His voice carried a sudden note of strain. "Who're you?"

The man reached the foot of the steps, raised the revolver and cocked it with a thumb.

"I'm the new exterminator," he said.

End of the Project Gutenberg EBook of A Bad Day for Vermin, by Keith Laumer

The Basket of Flowers by Christoph von Schmid (novels to read for beginners .TXT) 📕 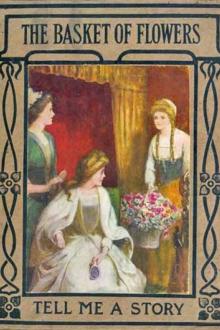