VOL. VII, No. 1                    CONTENTS                    July, 1931 COVER DESIGN H. W. WESSO   Painted in Water-Colors from a Scene in "The Doom from Planet 4." THE DOOM FROM PLANET 4 JACK WILLIAMSON   5 A Ray of Fire, Green, Mysterious, Stabs Through the Night to Dan on His Ship. It Leads Him to an Island of Unearthly Peril. THE HANDS OF ATEN H. G. WINTER   20 Out of the Solid Ice Craig Hews Three Long-Frozen Egyptians and Is at Once Caught Up into Amazing Adventure. (A Complete Novelette.) THE DIAMOND THUNDERBOLT H. THOMPSON RICH   46 Locked in a Rocket and Fired into Space! Such Was the Fate which Awaited Young Stoddard at the End of the Diamond Trail! THE SLAVE SHIP FROM SPACE A. R. HOLMES   68 Three Kidnapped Earthlings Show Xantra of the Tillas How "Docile" Earth Slaves Can Be. THE REVOLT OF THE MACHINES NAT SCHACHNER AND ARTHUR L. ZAGAT   88 Something in the Many-Faceted Mind of the Master Machine Spurs It to Diabolical Revolt Against the Authority of Its Human Masters. THE EXILE OF TIME RAY CUMMINGS   109 Only Near the End of the World Does Fate Catch Up with Tugh, the Cripple Who Ran Amuck Through Time. (Conclusion.) THE READERS' CORNER ALL OF US   129 A Meeting Place for Readers of Astounding Stories.

The Doom from Planet 4

"S O S. S O S. S O S." Three short, three long, three short, the flashes winked from the dark headland. Dan McNally, master and owner of the small and ancient trading schooner, Virginia, caught the feeble flickering[6] light from the island as he strode across the fore-deck. He stopped, stared at the looming black line of land beneath the tropical stars. Again light flashed from a point of rock far above the dim white line of phosphorescent surf, spelling out the signal of distress.

A ray of fire, green, mysterious, stabs through the night to Dan on his ship. It leads him to an island of unearthly peril.

"Somebody bane callin' with a flashlight, I t'ank," the big Swede, Larsen, rumbled from the wheel.

Dan thought suddenly of a reply. He rushed into the charthouse, to return in a moment with a lighted lantern and a copy of the Nautical Almanac which would serve to hide the flame between flashes. He flashed an answer.

Again the pale light flickered from the dark mass of land, spelling words out rather slowly, as if the sender were uncertain in his knowledge of Morse. Surprised as Dan had been by the signal from an island marked on the charts as uninhabited, he was astonished at the message that now came to him.

"You are in terrible danger," he read in the flashes. "Dreadful thing here. Hurry away. Radio for warships. I am—"

The winking light suddenly went out. Dan strained his eyes to watch the point where it had been, and a few seconds later he saw a curious thing. A darting, stabbing lance of green fire flashed out across the barren, rocky cliff, lighting it fleetingly with pale green radiance. It leapt out and was gone in an instant, leaving the shoulder of the island dark as before.

Dan watched for long minutes, but he saw nothing more brilliant than the pale gleam of phosphorescence where the waves dashed against the sheer granite wall of the island.

"What you t'ank?" Larsen broke in upon him.

an started, then answered slowly. "I don't know. First I thought there must be a lunatic at large. But that green light! I didn't like it."

He stared again at the looming mass of the island. Davis Island is one of the innumerable tiny islets that dot the South Pacific; merely the summit of a dead volcano, projecting above the sea. Nominally claimed by Great Britain, it is marked on the charts as uninhabited.

"Radio for warships, eh?" he muttered. A wireless transmitter was one of many modern innovations that the Virginia did not boast. She had been gathering copra and shell among the islands long before such things came into common use, though Dan had invested his modest savings in her only a year before.

"What would anyone want with warships on Davis Island?" The name roused a vague memory. "Davis Island?" he repeated, staring in concentration at the black sea. "Of course!" It came to him suddenly. A newspaper article that he had read five years before, at about the time he had abandoned college in the middle of his junior year, to follow the call of adventure.

The account had dealt with an eclipse of the sun, visible only from certain points on the Pacific. One Dr. Hunter, under the auspices of a Western university, had sailed with his instruments and assistants to Davis Island, to study the solar corona during the few precious moments when the shadow covered the sun, and to observe the displacement of certain stars as a test of Einstein's theory of relativity.

The reporter had interviewed the party at San Francisco, on the eve of sailing. There had been photographs of the chartered vessel, of Dr. Hunter and his instruments, and of his daughter, Helen, who acted as his secretary. She looked not at all like a scientist, Dan recalled. In fact, her face had seemed rather pretty, even in the blurred newspaper half-tone.[7]

But the memory cast no light upon the present puzzle. In the rambling years that had led him to this spot upon the old Virginia, he had lost touch with the science that had interested him during his college days. He had heard nothing of the results of the Hunter expedition. But this island had been its destination.

e turned decisively to the man at the wheel. "Larsen, we'll stand well offshore till daylight," he said. "Then, unless we see something unusual, we can sail in and land a boat to—"

The sentence was never finished. Through the corner of his eye, Dan saw a ray of green light darting toward them from the island. A line of green fire seemed to reach out and strike him a physical blow. Green flame flared around him; and somehow he was hurled from the bridge, clear of the rail and into the sea.

His impression of the incident was very confused. He seemed to have struck the water with such force that his breath was knocked out. He struggled back to the surface, strangling, and coughing the bitter brine from his lungs. It was several minutes before he was comfortably treading water, and able to see what had happened.

The old schooner was then a hundred yards away, careening crazily, and drifting aimlessly before the light breeze. The strange green fire had vanished. Parts of the ship apparently had been carried away or disintegrated by the ray or the force of which it was a visible effect. The mainmast was down, and was hanging over the side in a tangle of rigging.

Bright yellow flames were dancing at a dozen points about the wreckage on the listing deck. A grotesque broken thing, queerly illuminated by the growing fires, was hanging over the wheel—the body of Larsen. No living thing was visible; and Dan, after a second look at the wreck of the bow, knew that he must be the sole survivor of the catastrophe.

"Too bad about the boys," he muttered through teeth that chattered, for the cold water had already chilled him. "And poor old Larsen."

He thought again of the warning flashed from the shore. "Guess there must be something hellish afoot after all," he muttered again. "The flicker of green that stopped the signals, and the green fire that got us—what can they mean?" He looked toward the looming black shadow of the island, and began divesting himself of his clinging, sodden garments. "I don't wonder somebody wanted battleships. But even a battleship, if that green ray hit it—"

He drew a deep breath and ducked his head while he unlaced his shoes and kicked out of them. Then, with a final look at the burning wreck of the Virginia, he tore off the last bit of his underclothing and swam for the shore in an easy crawl.

he rocky ramparts of Davis Island were three or four miles away. But there was no wind; the black sea was calm save for a long, hardly perceptible swell. A strong swimmer and in superb condition, Dan felt no anxiety about being able to make the distance. There was danger, however, that a shark would run across him, or that he could not find a landing place upon the rocky shore.

Four bells had rung when he had seen the first flash; it had been just ten o'clock. And it was some four hours later that Dan touched bottom and waded wearily up a bit of smooth hard beach, through palely glittering phosphorescent foam.

He rubbed the brine from his tired limbs, and sat down for a time, in a spot where a fallen boulder sheltered his naked body from the cool morning wind. In a few moments[8] he rose, flexed his muscles and peered through the starlit darkness for a way up the cliff behind the beach. He found it impossible to distinguish anything.

"Got to keep moving, or find some clothes," he muttered. "And I may stumble onto what made the green light. Darn lucky I've been so far, anyhow. Larsen and the others—but I shan't think of them. Wonder who was flashing the signals from the island. And did the green fire get him?"

He turned to look out over the black plain of the sea. Far out, the Virginia lay low in the water, a pillar of yellow flame rising from her hull. As he watched, the flame flickered and vanished: the old schooner, he supposed, had sunk. Then he noticed a pale glow come into being among the stars on the eastern horizon.

"Hello," he muttered again. "So we're going to have a moon? In the last quarter, but still it ought to light me up from this beach."

A moment later the horns of the crescent had come above the black rim of the sea. Dan waited, swinging his arms and tramping up and down on the sand, until the silvery moon had cleared the horizon and illuminated the rugged face of the cliff with pale white radiance.

He chose a path to the top of the cliff and clambered up, emerging in a jungle-like thicket of brush. Picking his way with the greatest caution, yet scratching his naked skin most painfully, he made his way for a few yards through the brush to a point of vantage from which he could look about.

He was, he perceived, in a narrow valley or ravine, with rugged black walls rising sheer on either side. The silvery light of 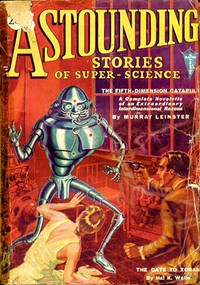 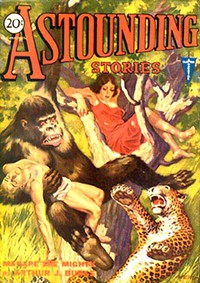