*** START OF THIS PROJECT GUTENBERG EBOOK AN OUNCE OF CURE *** Produced by Greg Weeks, LN Yaddanapudi and the Online Distributed Proofreading Team at http://www.pgdp.net

An
Ounce
of
Cure

The doctor's office was shiny and modern. Behind the desk the doctor smiled down at James Wheatley through thick glasses. "Now, then! What seems to be the trouble?"

Wheatley had been palpitating for five days straight at the prospect of coming here. "I know it's silly," he said. "But I've been having a pain in my toe."

"Indeed!" said the doctor. "Well, now! How long have you had this pain, my man?"

"About six months now, I'd say. Just now and then, you know. It's never really been bad. Until last week. You see—"

"I see," said the doctor. "Getting worse all the time, you say."

Wheatley wiggled the painful toe reflectively. "Well—you might say that. You see, when I first—"

"How old did you say you were, Mr. Wheatley?"

"Fifty-five!" The doctor leafed through the medical record on his desk. "But this is incredible. You haven't had a checkup in almost ten years!"

[47] "I guess I haven't," said Wheatley, apologetically. "I'd been feeling pretty well until—"

"Of course you may be feeling well enough, but that doesn't mean everything is just the way it should be. And now, you see, you're having pains in your toes!"

"One toe," said Wheatley. "The little one on the right. It seemed to me—"

"One toe today, perhaps," said the doctor heavily. "But tomorrow—" He heaved a sigh. "How about your breathing lately? Been growing short of breath when you hurry upstairs?"

"Well—I have been bothered a little."

"I thought so! Heart pound when you run for the subway? Feel tired all day? Pains in your calves when you walk fast?"

"Uh—yes, occasionally, I—" Wheatley looked worried and rubbed his toe on the chair leg.

"You know that fifty-five is a dangerous age," said the doctor gravely. "Do you have a cough? Heartburn after dinner? Prop up on pillows at night? Just as I thought! And no checkup for ten years!" He sighed again.

"I suppose I should have seen to it," Wheatley admitted. "But you see, it's just that my toe—"

"My dear fellow! Your toe is part of you. It doesn't just exist down there all by itself. If your toe hurts, there must be a reason."

Wheatley looked more worried than ever. "There must? I thought—perhaps you could just give me a little something—"

"To stop the pain?" The doctor looked shocked. "Well, of course I could do that, but that's not getting at the root of the trouble, is it? That's just treating symptoms. Medieval quackery. Medicine has advanced a long way since your last checkup, my friend. And even treatment has its dangers. Did you know that more people died last year of aspirin poisoning than of[48] cyanide poisoning?"

Wheatley wiped his forehead. "I—dear me! I never realized—"

"We have to think about those things," said the doctor. "Now, the problem here is to find out why you have the pain in your toe. It could be inflammatory. Maybe a tumor. Perhaps it could be, uh, functional ... or maybe vascular!"

"Perhaps you could take my blood pressure, or something," Wheatley offered.

"Well, of course I could. But that isn't really my field, you know. It wouldn't really mean anything, if I did it. But there's nothing to worry about. We have a fine Hypertensive man at the Diagnostic Clinic." The doctor checked the appointment book on his desk. "Now, if we could see you there next Monday morning at nine—"

"This is my toe?" asked Wheatley, edging toward the doctors. It seemed he had been waiting for a very long time.

Presently another doctor came by. He looked very grave as he sat down beside Wheatley. "Tell me, Mr. Wheatley, have you had an orthodiagram recently?"

The doctor looked even graver, and walked away, muttering to himself. In a few moments he came back with two more doctors. "—no question in my mind that it's cardiomegaly," he was saying, "but Haddonfield should know. He's the best Left Ventricle man in the city. Excellent paper in the AMA Journal last July: 'The Inadequacies of Modern Orthodiagramatic Techniques in Demonstrating Minimal Left Ventricular Hypertrophy.' A brilliant study, simply brilliant! Now this patient—" He glanced toward Wheatley, and his voice dropped to a mumble.

Presently two of the men nodded, and one walked over to Wheatley, cautiously, as though afraid he might suddenly vanish. "Now, there's nothing to be worried about, Mr. Wheatley," he said. "We're going to have you fixed up in just no time at all. Just a few more studies. Now, if you could see me in Valve Clinic tomorrow afternoon at three—"

Wheatley nodded. "Nothing serious, I hope?"

"Serious? Oh, no! Dear me, you mustn't worry. Everything is going to be all right," the doctor said.

"Well—I—that is, my toe is still bothering me some. It's not nearly as bad, but I wondered if maybe you—"

Dawn broke on the doctor's face. "Give you something for it? Well now, we aren't Therapeutic men, you understand. Always best to let the expert handle the problem in his own field." He paused, stroking his chin for a moment. "Tell you what we'll do. Dr. Epstein is one of the finest Therapeutic men in the city. He could take care of you in a jiffy. We'll see if we can't arrange an appointment with him after you've seen me tomorrow."

Mr. Wheatley was late to Mitral Valve Clinic the next day because he had gone to Aortic Valve Clinic by mistake, but finally he found the right waiting room. A few hours later he was being thumped, photographed, and listened to. Substances were popped into his right arm, and withdrawn from his left [50]arm as he marveled at the brilliance of modern medical techniques. Before they were finished he had been seen by both the Mitral men and the Aortic men, as well as the Great Arteries man and the Peripheral Capillary Bed man.

The Therapeutic man happened to be in Atlantic City at a convention and the Rheumatologist was on vacation, so Wheatley was sent to Functional Clinic instead. "Always have to rule out these things," the doctors agreed. "Wouldn't do much good to give you medicine if your trouble isn't organic, now, would it?" The Psychoneuroticist studied his sex life, while the Psychosociologist examined his social milieu. Then they conferred for a long time.

Three days later he was waiting in the hallway downstairs again. Heads met in a huddle; words and phrases slipped out from time to time as the discussion grew heated.

"But we can't ignore the endocrine implications, doctor—"

"You're perfectly right there, of course. Bittenbender at the University might be able to answer the question. No better Pituitary Osmoreceptorologist in the city—"

"—a Tubular Function man should look at those kidneys first. He's fifty-five, you know."

"—has anyone studied his filtration fraction?"

After a while James Wheatley rose from the bench and slipped out the door, limping slightly as he went.

The room was small and dusky, with heavy Turkish drapes obscuring the dark hallway beyond. A suggestion of incense hung in the air.

In due course a gaunt, swarthy man in mustache and turban appeared through the curtains and bowed solemnly. "You come with a problem?" he asked, in a slight accent.

"As a matter of fact, yes," James Wheatley said hesitantly. "You see, I've been having a pain in my right little toe...."

This etext was produced from "The Counterfeit Man: More Science Fiction Stories by Alan E. Nourse" published in 1963. Extensive research did not uncover any evidence that the U.S. copyright on this publication was renewed.

End of the Project Gutenberg EBook of An Ounce of Cure, by Alan Edward Nourse 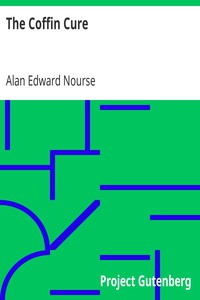