Transcriber's note:
Extensive research did not uncover any evidence that the United States copyright on this publication was renewed.

One of the truly unusual novels of science-fiction—a vivid portrayal of the deadliest planet ever discovered!

The sound came swiftly nearer, rising in pitch and swelling in volume. Then it broke through the clouds, tall and black and beautifully deadly—the Gern battle cruiser, come to seek them out and destroy them.

Humbolt dropped inside the stockade, exulting. For two hundred years his people had been waiting for the chance to fight the mighty Gern Empire ...

... with bows and arrows against blasters and bombs!

JOE AND BLANCHE KOLARIK,
whose friendship and encouragement in the years gone by will never be forgotten.

A Pyramid Book
published by arrangement with Gnome Press, Inc.

This book is fiction. No resemblance is intended between any character herein and any person, living or dead; any such resemblance is purely coincidental.

For seven weeks the Constellation had been plunging through hyperspace with her eight thousand colonists; fleeing like a hunted thing with her communicators silenced and her drives moaning and thundering. Up in the control room, Irene had been told, the needles of the dials danced against the red danger lines day and night.

She lay in bed and listened to the muffled, ceaseless roar of the drives and felt the singing vibration of the hull. We should be almost safe by now, she thought. Athena is only forty days away.

Thinking of the new life awaiting them all made her too restless to lie still any longer. She got up, to sit on the edge of the bed and switch on the light. Dale was gone—he had been summoned to adjust one of the machines in the ship's X-ray room—and Billy was asleep, nothing showing of him above the covers but a crop of brown hair and the furry nose of his ragged teddy bear.

She reached out to straighten the covers, gently, so as not to awaken him. It happened then, the thing they had all feared.

From the stern of the ship came a jarring, deafening explosion. The ship lurched violently, girders screamed, and the light flicked out.

In the darkness she heard a rapid-fire thunk-thunk-thunk as the automatic guard system slid inter-compartment p. 6 doors shut against sections of the ship suddenly airless. The doors were still thudding shut when another explosion came, from toward the bow. Then there was silence; a feeling of utter quiet and motionlessness.

The fingers of fear enclosed her and her mind said to her, like the cold, unpassionate voice of a stranger: The Gerns have found us.

The light came on again, a feeble glow, and there was the soft, muffled sound of questioning voices in the other compartments. She dressed, her fingers shaking and clumsy, wishing that Dale would come to reassure her; to tell her that nothing really serious had happened, that it had not been the Gerns.

It was very still in the little compartment—strangely so. She had finished dressing when she realized the reason: the air circulation system had stopped working.

That meant the power failure was so great that the air regenerators, themselves, were dead. And there were eight thousand people on the Constellation who would have to have air to live....

The Attention buzzer sounded shrilly from the public address system speakers that were scattered down the ship's corridors. A voice she recognized as that of Lieutenant Commander Lake spoke:

"War was declared upon Earth by the Gern Empire ten days ago. Two Gern cruisers have attacked us and their blasters have destroyed the stern and bow of the ship. We are without a drive and without power but for a few emergency batteries. I am the Constellation's only surviving officer and the Gern commander is boarding us to give me the surrender terms.

The speaker cut off. She stood without moving and heard again the words: I am the Constellation's only surviving officer....

The Gerns had killed her father.

He had been second-in-command of the Dunbar expedition p. 7 that had discovered the world of Athena and his knowledge of Athena was valuable to the colonization plans. He had been quartered among the ship's officers—and the Gern blast had destroyed that section of the ship.

She sat down on the edge of the bed again and tried to reorient herself; to accept the fact that her life and the lives of all the others had abruptly, irrevocably, been changed.

The Athena Colonization Plan was ended. They had known such a thing might happen—that was why the Constellation had been made ready for the voyage in secret and had waited for months for the chance to slip through the ring of Gern spy ships; that was why she had raced at full speed, with her communicators silenced so there would be no radiations for the Gerns to find her by. Only forty days more would have brought them to the green and virgin world of Athena, four hundred light-years beyond the outermost boundary of the Gern Empire. There they should have been safe from Gern detection for many years to come; for long enough to build planetary defenses against attack. And there they would have used Athena's rich resources to make ships and weapons to defend mineral-depleted Earth against the inexorably increasing inclosure of the mighty, coldly calculating colossus that was the Gern Empire.

Success or failure of the Athena Plan had meant ultimate life or death for Earth. They had taken every precaution possible but the Gern spy system had somehow learned of Athena and the Constellation. Now, the cold war was no longer cold and the Plan was dust....

Billy sighed and stirred in the little-boy sleep that had not been broken by the blasts that had altered the lives of eight thousand people and the fate of a world.

She shook his shoulder and said, "Billy."

He raised up, so small and young to her eyes that the question in her mind was like an anguished prayer: Dear God—what do Gerns do to five-year-old boys?

He saw her face, and the dim light, and the sleepiness was suddenly gone from him. "What's wrong, Mama? And why are you scared?"

There was no reason to lie to him.

"The Gerns found us and stopped us."

"Oh," he said. In his manner was the grave thoughtfulness of a boy twice his age, as there always was. "Will they—will they kill us?"

"Get dressed, honey," she said. "Hurry, so we'll be ready when they let Daddy come back to tell us what to do."

They were both ready when the Attention buzzer sounded again in the corridors. Lake spoke, his tone grim and bitter:

"There is no power for the air regenerators and within twenty hours we will start smothering to death. Under these circumstances I could not do other than accept the survival terms the Gern commander offered us.

"He will speak to you now and you will obey his orders without protest. Death is the only alternative."

Then the voice of the Gern commander came, quick and harsh and brittle:

"This section of space, together with planet Athena, is an extension of the Gern Empire. This ship has deliberately invaded Gern territory in time of war with intent to seize and exploit a Gern world. We are willing, however, to offer a leniency not required by the circumstances. Terran technicians and skilled workers in certain fields can be used in the factories we shall build on Athena. The others will not be needed and there is not room on the cruisers to take them.

"Your occupation records will be used to divide you into two groups: the Acceptables and the Rejects. The Rejects will be taken by the cruisers to an Earth-type planet near here and left, together with the personal possessions in their compartments and additional, and ample, supplies. The Acceptables will then be taken on to Athena and at a later date the cruisers will return the Rejects to Earth.

"This division will split families but there will be no resistance to it. Gern guards will be sent immediately to make this division and you will wait in your compartments for them. You will obey their orders promptly p. 9 and without annoying them with questions. At the first instance of resistance or rebellion this offer will be withdrawn and the cruisers will go their way again."

In the silence following the ultimatum she could hear the soft, wordless murmur from the other compartments, the undertone of anxiety like a dark thread through it. In every compartment parents and children, brothers and sisters, were seeing one another for the last time....

The corridor outside rang to the tramp of feet; the sound of a dozen Gerns walking with swift military precision. She held her breath, her heart racing, but they went past her door and on to the corridor's end.

There she could faintly hear them entering compartments, demanding names, and saying, "Out—out!" Once she heard a Gern say, "Acceptables will remain inside until further notice. Do not open your doors after the Rejects have been taken out."

Billy touched her on the hand. "Isn't Daddy going to come?"

She remembered what the Gern commander had said about the Rejects being permitted to take their personal possessions. She had very little time in which to get together what she could carry....

There were two small bags in the compartment and she hurried to pack them with things she and Dale and Billy might need, not able to know which of them, if any, would be Rejects. Nor could she know whether she should put in clothes for a cold world or a hot one. The Gern commander had said the Rejects would be left on an Earth-type planet but where could it be? The Dunbar Expedition had explored across five hundred light-years of space and had found only one Earth-type world: Athena.

The Gerns were almost to her door when she had finished and she heard them enter the compartments across from her own. There came the hard, curt questions and the command: "Outside—hurry!" A woman said something in pleading question and there was the soft thud of a blow and the words: "Outside—do not ask p. 10 questions!" A moment later she heard the woman going down the corridor, trying to hold back her crying.

Then the Gerns were at her own door.

She held Billy's hand and waited for them with her heart hammering. She held her head high and composed herself with all the determination she could muster so that the arrogant Gerns would not see that she was afraid. Billy stood beside her as tall as his five years would permit, his teddy bear under his arm, and only the way his hand held to hers showed that he, too, was scared.

The door was flung open and two Gerns strode in.

The were big, dark men, with powerful, bulging muscles. They surveyed her and the room with a quick sweep of eyes that were like glittering obsidian, their mouths thin, cruel slashes in the flat, brutal planes of their faces.

"Your name?" snapped the one who carried a sheaf of occupation records.

"It's"—she tried to swallow the quaver in her voice and make it cool and unfrightened—"Irene Lois Humbolt—Mrs. Dale Humbolt."

The Gern glanced at the papers. "Where is your husband?"

"You are a Reject. Out—down the corridor with the others."

It was the tone of voice that had preceded the blow in the other compartment and the Gern took a quick step toward her. She 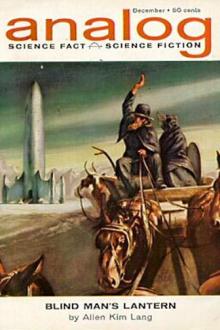