CHALLENGE ME WITH MONSTERS!

"From between the two shuffling dancers padded something on four feet. The canine-feline creature was more than just a head; it was a loose-limbed, graceful body fully eight feet in length, and the red eyes in the prick-eared head were those of a killer.... Words issued from between those curved fangs, words which Dane might not understand....

"Dane slid his blade out surreptitiously, setting its point against the palm of his hand and jabbing painfully; but the terrible creature continued to advance.... There was no blurring of its lines...."

Dane Thorson of the space-ship Solar Queen knew there was only one way to win out over this hideous thing—a battle to the end between his rational mind and the hypnotic witchcraft of Lumbrilo, the mental wizard of the planet Khatka.

He wanted to spend a short vacation on Khatka, not the rest of his life.

Was he physician or magician—or a little bit of both?

Tracking the forests had taught him that mad animals—whether real or imaginary—were to be feared.

Would his knowledge of alien life-forms help him in his fight against alien ghosts?

Not even this pilot's most scientific skill could overcome a voodoo charm's ground-drag.

On his own planet he was a witch doctor; on Earth he'd have been a master politician.

There is no evidence that the copyright on this publication was renewed.

Talk of heat—or better not—on Xecho. This water-logged world combined all the most unattractive features of a steam bath and one could only dream of coolness, greenness—more land than a stingy string of islands.

The young man on the promontory above the crash of the waves wore the winged cap of a spaceman with the insignia of a cargo-master and not much else, save a pair of very short shorts. He wiped one hand absently across his bare chest and brought it away damp as he studied, through protective sun goggles, the treacherous promise of the bright sea. One could swim—if he wanted to lose most of his skin. There were minute organisms in that liquid that smacked their lips—if they had lips—every time they thought of a Terran.

Dane Thorson licked his own lips, tasting salt, and plodded back through the sand of the spaceport to the berth of the Solar Queen. This had been a long day, and one with more snarl-ups than he cared to count, keeping him on a constant, dogged trot between the ship and the fitting yard where riggers labored with the slowest motions possible to the human body—or so it seemed to the exasperated acting-Cargo-Master of the Free Trader. Captain Jellico had long ago taken refuge in his cabin to preserve the remnants of his temper. Dane had been allowed no such escape.

The Queen had a schedule for refitting to serve as a mail ship, and that time allowance did not allow for humidity playing the devil with the innards of robot fitters. She had to be ready to lift when the Combine ship now plying that run set down and formally signed off in her favor. Luckily, [Pg 6]most of the work was done and Dane had given a last searching inspection before signing the rigger's book and reporting to his captain.

The air-conditioned interior of the Queen comforted him as he climbed to his quarters. Ship air was flat, chemically pure but unappetizing stuff. Today it was a relief to breathe. Dane went on to the bather. At least there was no lack of water—with the local skinners filtered out. It was chill but relaxing on his gaunt young body.

He was sealing on his lightest tunic when the ramp buzzer sounded. A visitor—oh, not the supervisor-rigger again! Dane went to answer with dragging feet. For the crew of the Queen at the moment numbered exactly four, with himself for general errand boy. Captain Jellico was in his quarters two levels above, Medic Tau was presumably overhauling his supplies, and Sindbad, ship's cat, asleep in some empty cabin.

Dane jerked his tunic into place, very much on his guard as he came to the head of the ramp. But it was not the supervisor-rigger. Dane, thoroughly used to unusual-appearing strangers, both human and alien, was impressed by this visitor.

He was tall, this quiet man, his great height accented by a fit leanness, a narrowness of waist and hip, a length of leg and arm. His main article of clothing was the universal shorts of the Xecho settler. But, being fashioned of saffron yellow, they were the more brilliant because of his darkness of skin. For he was not the warm brown of the Terran Negroes Dane had served beside, though he shared their general features. His flesh was really black, black with an almost bluish sheen. Instead of shirt or tunic, his deep chest was crossed by two wide straps, the big medallion marking their intersection giving forth flashes of gem fire when he breathed. He wore at his belt not the standard stun gun of a spaceman, but a weapon which resembled the more deadly Patrol blaster, as well as a long knife housed in a jeweled and fringed sheath. [Pg 7]To the eye he was an example of barbaric force tamed and trimmed to civilized efficiency.

He saluted, palm out, and spoke Galactic Basic with only a suggestion of accent.

"I am Kort Asaki. I believe Captain Jellico expects me."

"Yes, sir!" Dane snapped to attention. So this was the Chief Ranger from fabulous Khatka, Xecho's sister planet.

The other ascended the cat ladder easily, missing no detail of the ship's interior as he passed. His expression was still one of polite interest as his guide rapped on the panel door of Jellico's cabin. And a horrible screech from Queex, the captain's pet hoobat, drowned out any immediate answer. Then followed that automatic thump on the floor of the blue-feathered, crab-parrot-toad's cage, announcing that its master was in residence.

Since the captain's cordial welcome extended only to his guest, Dane regretfully descended to the mess cabin to make unskilled preparations for supper—though there was not much you could do to foul up concentrates in an automatic cooker.

"Company?" Tau sat beyond the cooking unit nursing a mug of Terran coffee. "And do you have to serve music with the meals, especially that particular selection?"

Dane flushed, stopped whistling in mid-note. "Terra Bound" was old and pretty well worn out; he didn't know why he always unconsciously sounded off with that.

"A Chief Ranger from Khatka just came on board," he reported, carefully offhand, as he busied himself reading labels. He knew better than to serve fish or any of its derivatives in disguise again.

"Not on a Free Trader's pay," commented Dane.

"You can always hope to make a big strike, boy. But what I wouldn't give to lift ship for there!"

"Why? You're no hunter. How come you want to heat jets for that port?"

"Oh, I don't care about the game preserves, though they're worth seeing, too. It's the people themselves—"

"But they're Terran settlers, or at least from Terran stock, aren't they?"

"Sure," Tau sipped his coffee slowly. "But there are settlers and settlers, son. And a lot depends upon when they left Terra and why, and who they were—also what happened to them after they landed out here."

"And Khatkans are really special?"

"Well, they have an amazing history. The colony was founded by escaped prisoners—and just one racial stock. They took off from Earth close to the end of the Second Atomic War. That was a race war, remember? Which made it doubly ugly." Tau's mouth twisted in disgust. "As if the color of a man's skin makes any difference in what lies under it! One side in that line-up tried to take over Africa—herded most of the natives into a giant concentration camp and practiced genocide on a grand scale. Then they were cracked themselves, hard and heavy. During the confusion some survivors in the camp staged a revolt, helped by the enemy. They captured an experimental station hidden in the center of the camp and made a break into space in two ships which had been built there. That voyage must have been a nightmare, but they were desperate. Somehow they made it out here to the rim and set down on Khatka without power enough to take off again—and by then most of them were dead.

"But we humans, no matter what our race, are a tough breed. The refugees discovered that climatically their new world was not too different from Africa, a lucky chance which might happen only once in a thousand times. So they thrived, the handful who survived. But the white technicians they had kidnaped to run the ships didn't. For they set up a color bar in reverse. The lighter your skin, the lower you were in the social scale. By that kind of selective breeding the present Khatkans are very dark indeed.

"They reverted to the primitive for survival. Then, about two hundred years ago, long before the first Survey Scout discovered them, something happened. Either the parent race mutated, or, as sometimes occurs, a line of people of superior gifts emerged—not in a few isolated births, but with surprising regularity in five family clans. There was a short period of power struggle until they realized the foolishness of civil war and formed an oligarchy, heading a loose tribal organization. With the Five Families to push and lead, a new civilization developed, and when Survey came to call they were no longer savages. Combine bought the trade rights about seventy-five years ago. Then the Company and the Five Families got together and marketed a luxury item to the galaxy. You know how every super-jet big shot on twenty-five planets wants to say he's hunted on Khatka. And if he can point out a graz head on his wall, or wear a tail bracelet, he's able to strut with the best. To holiday on Khatka is both fabulous and fashionable—and very, very profitable for the natives and for Combine who sells transportation to the travelers."

"I hear they have poachers, too," Dane remarked.

"Yes, that naturally follows. You know what a glam skin brings on the market. Wherever you have a rigidly controlled export you're going to have poachers and smugglers. But the Patrol doesn't go to Khatka. The natives handle their own criminals. Personally, I'd cheerfully take a ninety-nine-year sentence in the Lunar mines in place of what the Khatkans dish out to a poacher they net!"

"So that rumor has spread satisfactorily!"

Coffee slopped over the brim of Tau's mug and Dane dropped the packet of steak concentrate he was about to feed into the cooker. Chief Ranger Asaki loomed in the doorway of the mess as suddenly as if he had been teleported to that point.

The medic arose to his feet and smiled politely at the visitor.

"Do I detect in that observation, sir, the suggestion that the tales I have heard were deliberately set to blast where they would do the most good as deterrents?"

A fleeting grin broke the impassive somberness of the black face.

"I was informed you are a man skilled in 'magic,' Medic. You certainly display the traditional sorcerer's quickness of wit. But this rumor is also truth." The quirk of good humor had gone again, and there was an edge in the Chief Ranger's voice which cut. "Poachers on Khatka would welcome the Patrol in place of the attention they now receive."

He came into the mess cabin, Jellico behind him, and Dane pulled down two of the snap seats. He was holding a mug under the spout 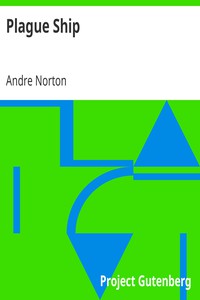