Transcriber's note:
This etext was produced from the 1962 book publication of the story, which was originally published in Analog Science Fact—Science Fiction, Sept.–Nov. 1961. Extensive research did not uncover any evidence that the copyright on this publication was renewed.

Brion entered the temple and stood as if rooted to the ground. There was a horror in this place—it clung to everything. Muffled and hooded men stood silent and unmoving about the room, their attention rigidly focused on a figure in the center. Brion wondered how he knew they were men—only their eyes showed, eyes completely empty of expression yet somehow reminding him of a bird of prey.

Then suddenly the figure in the center moved. It was a weird, crazily menacing action—and in an instant Brion knew he had found the enemy, the source of the evil that infected the PLANET OF THE DAMNED.

Bantam Books by Harry Harrison
Ask your bookseller for the books you have missed.

PLANET OF
THE DAMNED

PLANET OF THE DAMNED

All rights reserved.
Copyright © 1962, by Harry Harrison.
This book may not be reproduced in whole or in part, by
mimeograph or any other means, without permission.
For information address: Bantam Books, Inc.

Published simultaneously in the United States and Canada

Bantam Books are published by Bantam Books, Inc., a National General company. Its trade-mark, consisting of the words "Bantam Books" and the portrayal of a bantam, is registered in the United States Patent Office and in other countries. Marca Registrada. Bantam Books, Inc., 666 Fifth Avenue, New York, N.Y. 10019.

PRINTED IN THE UNITED STATES OF AMERICA [Pg 5]

For my Mother and Father—

A man said to the universe:
"Sir, I exist!"
"However" replied the universe,
"The fact has not created in me
A sense of obligation."

Sweat covered Brion's body, trickling into the tight loincloth that was the only garment he wore. The light fencing foil in his hand felt as heavy as a bar of lead to his exhausted muscles, worn out by a month of continual exercise. These things were of no importance. The cut on his chest, still dripping blood, the ache of his overstrained eyes—even the soaring arena around him with the thousands of spectators—were trivialities not worth thinking about. There was only one thing in his universe: the button-tipped length of shining steel that hovered before him, engaging his own weapon. He felt the quiver and scrape of its life, knew when it moved and moved himself to counteract it. And when he attacked, it was always there to beat him aside.

A sudden motion. He reacted—but his blade just met air. His instant of panic was followed by a small sharp blow high on his chest.

"Touch!" A world-shaking voice bellowed the word to a million waiting loudspeakers, and the applause of the audience echoed back in a wave of sound.

"One minute," a voice said, and the time buzzer sounded.

Brion had carefully conditioned the reflex in himself. A minute is not a very large measure of time and his body needed every fraction of it. The buzzer's whirr triggered his muscles into complete relaxation. Only his heart and lungs worked on at a[Pg 7] strong, measured rate. His eyes closed and he was only distantly aware of his handlers catching him as he fell, carrying him to his bench. While they massaged his limp body and cleansed the wound, all of his attention was turned inward. He was in reverie, sliding along the borders of consciousness. The nagging memory of the previous night loomed up then, and he turned it over and over in his mind, examining it from all sides.

It was the very unexpectedness of the event that had been so unusual. The contestants in the Twenties needed undisturbed rest, therefore nights in the dormitories were as quiet as death. During the first few days, of course, the rule wasn't observed too closely. The men themselves were too keyed up and excited to rest easily. But as soon as the scores began to mount and eliminations cut into their ranks, there was complete silence after dark. Particularly so on this last night, when only two of the little cubicles were occupied, the thousands of others standing with dark, empty doors.

Angry words had dragged Brion from a deep and exhausted sleep. The words were whispered but clear—two voices, just outside the thin metal of his door. Someone spoke his name.

"... Brion Brandd. Of course not. Whoever said you could was making a big mistake and there is going to be trouble—"

"Don't talk like an idiot!" The other voice snapped with a harsh urgency, clearly used to command. "I'm here because the matter is of utmost importance, and Brandd is the one I must see. Now stand aside!"

"I don't give a damn about your games, hearty cheers and physical exercises. This is important, or I wouldn't be here!"

The other didn't speak—he was surely one of the officials—and Brion could sense his outraged anger. He must have drawn his gun, because the intruder said quickly, "Put that away. You're being a fool!"

"Out!" was the single snarled word of the response.[Pg 8] There was silence then and, still wondering, Brion was once more asleep.

The voice chopped away Brion's memories and he let awareness seep back into his body. He was unhappily conscious of his total exhaustion. The month of continuous mental and physical combat had taken its toll. It would be hard to stay on his feet, much less summon the strength and skill to fight and win a touch.

"How do we stand?" he asked the handler who was kneading his aching muscles.

"Four-four. All you need is a touch to win!"

"That's all he needs too," Brion grunted, opening his eyes to look at the wiry length of the man at the other end of the long mat. No one who had reached the finals in the Twenties could possibly be a weak opponent, but this one, Irolg, was the pick of the lot. A red-haired mountain of a man, with an apparently inexhaustible store of energy. That was really all that counted now. There could be little art in this last and final round of fencing. Just thrust and parry, and victory to the stronger.

Brion closed his eyes again and knew the moment he had been hoping to avoid had arrived.

Every man who entered the Twenties had his own training tricks. Brion had a few individual ones that had helped him so far. He was a moderately strong chess player, but he had moved to quick victory in the chess rounds by playing incredibly unorthodox games. This was no accident, but the result of years of work. He had a standing order with off-planet agents for archaic chess books, the older the better. He had memorized thousands of these ancient games and openings. This was allowed. Anything was allowed that didn't involve drugs or machines. Self-hypnosis was an accepted tool.

It had taken Brion over two years to find a way to tap the sources of hysterical strength. Common as the phenomenon seemed to be in the textbooks, it proved impossible to duplicate. There appeared to be an immediate association with the death-trauma, as if[Pg 9] the two were inextricably linked into one. Berserkers and juramentados continue to fight and kill though carved by scores of mortal wounds. Men with bullets in the heart or brain fight on, though already clinically dead. Death seemed an inescapable part of this kind of strength. But there was another type that could easily be brought about in any deep trance—hypnotic rigidity. The strength that enables someone in a trance to hold his body stiff and unsupported except at two points, the head and heels. This is physically impossible when conscious. Working with this as a clue, Brion had developed a self-hypnotic technique that allowed him to tap this reservoir of unknown strength—the source of "second wind," the survival strength that made the difference between life and death.

It could also kill—exhaust the body beyond hope of recovery, particularly when in a weakened condition as his was now. But that wasn't important. Others had died before during the Twenties, and death during the last round was in some ways easier than defeat.

Breathing deeply, Brion softly spoke the auto-hypnotic phrases that triggered the process. Fatigue fell softly from him, as did all sensations of heat, cold and pain. He could feel with acute sensitivity, hear, and see clearly when he opened his eyes.

With each passing second the power drew at the basic reserves of life, draining it from his body.

When the buzzer sounded he pulled his foil from his second's startled grasp, and ran forward. Irolg had barely time to grab up his own weapon and parry Brion's first thrust. The force of his rush was so great that the guards on their weapons locked, and their bodies crashed together. Irolg looked amazed at the sudden fury of the attack—then smiled. He thought it was a last burst of energy, he knew how close they both were to exhaustion. This must be the end for Brion.

They disengaged and Irolg put up a solid defense. He didn't attempt to attack, just let Brion wear himself out against the firm shield of his defense.[Pg 10]

Brion saw something close to panic on his opponent's face when the man finally recognized his error. Brion wasn't tiring. If anything, he was pressing the attack. A wave of despair rolled out from Irolg—Brion sensed it and knew the fifth point was his.

Thrust—thrust—and each time the parrying sword a little slower to return. Then the powerful twist that thrust it aside. In and under the guard. The slap of the button on flesh and the arc of steel that reached out and ended on Irolg's chest over his heart.

Waves of sound—cheering and screaming—lapped against Brion's private world, but he was only remotely aware of their existence. Irolg dropped his foil, and tried to shake Brion's hand, but his legs suddenly gave way. Brion had an arm around him, holding him up, walking towards the rushing handlers. Then Irolg was gone and he waved off his own men, walking slowly by himself.

Except that something was wrong and it was like walking through warm glue. Walking on his knees. No, not walking, falling. At last. He was able to let go and fall.[Pg 11]

Ihjel gave the doctors exactly one day before he went to the hospital. Brion wasn't dead, though there had been some doubt about that the night before. Now, a full day later, he was on the mend and that was all Ihjel wanted to know. He bullied and strong-armed his way to the new Winner's room, meeting his first stiff resistance at the door.

"You're out of order, Winner Ihjel," the doctor said. "And if you keep on forcing yourself in here, where you are not wanted, rank or no rank, I shall be obliged to break your head."

Ihjel had just begun to tell him, in some detail, just how slim his chances were of accomplishing that, when Brion interrupted them both. He recognized the newcomer's voice from the final night in the barracks.

"Let him in, Dr. Caulry," he said. "I want to meet a man who thinks there is something more important than the Twenties."

While the doctor stood undecided, Ihjel moved quickly around him and closed the door in his flushed face. He looked down at the Winner in the bed. There was a drip plugged into each one of Brion's arms. His eyes peered from sooty hollows;

Planet of the Damned by Harry Harrison (books to read to be successful .TXT) 📕 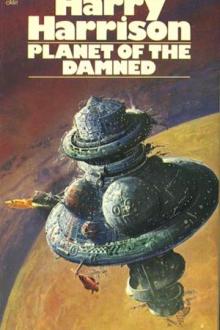