1 2 3 4 5 6 7 8 9 10 ... 46
Go to page:
*** START OF THIS PROJECT GUTENBERG EBOOK ALL AROUND THE MOON *** Produced by Afra Ullah, Taavi Kalju and the Online Distributed Proofreading Team at https://www.pgdp.net
ALL AROUND THE MOON FROM THE FRENCH OF JULES VERNE AUTHOR OF "FROM THE EARTH TO THE MOON", "TO THE SUN!" AND "OFF ON A COMET!" BY EDWARD ROTH ILLUSTRATED PHILADELPHIA
DAVID MCKAY, PUBLISHER
23 SOUTH NINTH STREET
CONTENTS.
CONTENTS LIST OF ILLUSTRATIONS PRELIMINARY CHAPTER CHAPTER I. FROM 10 P.M. TO 10. 46' 40'' CHAPTER II. THE FIRST HALF HOUR CHAPTER III. THEY MAKE THEMSELVES AT HOME AND FEEL QUITE COMFORTABLE CHAPTER IV. FOR THE CORNELL GIRLS CHAPTER V. THE COLDS OF SPACE CHAPTER VI. INSTRUCTIVE CONVERSATION CHAPTER VII. A HIGH OLD TIME CHAPTER VIII. THE NEUTRAL POINT CHAPTER IX. A LITTLE OFF THE TRACK CHAPTER X. THE OBSERVERS OF THE MOON CHAPTER XI. FACT AND FANCY CHAPTER XII. A BIRD'S EYE VIEW OF THE LUNAR MOUNTAINS CHAPTER XIII. LUNAR LANDSCAPES CHAPTER XIV. A NIGHT OF FIFTEEN DAYS CHAPTER XV. GLIMPSES AT THE INVISIBLE CHAPTER XVI. THE SOUTHERN HEMISPHERE CHAPTER XVII. TYCHO CHAPTER XVIII. PUZZLING QUESTIONS CHAPTER XIX. IN EVERY FIGHT, THE IMPOSSIBLE WINS CHAPTER XX. OFF THE PACIFIC COAST CHAPTER XXI. NEWS FOR MARSTON! CHAPTER XXII. ON THE WINGS OF THE WIND CHAPTER XXIII. THE CLUB MEN GO A FISHING CHAPTER XXIV. FAREWELL TO THE BALTIMORE GUN CLUB LIST OF ILLUSTRATIONS.
1. HIS FIRST CARE WAS TO TURN ON THE GAS 2. DIANA AND SATELLITE 3. HE HELPED ARDAN TO LIFT BARBICAN 4. MORE HUNGRY THAN EITHER 5. THEY DRANK TO THE SPEEDY UNION OF THE EARTH AND HER SATELLITE 6. DON'T I THOUGH? MY HEAD IS SPLITTING WITH IT! 7. POOR SATELLITE WAS DROPPED OUT 8. THE BODY OF THE DOG THROWN OUT YESTERDAY 9. A DEMONIACAL HULLABALOO 10. THE OXYGEN! HE CRIED 11. A GROUP à la Jardin Mabille 12. AN IMMENSE BATTLE-FIELD PILED WITH BLEACHING BONES 13. NEVERTHELESS THE SOLUTION ESCAPED HIM 14. IT'S COLD ENOUGH TO FREEZE A WHITE BEAR 15. THEY COULD UTTER NO WORD, THEY COULD BREATHE NO PRAYER 16. THEY SEEMED HALF ASLEEP IN HIS VITALIZING BEAMS 17. THESE ARCHES EVIDENTLY ONCE BORE THE PIPES OF AN AQUEDUCT 18. ARDAN GAZED AT THE PAIR FOR A FEW MINUTES 19. OLD MAC DISCOVERED TAKING OBSERVATIONS 20. FOR A SECOND ONLY DID THEY CATCH ITS FLASH 21. HOW IS THAT FOR HIGH? 22. EVERYWHERE THEIR DEPARTURE WAS ACCOMPANIED WITH THE MOST TOUCHING SYMPATHY PRELIMINARY CHAPTER, RESUMING THE FIRST PART OF THE WORK AND SERVING AS AN INTRODUCTION TO THE SECOND.

A few years ago the world was suddenly astounded by hearing of an experiment of a most novel and daring nature, altogether unprecedented in the annals of science. The BALTIMORE GUN CLUB, a society of artillerymen started in America during the great Civil War, had conceived the idea of nothing less than establishing direct communication with the Moon by means of a projectile! President Barbican, the originator of the enterprise, was strongly encouraged in its feasibility by the astronomers of Cambridge Observatory, and took upon himself to provide all the means necessary to secure its success. Having realized by means of a public subscription the sum of nearly five and a half millions of dollars, he immediately set himself to work at the necessary gigantic labors.

In accordance with the Cambridge men's note, the cannon intended to discharge the projectile was to be planted in some country not further than 28° north or south from the equator, so that it might be aimed vertically at the Moon in the zenith. The bullet was to be animated with an initial velocity of 12,000 yards to the second. It was to be fired off on the night of December 1st, at thirteen minutes and twenty seconds before eleven o'clock, precisely. Four days afterwards it was to hit the Moon, at the very moment that she reached her perigee, that is to say, her nearest point to the Earth, about 228,000 miles distant.

The leading members of the Club, namely President Barbican, Secretary Marston, Major Elphinstone and General Morgan, forming the executive committee, held several meetings to discuss the shape and material of the bullet, the nature and position of the cannon, and the quantity and quality of the powder. The decision soon arrived at was as follows: 1st—The bullet was to be a hollow aluminium shell, its diameter nine feet, its walls a foot in thickness, and its weight 19,250 pounds; 2nd—The cannon was to be a columbiad 900 feet in length, a well of that depth forming the vertical mould in which it was to be cast, and 3rd—The powder was to be 400 thousand pounds of gun cotton, which, by developing more than 200 thousand millions of cubic feet of gas under the projectile, would easily send it as far as our satellite.

These questions settled, Barbican, aided by Murphy, the Chief Engineer of the Cold Spring Iron Works, selected a spot in Florida, near the 27th degree north latitude, called Stony Hill, where after the performance of many wonderful feats in mining engineering, the Columbiad was successfully cast.

Things had reached this state when an incident occurred which excited the general interest a hundred fold.

A Frenchman from Paris, Michel Ardan by name, eccentric, but keen and shrewd as well as daring, demanded, by the Atlantic telegraph, permission to be enclosed in the bullet so that he might be carried to the Moon, where he was curious to make certain investigations. Received in America with great enthusiasm, Ardan held a great meeting, triumphantly carried his point, reconciled Barbican to his mortal foe, a certain Captain M'Nicholl, and even, by way of clinching the reconciliation, induced both the newly made friends to join him in his contemplated trip to the Moon.

The bullet, so modified as to become a hollow conical cylinder with plenty of room inside, was further provided with powerful water-springs and readily-ruptured partitions below the floor, intended to deaden the dreadful concussion sure to accompany the start. It was supplied with provisions for a year, water for a few months, and gas for nearly two weeks. A self-acting apparatus, of ingenious construction, kept the confined atmosphere sweet and healthy by manufacturing pure oxygen and absorbing carbonic acid. Finally, the Gun Club had constructed, at enormous expense, a gigantic telescope, which, from the summit of Long's Peak, could pursue the Projectile as it winged its way through the regions of space. Everything at last was ready.

On December 1st, at the appointed moment, in the midst of an immense concourse of spectators, the departure took place, and, for the first time in the world's history, three human beings quitted our terrestrial globe with some possibility in their favor of finally reaching a point of destination in the inter-planetary spaces. They expected to accomplish their journey in 97 hours, 13 minutes and 20 seconds, consequently reaching the Lunar surface precisely at midnight on December 5-6, the exact moment when the Moon would be full.

Unfortunately, the instantaneous explosion of such a vast quantity of gun-cotton, by giving rise to a violent commotion in the atmosphere, generated so much vapor and mist as to render the Moon

Off on a Comet! a Journey through Planetary Space by Jules Verne (free children's ebooks pdf .txt) 📕 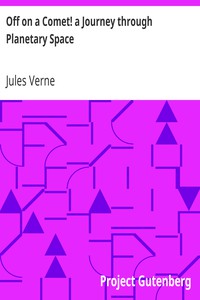 Off on a Comet by Jules Verne (best non fiction books to read .TXT) 📕 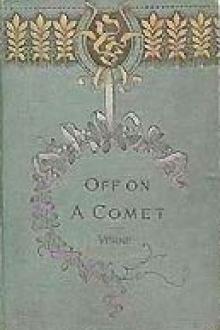