THE CREDO OF LOVE.

A COUPLE OF SINGERS.

FRAGMENT OF A WOMAN'S LETTER

THE CONFIDENCES OF AN ACADEMIC COAT.

Stretched at full length, on the great divan of a studio, cigar in mouth, two friends—a poet and a painter—were talking together one evening after dinner.

It was the hour of confidences and effusion. The lamp burned softly beneath its shade, limiting its circle of light to the intimacy of the conversation, leaving scarcely distinct the capricious luxury of the vast walls, cumbered with canvases, hangings, panoplies, surmounted by a glass roof through which the sombre blue shades of the night penetrated unhindered. The portrait of a woman, leaning slightly forward, as if to listen, alone stood out a little from the shadow; young with intelligent eyes, a grave and sweet mouth and a spirituel smile which seemed to defend the husband's easel from fools and disparagers. A low chair pushed away from the fire, two little blue shoes lying on the carpet, indicated also the presence of a child in the house; and indeed from the next room, within which mother and child had but just disappeared, came occasional bursts of soft laughter, of childish babble; the pretty flutterings of a nest going off to sleep. All this shed over the artistic interior a vague perfume of family happiness which the poet breathed in with delight:

"Decidedly, my dear fellow?" he said to his friend, "you were in the right. There are no two ways of being happy. Happiness lies in this and in nothing else. You must find me a wife!"

Good Heavens, no! not on any account. Find one for yourself, if you are bent upon it. As for me, I will have nothing to do with it.

Because—because artists ought never to marry.

That's rather too good. You dare to say that, and the lamp does not go out suddenly, and the walls don't fall down upon your head! But just think, wretch, that for two hours past, you have been setting before me the enviable spectacle of the very happiness you forbid me. Are you by chance like those odious millionaires whose well-being is in-creased by the sufferings of others, and who better enjoy their own fireside when they reflect that it is raining out of doors, and that there are plenty of poor devils without a shelter?

Think of me what you will. I have too much affection for you to help you to commit a folly—an irreparable folly.

Come! what is it? You are not satisfied? And yet it seems to me that one breathes in happiness here, just as freely as one does the air of heaven at a country window.

You are right, I am happy, completely happy, I love my wife with all my heart. When I think of my child, I laugh aloud to myself with pleasure. Marriage for me has been a harbour of calm and safe waters, not one in which you make fast to a ring on the shore, at the risk of rusting there for ever, but one of those blue creeks where sails and masts are repaired for fresh excursions into unknown countries, I never worked as well as I have since my marriage. All my best pictures date from then.

My dear fellow, at the risk of seeming a coxcomb, I will say that I look upon my happiness as a kind of miracle, something abnormal and exceptional. Yes! the more I see what marriage is, the more I look back with terror at the risk I ran. I am like those who, ignorant of the dangers they have unwittingly gone through, turn pale when all is over, amazed at their own audacity.

But what then are these terrible dangers?

The first and greatest of all, is the loss or degradation of one's talent. This should count, I think, with an artist. For observe that at this moment, I am not speaking of the ordinary conditions of life. I grant you, that in general marriage is an excellent thing, and that the majority of men only begin to be of some account when the family circle completes them or makes them greater. Often, indeed, it is necessary to a profession. A bachelor lawyer cannot even be imagined. He would not have the needful air of weight and gravity. But for all of us, painters, poets, sculptors, musicians, who live outside of life, wholly occupied in studying it, in reproducing it, holding ourselves always a little remote from it, as one steps back from a picture the better to see it, I say that marriage can only be the exception. To that nervous, exacting, impressionable being, that child-man that we call an artist, a special type of woman, almost impossible to find, is needful, and the safest thing to do is not to look for her. Ah! how well our great Delacroix, whom you admire so much, understood that! What a fine existence was his, bounded by his studio wall, devoted exclusively to Art! I was looking the other day at his cottage at Champrosay and the prim little garden full of roses, where he sauntered alone for twenty years! It has the calm and the narrowness of celibacy. Well now! think for a moment of Delacroix married, father of a family, with all the preoccupations of children to bring up, of money matters, of illnesses; do you believe his work would have been the same?

You cite Delacroix, I reply Victor Hugo. Do you think that marriage hampered him for instance, while writing so many admirable books?

I think as a matter of fact, that marriage did not hamper him in anything. But all husbands have not the genius that obtains pardon, nor a halo of glory with which to dry the tears they cause to flow. It cannot be very amusing to be the wife of a genius. There are plenty of labourers' wives who are happier.

A curious thing, all the same, this special pleading against marriage, by a married man, who is happy in being so.

I repeat that I don't give myself as an example. My opinion is formed by all the sad things I have seen elsewhere; all the misunderstandings so frequent in the households of artists, and caused solely by their abnormal life. Look at that sculptor who, in full maturity of age and talent, has just exiled himself, leaving wife and children behind him. Public opinion condemns him, and certainly I offer no excuse for him. And, nevertheless, I can well understand how he arrived at such a point! Here was a fellow who adored his art, and had a horror of the world, and society. The wife, though amiable and intelligent, instead of shielding him from the social obligations he loathed, condemned him for some ten years to all the exactions they involved. Thus she induced him to undertake a lot of official busts, horrible respectabilities in velvet skull caps, frights of women utterly devoid of grace; she disturbed him ten times a day with importunate visitors, and then every evening laid out for him a dress suit and light gloves, and dragged him from drawing-room to drawing-room. You will tell me he could have rebelled, could have replied point-blank: "No!" But don't you know that the very fact of our sedentary existences leaves us more than other men dependent on domestic influence? The atmosphere of the home envelopes us, and if some touch of the ideal does not lighten it, soon wearies and drags us down. Moreover, the artist as a rule puts what force and energy he has into his work, and after his solitary and patient struggles, finds himself left with no will to oppose to the petty importunities of life. With him, feminine tyrannies have free play. No one is more easily conquered and subdued. Only, beware! He must not be made to feel the yoke too heavily. If one day the invisible bonds with which he is surreptitiously fettered are drawn too tight and arrest the artistic effort, he will all at once tear them asunder, and, mistrusting his own weakness, will fly like our sculptor, over the hills and far away.

The wife of this sculptor was astounded at his flight. The unhappy creature is still wondering: "What can I have done to him?" Nothing. She simply did not understand him. For it is not enough to be good and intelligent to be the true helpmate of an artist, A woman must also possess infinite tact, smiling abnegation; and all this is found only by a miracle in a young creature, curious though ignorant as regards life. She is pretty, she has married a well-known man, received everywhere; why should she not wish to show herself a little on his arm? Is it not quite natural? The husband, on the contrary, growing intolerant of society as his talent progresses, finding time short, and art engrossing, refuses to be exhibited. Behold them both miserable, and whether the man gives in or resists, his life is henceforward turned from its course, and from its tranquillity. Ah! how many of these ill-matched couples have I known, where the wife was sometimes executioner, sometimes victim, but more often executioner, and nearly always unwittingly so! The other evening I was at Dargenty's, the musician. There were but a few guests, and he was asked to play. Hardly had he begun one off those pretty mazurkas with a Polish rhythm, which make him the successor of Chopin, when his wife began to talk, quite low at first, then a little louder. By degrees the fire of conversation spread. At the end of a minute I was the only listener. Then he shut the piano, and said to me with a heart-rent smile: "It is always like this here—my wife does not care for music." Can you imagine anything more terrible than to marry a woman who does not care for your art? Take my word for it, my friend, and don't marry. You are alone, you are free; keep as precious things, your liberty and your loneliness.

That is all very well! You talk at your ease of solitude. Presently, when I am gone, if some idea occurs to you, you will gently follow it by the side of your dying embers, without feeling around you that atmosphere of isolation, so vast, so empty, that in it inspiration evaporates and disperses. And one may yet fear to be alone in the hours of work; but there are moments of discouragement and weariness, when one doubts oneself ones art even. That 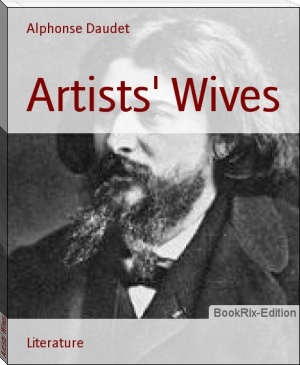 Fromont and Risler by Alphonse Daudet (i love reading txt) 📕 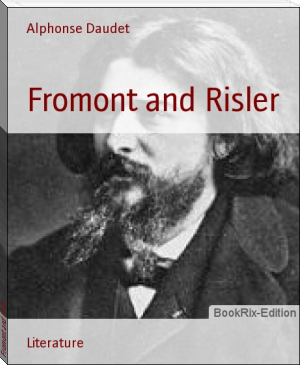