1 2 3 4 5 6 7 8 9 10 ... 161
Go to page:
The Project Gutenberg eBook, The Crown of Wild Olive, by John Ruskin
This eBook is for the use of anyone anywhere at no cost and with
almost no restrictions whatsoever. You may copy it, give it away or
re-use it under the terms of the Project Gutenberg License included
with this eBook or online at www.gutenberg.org


Title: The Crown of Wild Olive

also Munera Pulveris; Pre-Raphaelitism; Aratra Pentelici; The Ethics of the Dust; Fiction, Fair and Foul; The Elements of Drawing

***START OF THE PROJECT GUTENBERG EBOOK THE CROWN OF WILD OLIVE***

THE CROWN OF WILD OLIVE.

Notes on Political Economy of Prussia, 435

V. Tomb of the Doges Jacopo and Lorenzo Tiepolo, 333

VIII. The Apollo of Syracuse and the Self-made Man, 366

X. Marble Masonry in the Duomo of Verona, 381

XI. The First Elements of Sculpture, 382

XIV. Apollo and the Python. Heracles and the Nemean Lion, 400

XXI. The Beginnings of Chivalry, 409

THE CROWN OF WILD OLIVE THREE LECTURES ON WORK, TRAFFIC AND WAR PREFACE.

Twenty years ago, there was no lovelier piece of lowland scenery in South England, nor any more pathetic in the world, by its expression of sweet human character and life, than that immediately bordering on the sources of the Wandle, and including the lower moors of Addington, and the villages of Beddington and Carshalton, with all their pools and streams. No clearer or diviner waters ever sang with constant lips of the hand which 'giveth rain from heaven;' no pastures ever lightened in spring time with more passionate blossoming; no sweeter homes ever hallowed the heart of the passer-by with their pride of peaceful gladness—fain-hidden—yet full-confessed. The place remains, or, until a few months ago, remained, nearly unchanged in its larger features; but, with deliberate mind I say, that I have never seen anything so ghastly in its inner tragic meaning,—not in Pisan Maremma—not by Campagna tomb,—not by the sand-isles of the Torcellan shore,—as the slow stealing of aspects of reckless, indolent, animal neglect, over the delicate sweetness of that English scene: nor is any blasphemy or impiety—any frantic saying or godless thought—more appalling to me, using the best power of judgment I have to discern its sense and scope, than the insolent defilings of those springs by the human herds that drink of them. Just where the welling of stainless water, trembling and pure, like a body of light, enters the pool of Carshalton, cutting itself a radiant channel down to the gravel, through warp of feathery weeds, all waving, which it traverses with its deep threads of clearness, like the chalcedony in moss-agate, starred here and there with white grenouillette; just in the very rush and murmur of the first spreading currents, the human wretches of the place cast their street and house foulness; heaps of dust and slime, and broken shreds of old metal, and rags of putrid clothes; they having neither energy to cart it away, nor decency enough to dig it into the ground, thus shed into the stream, to diffuse what venom of it will float and melt, far away, in all places where God meant those waters to bring joy and health. And, in a little pool, behind some houses farther in the village, where another spring rises, the shattered stones of the well, and of the little fretted channel which was long ago built and traced for it by gentler hands, lie scattered, each from each, under a ragged bank of mortar, and scoria; and brick-layers' refuse, on one side, which the clean water nevertheless chastises to purity; but it cannot conquer the dead earth beyond; and there, circled and coiled under festering scum, the stagnant edge of the pool effaces itself into a slope of black slime, the accumulation of indolent years. Half-a-dozen men, with one day's work, could cleanse those pools, and trim the flowers about their banks, and make every breath of summer air above them rich with cool balm; and every glittering wave medicinal, as if it ran, troubled of angels, from the porch of Bethesda. But that day's work is never given, nor will be; nor will any joy be possible to heart of man, for evermore, about those wells of English waters.

When I last left them, I walked up slowly through the back streets of Croydon, from the old church to the hospital; and, just on the left, before coming up to the crossing of the High Street, there was a new public-house built. And the front of it was built in so wise manner, that a recess of two feet was left below its front windows, between them and the street-pavement—a recess too narrow for any possible use (for even if it had been occupied by a seat, as in old time it might have been, everybody walking along the street would have fallen over the legs of the reposing wayfarers). But, by way of making this two feet depth of freehold land more expressive of the dignity of an establishment for the sale of spirituous liquors, it was fenced from the pavement by an imposing iron railing, having four or five spearheads to the yard of it, and six feet high; containing as much iron and iron-work, indeed as could well be put into the space; and by this stately arrangement, the little piece of dead ground within, between wall and street, became a protective receptacle of refuse; cigar ends, and oyster shells, and the like, such as an open-handed English street-populace habitually scatters from its presence, and was thus left, unsweepable by any ordinary methods. Now the iron bars which, uselessly (or in great degree worse than uselessly), enclosed this bit of ground, and made it pestilent, represented a quantity of work which would have cleansed the Carshalton pools three times over;—of work, partly cramped and deadly, in the mine; partly fierce[1] and exhaustive, at the furnace; partly foolish and sedentary, of ill-taught students making bad designs: work from the beginning to the last fruits of it, and in all the branches of it, venomous, deathful, and miserable. Now, how did it come to pass that this work was done instead of the other; that the strength and life of the English operative were spent in defiling ground, instead of redeeming it; and in producing an entirely (in that place) valueless piece of metal, which can neither be eaten nor breathed, instead of medicinal fresh air, and pure water?

There is but one reason for it, and at present a conclusive one,—that the capitalist can charge per-centage on the work in the one case, and cannot in the other. If, having certain funds for supporting labour at my disposal, I pay men merely to keep my ground in order, my money is, in that function, spent once for all; but if I pay them to dig iron out of my ground, and work it, and sell it, I can charge rent for the ground, and per-centage both on the manufacture and the sale, and make my capital profitable in these three bye-ways. The greater part of the profitable investment of capital, in the present day, is in operations of this kind, in which the public is persuaded to buy something of no use to it, on production, or sale, of which, the capitalist may charge per-centage; the said public remaining all the while under the persuasion that the per-centages thus obtained are real national gains, whereas, they are merely filchings out of partially light pockets, to swell heavy ones.

Thus, the Croydon publican buys the iron railing, to make himself more conspicuous to drunkards. The public-housekeeper on the other side of the way presently buys another railing, to out-rail him with. Both are, as to their relative attractiveness to customers of taste, just where they were before; but they have lost the price of the railings; which they must either themselves finally lose, or make their aforesaid customers of taste pay, by raising the price of their beer, or adulterating it. Either the publicans, or their customers, are thus poorer by precisely what the capitalist has gained; and the value of the work itself, meantime, has been lost to the nation; the iron bars in that form and place being wholly useless. It is this mode of taxation of the poor by the rich which is referred to in the text (page 31), in comparing

The Elements of Drawing by John Ruskin (smart books to read .txt) 📕 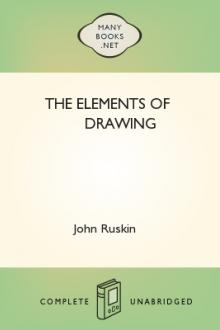