This etext was produced from Analog Science Fact Science Fiction, November, 1962. Extensive research did not uncover any evidence that the U.S. copyright on this publication was renewed. Anchorite by Johnathan Blake Mackenzie Illustrated by Schelling

There are two basic kinds of fools—the ones who know they are fools, and the kind that, because they do not know that, are utterly deadly menaces!

The mountain was spinning.

Not dizzily, not even rapidly, but very perceptibly, the great mass of jagged rock was turning on its axis.

Captain St. Simon scowled at it. "By damn, Jules," he said, "if you can see 'em spinning, it's too damn fast!" He expected no answer, and got none.

He tapped the drive pedal gently with his right foot, his gaze shifting alternately from the instrument board to the looming hulk of stone before him. As the little spacecraft moved in closer, he tapped the reverse pedal with his left foot. He was now ten meters from the surface of the asteroid. It was moving, all right. "Well, Jules," he said in his most commanding voice, "we'll see just how fast she's moving. Prepare to fire Torpedo Number One!"

He touched a button with his right thumb. The ship quivered almost imperceptibly as a jet of liquid leaped from the gun mounted in the nose of the ship. At the same time, he hit the reverse pedal and backed the ship away from the asteroid's surface. No point getting any more gunk on the hull than necessary.

The jet of liquid struck the surface of the rotating mountain and splashed, leaving a big splotch of silvery glitter. Even in the vacuum of space, the silicone-based solvents of the paint vehicle took time to boil off.

"How's that for pinpoint accuracy, Jules?"

"You may." He jockeyed the little spacecraft around until he was reasonably stationary with respect to the great hunk of whirling rock and had the silver-white blotch centered on the crosshairs of the peeper in front of him. Then he punched the button that started the timer and waited for the silver spot to come round again.

The asteroid was roughly spherical—which was unusual, but not remarkable. The radar gave him the distance from the surface of the asteroid, and he measured the diameter and punched it through the calculator. "Observe," he said in a dry, didactic voice. "The diameter is on the order of five times ten to the fourteenth micromicrons." He kept punching at the calculator. "If we assume a mean density of two point six six times ten to the minus thirty-sixth metric tons per cubic micromicron, we attain a mean mass of some one point seven four times ten to the eleventh kilograms." More punching, while he kept his eye on the meteorite, waiting for the spot to show up again. "And that, my dear Jules, gives us a surface gravity of approximately two times ten to the minus sixth standard gees."

Then there was a long, silent wait, while the asteroid went its leisurely way around its own axis.

"There it comes," said Captain St. Simon. He kept his eyes on the crosshair of the peeper, one hand over the timer button. When the silver splotch drifted by the crosshair, he punched the stop button and looked at the indicator.

"Sixteen minutes, forty seconds. How handy." He punched at the calculator again. "Ah! You see, Jules! Just as we suspected! Negative gees at the surface, on the equator, comes to ten to the minus third standard gees—almost exactly one centimeter per second squared. So?"

"Sukiyaki, my dear chap, sometimes your brilliance amazes me."

Well, at least it meant that there would be no loose rubble on the surface. It would have been tossed off long ago by the centrifugal force, flying off on a tangent to become more of the tiny rubble of the belt. Perhaps "flying" wasn't exactly the right word, though, when applied to a velocity of less than one centimeter per second. Drifting off, then.

"Waal, Ah reckon we can do it, cap'n. Ef'n we go to the one o' them thar poles ... well, let's see—" He leaned over and punched more figures into the calculator. "Ain't that purty! 'Cordin' ter this, thar's a spot at each pole, 'bout a meter in diameter, whar the gee-pull is greater than the centry-foogle force!"

Captain St. Simon looked at the figures on the calculator. The forces, in any case, were negligibly small. On Earth, where the surface gravity was ninety-eight per cent of a Standard Gee, St. Simon weighed close to two hundred pounds. Discounting the spin, he would weigh about four ten-thousandths of a pound on the asteroid he was inspecting. The spin at the equator would try to push him off with a force of about two tenths of a pound.

But a man who didn't take those forces into account could get himself killed in the Belt.

"Do you think they vill velcome us in Kraukau, Herr Erzbischof?"

The area around the North Pole—defined as that pole from which the body appears to be spinning counterclockwise—looked more suitable for operations than the South Pole. Theoretically, St. Simon could have stopped the spin, but that would have required an energy expenditure of some twenty-three thousand kilowatt-hours in the first place, and it would have required an anchor to be set somewhere on the equator. Since his purpose in landing on the asteroid was to set just such an anchor, stopping the spin would be a waste of time and energy.

Captain St. Simon positioned his little spacecraft a couple of meters above the North Pole. It would take better than six minutes to fall that far, so he had plenty of time. "Perhaps a boarding party, Mr. Christian! On the double!"

St. Simon pushed himself over to the locker, took out his vacuum suit, and climbed into it. After checking it thoroughly, he said: "Prepare to evacuate main control room, Mr. Christian!"

Captain St. Simon looked around to make sure he hadn't left a bottle of coffee sitting somewhere. He'd done that once, and the stuff had boiled out all over everywhere when he pulled the air out of the little room. Nope, no coffee. No obstacles to turning on the pump. He thumbed the button, and the pumps started to whine. The whine built up to a crescendo, then began to die away until finally it could only be felt through the walls or floor. The air was gone.

Then he checked the manometer to make sure that most of the air had actually been pumped back into the reserve tanks. Satisfied, he touched the button that would open the door. There was a faint jar as the remaining wisps of air shot out into the vacuum of space.

St. Simon sat back down at the controls and carefully repositioned the ship. It was now less than a meter from the surface. He pushed himself over to the open door and looked out.

He clipped one end of his safety cable to the steel eye-bolt at the edge of the door. "Fasten on carefully, Jules," he said. "We don't want to lose anything."

"Ah, but no, my old and raw; we could not afford to lose the so-dear Nancy Bell, could we?"

The other end of the long cable was connected to the belt of the suit. Then St. Simon launched himself out the open door toward the surface of the planetoid. The ship began to drift—very slowly, but not so slowly as it had been falling—off in the other direction.

He had picked the spot he was aiming for. There was a jagged hunk of rock sticking out that looked as though it would make a good handhold. Right nearby, there was a fairly smooth spot that would do to brake his "fall". He struck it with his palm and took up the slight shock with his elbow while his other hand grasped the outcropping.

He had not pushed himself very hard. There is not much weathering on the surface of an asteroid. Micro-meteorites soften the contours of the rock a little over the millions of millennia, but not much, since the debris in the Belt all has roughly the same velocity. Collisions do occur, but they aren't the violent smashes that make the brilliant meteor displays of Earth. (And there is still a standing argument among the men of the Belt as to whether that sort of action can be called "weathering".) Most of the collisions tend to cause fracturing of the surface, which results in jagged edges. A man in a vacuum suit does not push himself against a surface like that with any great velocity.

St. Simon knew to a nicety that he could propel himself against a bed of nails and broken glass at just the right velocity to be able to stop himself without so much as scratching his glove. And he could see that there was no ragged stuff on the spot he had selected. The slanting rays of the sun would have made them stand out in relief.

Now he was clinging to the surface of the mountain of rock like a bug on the side of a cliff. On a nickel-iron asteroid, he could have walked around on the surface, using the magnetic soles of his vacuum suit. But silicate rock is notably lacking in response to that attractive force. No soul, maybe.

The nickel-iron brutes were a dead cinch to haul off to the smelters. All a space tug had to do was latch on to one of them with a magnetic grapple and start hauling. There was no such simple answer for the silicate rocks.

The nickel-iron asteroids were necessary. They supplied the building material and the major export of the Belt cities. They averaged around eighty to ninety per cent iron, anywhere from five to twenty per cent nickel, and perhaps half a per cent cobalt, with smatterings of phosphorous, sulfur, carbon, copper, and chromium. Necessary—but not sufficient.

The silicate rocks ran only about twenty-five per cent iron—in the form of nonmagnetic compounds. They averaged eighteen per cent silicon, fourteen per cent magnesium, between one and one point five per cent each of aluminum, nickel, and calcium, and good-sized dollops of sodium, chromium, phosphorous, manganese, cobalt, potassium, and titanium.

But more important than these, as far as the immediate needs of the Belt cities were concerned, was a big, whopping thirty-six per cent oxygen. In the Belt cities, they had soon learned that, physically speaking, the stuff of life was not bread. And no matter how carefully oxygen is conserved, no process is one hundred per cent efficient. There will be leakage into space, and that which is lost must be replaced.

There is plenty of oxygen locked up in those silicates; the problem is towing them to the processing plants where the stuff can be extracted.

Captain St. Simon's job was simple. All he had to do was sink an anchor into the asteroid so that the space tugs could get a grip on it. Once he had done that, the rest of the job was up to the tug crew.

He crawled across the face of the floating mountain. At the spot where the North Pole was, he braced himself and then took a quick look around at the Nancy Bell. She wasn't moving very fast, 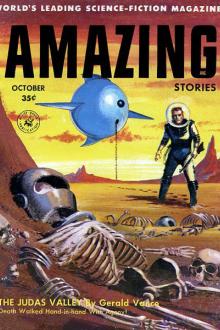